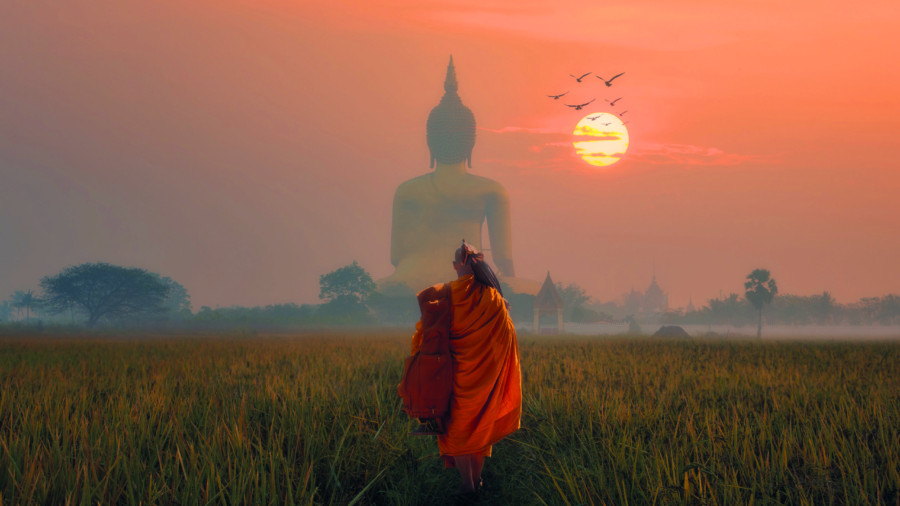 by Leah Russell
with no comment
Ancient wisdomModern teachers

To live in the full light of wisdom, bliss and fulfilment – to live life in enlightenment – is the natural birth right of every human being. Everyone yearns for the state of completion, a state of eternal contentment, lasting peace, and infinite fulfilment.

The following sloka from the Brihadaranyaka Upanisad expresses the innate inclination of every human heart:

“Lead me from the unreal to the Reality, from darkness to light, from death to immortality.”

The desire for enlightenment is planted deep within the soul. The entire ocean of humanity is moving toward higher levels of consciousness whether they are aware of it or not because evolution is a natural process of development from less knowledge to more knowledge, from less power to more power from less love to unbounded love.

The human nervous system is the most highly developed nervous system in creation. It is designed to express the infinite potential of human life: life in enlightenment. The human brain contains more interconnections between the neurons than there are atoms in the universe. Our senses of perception have the capacity to become refined enough to perceive the most subtle vibrations of matter and the ability to gain the vision of the divine emanating from the innermost sanctuary of the heart. The upward spiral of human evolution takes life from the state of separation, alienation, fear and anxiety to a state of unity, wholeness, happiness and harmony with natural law. The process of unfoldment of consciousness occurs in a sequential progression although one can have fleeting experiences of even the highest state of awareness before it is permanently established.

The fourth major state of consciousness is Pure consciousness or Turiya Chetana. It is the experience of the Atman or the Self. This is the simplest state of awareness, a state in which consciousness is wide awake within itself. Consciousness knows itself as an unbounded field of pure Being. This experience is available when the mind settles down to its least excited state during meditation. Usually the mind is filled with thoughts which can be compared to waves on the surface of the ocean. The process of meditation takes the mind to deeper, quieter levels of thinking until ultimately thought is transcended and one experiences the Self, the source of creativity and intelligence deep within. In this state, the apparent duality between the knower and known dissolves, and only “isness”, pure silence remains.

The process of transcending is described in the Katha Upanisad in this way:

There are layers of the mind from the gross to the subtle to the subtlest: senses, mind, intellect, personal ego, cosmic ego, pure consciousness. Pure Consciousness is a state beyond duality, a state of eternal peace and infinite silence.

As the mind becomes accustomed to diving deep into the silent layers of pure Being, the body is purified of deeply rooted stresses and it gradually gains the ability to maintain pure consciousness even in the midst of dynamic activity. This is the growth from the 4th state to the 5th state of consciousness called Cosmic Consciousness or Turyateet Chetana.

In the growth to Cosmic Consciousness, what is developing is more and more inner silence. The mind becomes steadfast in the silent wholeness of Pure Being. One is no longer like a football at the mercy of ever-changing situations and circumstances. One is anchored to the depths of the ocean of inner poise and equilibrium. One is not swinging like a pendulum between the opposing forces of gain and loss, joy and sorrow, pleasure and pain. When one acts, one acts in freedom, no longer bound to the cycle of action, impression and desire. This is the state of Self-realization. One knows oneself as that eternal, infinite unchanging wholeness of life and acts while fully established in the reality. Cosmic Consciousness is the fulfilment of Lord Krishna’s advice to Arjuna on the battlefield:

The Dasa Sloka of Adi Shankara describes the state of Self-realization:

“I am neither above nor below, neither inside nor outside, neither middle or across, neither the east nor the west; for I am indivisible and one by nature, and all-pervading like space. Therefore, I am That One, Auspicious and Pure, That Alone remains.”

As Cosmic Consciousness develops, one feels that everything is going by itself. One’s desires, which are always evolutionary, are automatically fulfilled without much effort. Whereas previously, one used to worry; one doesn’t worry. Life flows smoothly; it is almost as if nothing is happening. The final test of the final infusion of Pure Being into the mind is the experience of the Self even during the sleep state of consciousness. It is as if one witnesses the body sleeping. In this state, sleep is enjoyed much more than before because awareness is not shrouded by the heaviness of fatigue. In Cosmic Consciousness, the state of pure consciousness is lively 24 hours a day. An unbounded ocean of inner silence supports each individual wave of activity.

The experience of the Self or Atman is the foundation upon which the high edifice of enlightenment is erected. All spiritual traditions proclaim that the individual self (Atman) is one with the Cosmic Self (Brahman). The essence of the Upanishadic teaching is contained in the sloka: “Jivo Brahmaiva Naparah” – The individual self is identical to the universal Self – and “Tarati sokam atmavit” – The man of Self-realization alone transcends all sorrow.

All religions echo this truth of the identity between the individual self and Universal Self.

In Christianity, in the Old Testament, it is written: “Man is made in the image of God.”

And in the New Testament, we find the words of St. John, “I and my Father are one.”

In the Koran, it says: “I have only made man to adore me.”

In the Tao, it is written: “To be of heaven is to be in Tao, Tao is forever and he that possesses it, though his body ceases, is not destroyed.”

There are numerous experiences of God Consciousness recorded by saints from different cultures and all of them bear a striking resemblance to each other:

“The day of my spiritual awakening was the day I saw – and knew I saw – all things in God and God in all things.”

“The heart is nothing but the Sea of Light…the place of the vision of God.”

“Everything is mine, for all that is God’s seems to be wholly mine. I am mute and lost in God.”

“The infinite dwelling of the Infinite Being is everywhere: in earth, water, sky and air; Firm is the thunderbolt, the seat of the seeker is established above the void. He who is within is without: I see Him and none else.“

“The eyes of my soul were opened, and I beheld the plenitude of God, wherein I did comprehend the whole world, both here and beyond the sea, and the abyss and ocean and all things. In all these things I beheld naught but the divine power, in a manner assuredly indescribable, so that through excess of marvelling the soul cried with a loud voice, saying ‘This whole world is full of God.’”

“When the inward and outward are illumined, and all is clear, you are one with the light of sun and moon. When developed to an ultimate state, this is a round luminosity which nothing can deceive, the subtle body of a unified spirit, pervading the whole universe.”

“O wonder of wonders! When I think of the union of the soul with God… The divine love-spring surges over the soul, sweeping her out of herself into the unnamed being of her original source…”

These experiences attest to the grandeur and majesty of this heightened state of consciousness. The state of God Consciousness makes Cosmic Consciousness seem like a mere stepping stone to this exalted level of life, a life in adoration of the Divine Beloved. In this state, everywhere one looks, every object shines with the light of the divine.

In Cosmic Consciousness, the objective world is experienced as separate from the Self. It is an experience described by Maharishi as “I and my world.”

In God Consciousness, one experiences the celestial value of every object. The experience is “I and my God.”

The growth to enlightenment has been described as a pathless path because Being is omnipresent. The journey is from here to here.

Gaining enlightenment means simply to: Be Where You Are, to be fully in the present moment, fully aware, fully awake to who we really are. We are eternal, infinite, immortal, ever-free, ever-whole, ever-one with the universe. Enlightenment has been described as an experience of coming back home. We arrive at the source of our being and recognize who we really are. Maybe that is why Sri Ramana Maharshi said: “On the day of liberation, you will laugh but what is on the day of laughter is also now.”

Many years ago, whilst studying Sanskrit, I was living in a room on a rooftop in Varanasi. One night, I awoke in the middle of the night and gazed up at the star-studded sky. At that moment, my awareness expanded outwards to infinity. The Self was unbounded in all directions, beyond time and space. I began to laugh out loud. “How could I ever have thought I was limited to this small body? I am Infinite!” My heart was flooded with bliss. Although the experience was very powerful, it did not last. We may have many glimpses into higher states of consciousness on the path to enlightenment, but when the final goal is reached, it becomes a permanent reality, and a great blessing.

In the words of Sri Ramana Maharshi: “Your own Self-realization is the greatest service you can render the world.”

The individual who has gained enlightenment, whether he lives in a cave hidden in the Himalayas, or lives a contemplative life in a monastery, or lives an active life of service in the world, is like a lighthouse spreading a powerful influence of peace and harmony into the world, and contributing to the upliftment of the whole human race.

BARBARA ANN BRIGGS is a teacher of Transcendental Meditation. Her book, The Contribution of Maharishi’s Vedic Science to Complete Fulfilment in Life is available from maharishi.co.uk. Her novel of visionary fiction, Pilgrimage on the Path of Love, is the story of a woman on the spiritual path who travels alone to India.

Pilgrimage on the Path of Love by Barbara Ann Briggs, published by Roundfire, paperback (320 pages).