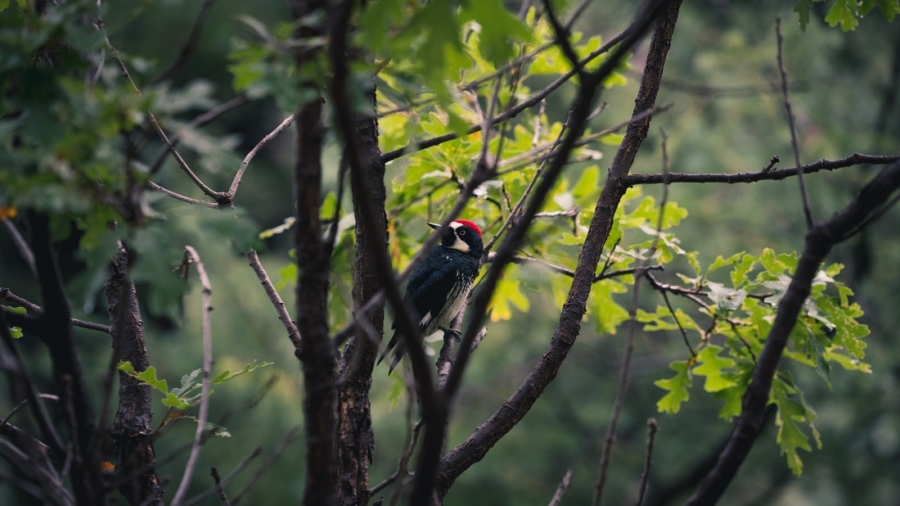 As I was enjoying the magnificent view of the rolling hills during my morning walk along he river in Exmoor Forest in the south of England, I saw a lone bird flying above the tree line. Its effortless movements, its soft cruising, and the way it created an imaginary track parallel to the trees seemed to be so harmonious with the rest of the landscape that I felt as if I were looking at a work of art.

The lone bird, the sky, the clouds, the trees, the sound of the nearby creek, the buzzing of insects and the chirping birds, all seemed to belong to a living three-dimensional painting. But not as in the idealized portrayals of nature we often see in photos or posters, or as in the renditions of the nineteenth-century Romantic artists. I experienced the whole view as a work of art in the grandest sense there is. I felt that it was the incarnation of Beauty itself; that it was an absolutely perfect work of art. And that the whole landscape I was witnessing, as it changed through the movements of clouds and birds, and through the hours of the day, and through the seasons, somehow unabatedly retained this character. I experienced all change as being a long series of perfect frames that were created by a master cinematographer for me to enjoy – one perfect natural painting being followed by another. The beauty of nature seemed to persist irrespective of how it all changed.

After a few minutes in this state, a disturbing thought appeared in my mind that seemed to destroy my blissful reverie: “Well, what about the laws of nature? Everything we see is just the expression of the laws of physics and biology. The clouds, the winds, the way trees grow and animals move – all are part of a universe in which the laws of nature reign. How can blind laws create, in and of themselves, such beauty? Beauty cannot simply happen. Otherwise, every event in the universe and everything that simply Is would already be Beauty, and the whole concept of art would become obsolete – there would be no way art could be distinguished from non-art and cut itself off from the mass of formless neutrality of Being or ugliness itself”.

No sooner had this thought formed than a unique answer arose from the deepest recesses of my soul, which transformed everything and solved all mysteries. An astonishing new possibility appeared for the first time: God created the universe to be Beauty itself, he conceived of it as an artist does, and later decided to make it conform to natural laws! The laws of nature are firstly insignificant, secondly irrelevant, and most importantly, an afterthought in the Creation. God first created Beauty and then physics. And since Beauty is identical to nature when nature is experienced in the manner that I was experiencing it at that moment, we may say that God created nature and then physics. Or, to make a more general statement, using the Greek word for ‘nature’: physis came before physics. Scientific laws are posterior to the universe as it is, or rather posterior to the universe as it was conceived: God created the universe in a single act of inspiration and then decided to associate, allocate, and attach laws to it in order to ‘explain it’. For the laws of nature explain neither Being nor the Becoming. The laws are, as some philosophers have already pointed out, descriptive of what already Is. The laws of nature discovered by man simply place reality within a self-contained system of abstract interconnectedness that purports to establish the forms that relationships take. However, those relationships are what they are before we attempt to relate them and “discover” their underlying laws.

I was now certain: God made everything there is according to his own whim! In other words, he created the universe according to his artistic inspiration, and then he found and founded the natural laws. The laws are not prior to the Creation, guiding and directing it; they are the posterior consequence of the divinely inspired Creation. It is not the Creation that conforms to laws, but the laws that conform to the Creation. The universe is not a mechanical derivation of an original mathematical singularity emanating from a Big Bang from which forces and laws arose to govern all movements. Rather, it is the result of a creative act, similar, if not identical, to that of a human artist. That is the crux.

The Creation is foremostly Beauty. God is primarily an artist. Science follows art, and is irrelevant to what Is: for what exists would still have existed independent of our particular science, in the sense that if different laws were necessary for the universe to be in the manner it Is, those would have been provided instead, in order to explain the existence of what was originally conceived. God became a scientist in order to sustain his artistic creation.

Nicos Hadjicostis studied physics at King’s College, London. For over a decade, he managed the largest media group in his birthplace of Cyprus. In 2003, he left his country in order to explore the world and himself. He traveled around the world continuously for 6.5 years, without backtracking, or returning to his point of departure. His aim was to treat the world as if it were one huge country, a single destination. He explored 70 countries on 6 continents delving deep into their people, cultures, and natural wonders. This life-transforming journey inspired his first book, Destination Earth. He is now a writer and a world-traveler.