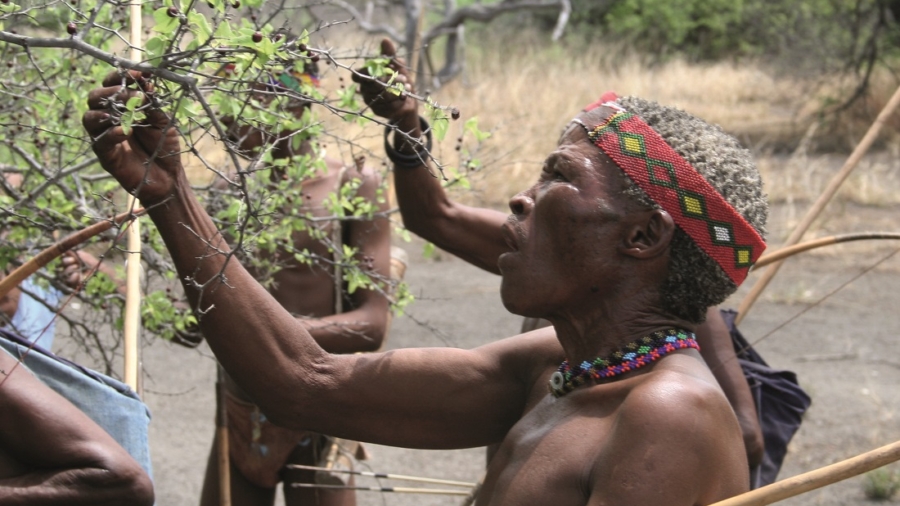 My journey with Primal Awareness began 10 years ago when I took a safari trip to the Okavango Delta in Botswana. While there I met with a Bayei guide who later took me on a private mokoro (dug-out canoe) trip deep into the heart of the Okavango Delta where I met with an ancient River Bushman known as Keikanamang, the last of his race who had still lived by the old ways.

Intrigued by this experience, I then decided to take further trips to see if I could find Bushmen who were still living in a traditional way. What I subsequently discovered was that many of the ancient traditions still survived, but that none of the Bushmen were still living a completely natural life away from the trappings and constraints of modern civilization. My search then took me to other parts of the globe, to the forests of the Western Ghats in India and to the steamy jungles of Borneo where I spent some time staying with the nomadic Penan people.

I explored many other ancient cultures, including the Himba of Namibia and the Hopi of Arizona until my journey eventually led me to Australia where I immersed myself in Aboriginal culture, surely one of the most ancient and best preserved cultures in the world. It was then that the question was posed to me by an Australian friend: how did we in the West become so separated from nature? The Aboriginal people just couldn’t comprehend our way of thinking, and likewise we had almost no understanding of their ways. It was as if we were living in two completely separate worlds that were unintelligible to each other.

I realised that once, long ago, Europeans must have lived close to nature too, and that like the Aborigines, the Penan and the Bushmen, we must also have had an animist belief system; a knowledge that everything has a spirit, that everything is connected to spirit and that everything is a part of a greater consciousness, sometimes called the ‘Great Spirit’. All of the most ancient and primitive cultures in the world shared this belief system, and in fact the human race evolved with this primal awareness of spirit and spiritual connection, so at the very least it must have served some kind of evolutionary purpose to possess this knowledge.

So the next question was: where did it all go wrong for us? How did we become so separated from nature and the world of spirit? How did we come to abandon a belief system that had served us well for thousands of years, and how did a symbiotic relationship with nature become replaced with a need to dominate and control nature?

When confronted with these questions the natural human response is to look for simple answers. Surely it was when we started farming that everything changed; or when we started living in towns and cities? But the deeper I looked into the subject the more I realised that there were no simple answers. Things did not suddenly change overnight; the process took many thousands of years and took on many shades of grey.

I started by going back to the absolute basics. What separates us from the animals? I realised that what is unique about the human race is that we use words and language, and that we form these into stories that then become our reality. In effect we start living in our stories and no longer just in the phenomenal world of real life processes. Soon enough our stories become our culture; and our culture forms our personal identity and our experience of reality.

From this starting point I eventually identified nineteen different ways in which we in the West have become separated from nature; starting with words, language and stories, and ending today with modern technology, smart phones and interaction through screens, which further separate us from the natural world and from natural interaction with each other.

I also realised that all cultures nowadays, even the tribal ones, are to some greater or lesser extent separated from nature and the world of spirit. It is all just a matter of degree. The nomadic hunter-gatherer, unhindered and free to roam the wild expanses of the Earth, simply no longer exists in our modern world. Inspiration can be taken from those tribes who are living as close to nature as possible, but all of them now have some contact, either direct or indirect, with the outside world and with the taint of civilized society.

The Bushmen, the Penan and the Aborigines now all make use of modern consumer goods, modern hospitals and even mobile phones! But their culture never went through all the stages of separation that Western culture went through.  They never farmed or organised into hierarchical societies, they never accumulated wealth or had a priesthood impose a dogmatic religion upon them. They never built towns and cities to live in or engaged in organised wars of conquest, and neither did they engage in the abstraction of written language. They never felt a need to analyse the world scientifically, or to pick things apart to see how they worked. They simply coexisted with the natural environment and felt guided by the spirits.

As I take the reader through these 19 levels of separation I suggest exercises that will enable us to roll back each of these layers of separation and connect us once again with the world of spirit. But this is no easy task. We have all been programmed from birth, and our whole experience of reality is based upon the Western mindset that we have been born into. It’s as if we are living in a culturally created movie that many of us are convinced is the only reality, because we can conceive of no other. Think of it as a kind of hypnosis. We have all been hypnotised from birth by the cultural conditioning of modern Western society.

So how do we snap out of this mental programming? How do we switch off the constant mental feedback loops and become aware of the greater reality once more? We will never see the world like a primitive Kalahari Bushman did, their brains were wired differently from the moment of birth, but using the simple exercises provided in this book you may at least get a taste of what an awareness of the greater reality feels like, and what it is like to experience a total immersion in nature and the world of spirit.

Rob Wildwood is a writer from Yorkshire who currently resides in Glastonbury, Somerset. He is also a photographer, researcher, shamanic practitioner, geomancer and world traveller specialising in the origins of spirituality, earth energies, sacred sites, and primitive and pagan beliefs. You can find more information about his travels, adventure and photography on his website.