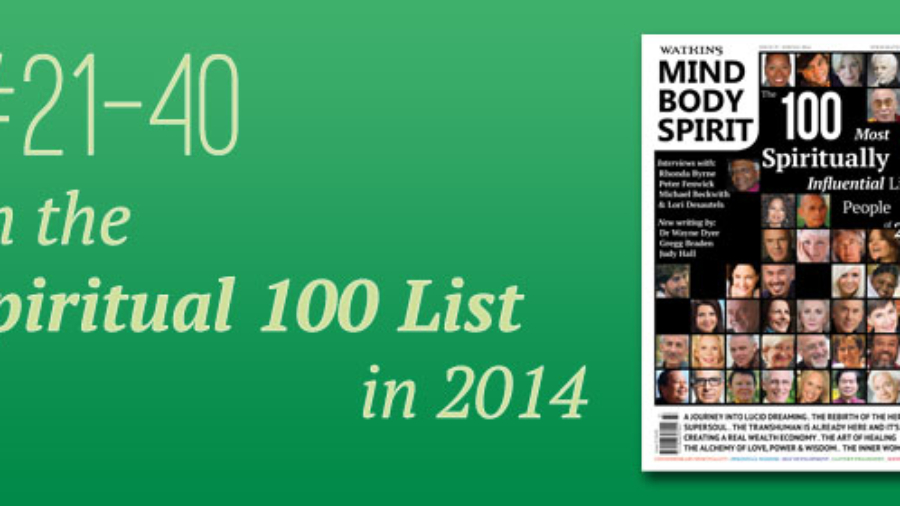 by watkinsbooks
with 3 comments
MagazineSpiritual 100

[dropcap]21[/dropcap] Amma
Born in Parayakadavu, Kerala, India / 27 September 1953 (Libra/Snake) / Spiritual Leader
Sri Mata Amritanandamayi Devi, or Amma (“Mother”), is a Hindu spiritual leader, often referred to as “The Hugging Saint”, and widely respected for her humanitarian activities. In 2013 she was awarded the first-ever Vishwaretna Puraskar (Gem of the World Award) by the Hindu Parliament (India) and a proclamation on behalf of the State of Michigan commemorating her 60th birthday, describing Amma as a true citizen of the world and recognizing her charitable works worldwide. www.amritapuri.org [dropcap]22[/dropcap] Alice Walker
Born in Eatonton, Georgia, USA / 9 February 1944 (Aquarian/Monkey) / Author, Poet, and Activist
Walker is best known for her 1982 novel The Color Purple, for which she won the Pulitzer Prize for Fiction. In 2013, she released two new books: The Cushion in the Road: Meditation and Wandering as the Whole World Awakens to Being in Harm’s Way and a book of poems entitled The World Will Follow Joy: Turning Madness into Flowers (New Poems). Alice Walker: Beauty in Truth, a documentary film about her life directed by Pratibha Parmar, premièred in March 2013 and was aired on the BBC in July. alicewalkersgarden.com [dropcap]23[/dropcap] Esther Hicks
Born in Coalville, Utah, USA / 5 March 1948 (Pisces/Rat) / Author and Speaker

Together with her husband Jerry who passed away in 2011, Hicks had amazing success promoting the Law of Attraction through books, DVDs and lecture tours. The Teachings of Abraham, the nonphysical entities that speak through her, took off with the release of Ask and It Is Given, the most successful of the partnership books. Her latest DVD Push the Launch Button! is featured on page 80, Watkins MBS #37. www.abraham-hicks.com

“God’s definition of what matters is pretty straightforward. He measures our lives by how we love.” – Francis Chan

[dropcap]24[/dropcap] Francis Chan
Born in Chinatown, San Francisco, USA / 31 August 1967 (Virgo/Goat) / Preacher and Author
Chan is the best-selling author of Crazy Love and Forgotten God. He is the founding pastor of Cornerstone Church in Simi Valley, California, and the founder of Eternity Bible College. He also sits on the board of directors of Children’s Hunger Fund and World Impact. www.francischan.org

“If you rely exclusively on the advice of others, you may make terrible mistakes. Your heart knows what you need. Other people have other agendas.” – Brian Weiss

A psychiatrist who lives and practices in Miami, Dr. Weiss is a graduate of Columbia University and Yale Medical School. While he hails from conventional medicine, his research focuses on reincarnation, past life regression, future-life progression and survival of the human soul after death. His books include Many Lives, Many Masters, Only Love is Real, and Miracles Happen. Having appeared on The Oprah Winfrey Show in 2008 talking about reincarnation, he was interviewed again by Oprah on the talk show Super Soul Sunday in June 2013. www.brianweiss.com [dropcap]26[/dropcap] Matthew Fox
Born in Madison, Wisconsin, USA / 21 December 1940 (Sagittarius/Dragon) / Priest and Theologian

Fox is an internationally acclaimed spiritual theologian, an Episcopal priest, and an activist who was a member of the Dominican Order for 34 years. An early and influential exponent of Creation Spirituality, Fox’s effort to reawaken the West to its own mystical tradition has included revivifying awareness of Hildegard of Bingen, Meister Eckhart, Thomas Aquinas and the Cosmic Christ tradition, as well as interacting with contemporary scientists who are also mystics.  His books include: Original Blessing, The Coming of the Cosmic Christ, and Christian Mystics. In 2013, he published Letters to Pope Francis: Rebuilding a Church with Justice and Compassion and with Adam Bucko Occupy Spirituality: A Radical Vision for a New Generation. www.matthewfox.org

“Someday you’re gonna look back on this moment of your life as such a sweet time of grieving. You’ll see that you were in mourning and your heart was broken, but your life was changing…” – Elizabeth Gilbert

[dropcap]27[/dropcap] Elizabeth Gilbert
Born in Waterbury, Connecticut, USA / 18 July 1969 (Cancer/Rooster) / Novelist and Memoir Writer
Gilbert is best known for her 2006 memoirs, Eat, Pray, Love: One Woman’s Search for Everything across Italy, India and Indonesia. Oprah Winfrey so enjoyed the book she devoted two episodes of her show to it. Gilbert followed this up with a sequel, Committed: A Skeptic makes Peace with Marriage, covering her life after Eat, Pray, Love. Her latest novel The Signature of All Things came out in hardback in October. www.elizabethgilbert.com [dropcap]28[/dropcap] Vadim Zeland
Born 1962/63 in Russia / Author
Zeland is a contemporary Russian mystic. Little is known about him other than that he used to be a quantum mechanics physicist and later a computer technologist. His writings emphasize positive thinking and listening to your intuition. He has published nine books in the Transurfing series, five of which have now been translated into English under the title Reality Transurfing. 78 Days Practical Transurfing, a manual based on his work, was published in September 2013. www.zelands.com [dropcap]29[/dropcap] Marianne Williamson
Born in Houston, Texas, USA / 8 July 1952 (Cancer/Dragon) / Author and Activist

Williamson is a ‘spiritual activist’, author and lecturer who founded The Peace Alliance and Project Angel Food. Her books include A Return to Love, A Woman’s Worth and The Age of Miracles. In October 2013, she announced her candidacy for election to the U.S. House of Representatives from California’s Congressional District 33 (www.marianneforcongress.com). Her latest book A Year of Miracles: Daily Devotions and Reflections was released in January (see page 6, Watkins MBS issue #37). www.marianne.com [dropcap]30[/dropcap] Graham Hancock
Born in Edinburgh, Scotland / 2 August 1950 (Leo/Tiger) / Author and Researcher

Hancock is the author of the major international bestsellers The Sign and The Seal, Fingerprints of the Gods, and Heaven’s Mirror. His books have sold more than five million copies worldwide and have been translated into 27 languages. In March 2013, TED decided to ban Hancock’s Whitechapel talk “The War on Consciousness”, but it can still be seen here on Youtube. His latest book War God, an epic novel of the Spanish conquest of Mexico, was published in hardback in May 2013. www.grahamhancock.com [dropcap]31[/dropcap] Steve Taylor
Born in Manchester, England / 30 April 1967 (Taurus/Goat) / Author and Lecturer

Steve Taylor PhD is a senior lecturer in psychology at Leeds Metropolitan University. He is the author of several best-selling books including The Fall, Waking from Sleep and Back to Sanity. He is also a poet and his latest book The Meaning is a collection of poetic and spiritual reflections. Eckhart Tolle has described his work as “an important contribution to the shift in consciousness happening at the moment on our planet.”www.stevenmtaylor.com [dropcap]32[/dropcap] Mantak Chia
Born in Bangkok, Thailand / 4 April 1944 (Aries/Monkey) / Healer, Writer and Teacher

Mantak Chia is a Taoist master who refers to himself as a teacher, “who helps his students empower themselves through cultivation of their chi energy”. His teachings reinterpret Taoist sexuality in a modern context. His latest book The Practice of Greater Kan and Li: Techniques for Creating the Immortal Self has just been published. mantakchia.com [dropcap]33[/dropcap] Karen Armstrong
Born in Wildmoor, Worcestershire, England / 14 November 1944 (Scorpio/Monkey) / Writer and Academic
A former Roman Catholic nun, Armstrong is the author of A History of God, The Great Transformation, and Twelve Steps to a Compassionate Life. In 2008 she called for the creation of a Charter for Compassion in the spirit of the Golden Rule. The charter was presented in Washington, D.C., in 2009. Signatories include Queen Noor of Jordan, the Dalai Lama, and Desmond Tutu. charterforcompassion.org [dropcap]34[/dropcap] Ken Wilber
Born in Oklahoma City, Oklahoma, USA / 31 January 1949 (Aquarius/Ox) / Author and Integral Theorist

Wilber has advocated Integral Thought and influenced figures as varied as Bill Clinton, Deepak Chopra, and Billy Corgan. He founded the Integral Institute and has written about adult development, developmental psychology, philosophy, worldcentrism, ecology, and stages of faith. His books include Sex, Ecology, Spirituality, The Eye of Spirit, A Brief History of Everything and A Theory of Everything. In July 2013, the CD version of The Future of Spirituality: Why It Must Be Integral was published. www.kenwilber.com and integrallife.com [dropcap]35[/dropcap] Peter Russell
Born in London, England / 7 May 1946 (Taurus/Dog) / Author and Futurist
Russell gained an honours degree in physics and experimental psychology at the University of Cambridge and a postgraduate degree in computer science. He studied meditation and Eastern philosophy in India and on his return conducted research into the neurophysiology of meditation at the University of Bristol. His principal interest is the deeper, spiritual significance of the times we are passing through. His books include The TM Technique, The Global Brain, Waking Up in Time, and From Science to God. www.peterrussell.com [dropcap]36[/dropcap] Z’ev ben Shimon Halevi
Born in London, England / 8 January 1933 (Capricorn/Monkey) / Author and Teacher

Halevi is the Hebrew name of Warren Kenton.  A founding member of the Kabbalah Society and a prolific writer on the Toledano tradition of Kabbalah, his influence is widespread – Sinead O’Connor and Prince Charles are among his advocates. His latest book A Kabbalistic View of History was published in 2013. www.kabbalahsociety.org [dropcap]37[/dropcap] Starhawk
Born in Saint Paul, Minnesota, USA / 17 June 1951 (Gemini/Rabbit) / Writer and activist
Born Miriam Simos, Starhawk is best known as an articulate pioneer in the revival of earth-based spirituality and Goddess religion. Also well-known as a global justice activist and organizer, she is the celebrated author of The Spiral Dance, long considered the essential text for the Neo-Pagan movement. A film of her 1993 novel The Fifth Sacred Thing is currently in production (www.fifthsacredthing.com). www.starhawk.org

“The notion that a human being should be constantly happy is a uniquely modern, uniquely American, uniquely destructive idea.” – Andrew Weil
[dropcap]38[/dropcap] Andrew Weil
Born in Philadelphia, USA / 8 June 1942 (Gemini/Horse) / Physician and author
Weil founded the Arizona Center for Integrative Medicine and has authored several best-selling books on integrative health and healthy aging. He often contributes articles to Time magazine, who named him one of the 100 most influential people in the world in 2005. His latest book, Spontaneous Happiness, was published in paperback in March 2013. www.drweil.com

[dropcap]39[/dropcap] James Redfield
Born in Birmingham, Alabama, USA / 19 March 1950 (Pisces/Tiger) / Writer
Redfield is best known for The Celestine Prophecy, which he self-published in 1992. He also produced and co-wrote the screenplay of the movie, which came out in 2006. His latest book, The Twelfth Insight, was published in paperback in 2012. www.celestinevision.com [dropcap]40[/dropcap] Iyanla Vanzant
Born in Brooklyn, New York, USA / 13 September 1953 (Virgo/Snake) / Lawyer, Minister, Talk Show Host and Author
An inspirational speaker, spiritual teacher, author, and television personality, Vanzant was named one of the 100 Most Influential Black Americans by Ebony magazine, which said that “Her books, lectures and television appearances have made her a multimedia high priestess of healthy relationships”. Her latest book Forgiveness: 21 Days to Forgive Everyone for Everything was published in December. iyanlavanzant.com