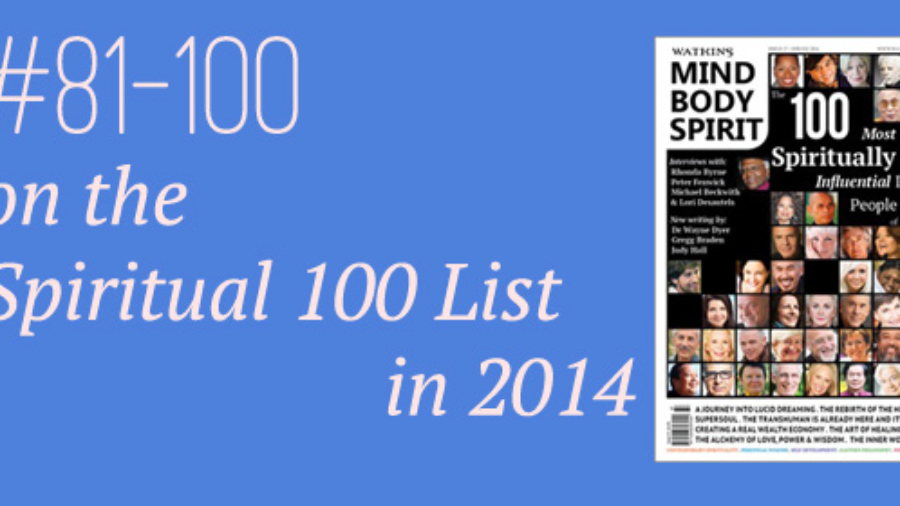 by Watkins Books
with 3 comments
MagazineSpiritual 100

Parkin is the author of the hugely popular ‘F**k It’ books, which include F**k It: The Ultimate Spiritual Way, F**k It Therapy, and The Way of F**k It. The son of Anglican preachers, he said F**k It to a top job in London to set up a retreat centre in Italy with his wife Gaia. He is a longstanding student of eastern philosophy, Qigong and shamanism and leads the world-famous ‘F**k It Retreats’ in Italy and the UK. www.thefuckitlife.com [dropcap]93[/dropcap]Jon Kabat-Zinn
Born in New York, USA/5 June 1944 (Gemini/Monkey)/Scientist, Writer, and Meditation Teacher
Kabat-Zinn is Professor of Medicine emeritus at the University of Massachusetts Medical School, w

here he was founding executive director of the Center for Mindfulness in Medicine, Health Care, and Society, and founder and former director of its world-renowned Stress Reduction Clinic. His books include Wherever You Go, There You Are and Coming to Our Senses. A revised and updated edition of his classic bestseller Full Catastrophe Living was published in September.www.umassmed.edu [dropcap]94[/dropcap]Sharon Kleinbaum
Born in USA in 1959 Rabbi and Activist
Sharon Kleinbaum has been Senior Rabbi of what has become the world’s largest gay and lesbian synagogue, Congregation Beit Simchat Torah in New York, since 1992. A leading social justice activist, she was named one of the “50 most influential rabbis in America” for six years by Newsweek, as well as one of their “150 Women Who Shake the World”. She was also named one of the “Top 10 Women Religious Leaders” by the Huffington Post. [dropcap]95[/dropcap]Marshall Rosenberg
Born in Canton, Ohio, USA/6 October 1934 (Libra/Dog)/Psychologist and Author
Marshall Rosenberg is a psychologist and the creator of Nonviolent Communication, a process to help people exchange the necessary information to resolve conflicts and differences peacefully. The founder and former Director of Educational Services for the Center for Nonviolent Communication, he is also the author of the bestselling Nonviolent Communication: A Language of Life and numerous other books. His latest title is Living Nonviolent Communication: Practical Tools to Connect and Communicate Skillfully in Every Situation. www.cnvc.org [dropcap]96[/dropcap]Huston Smith
Born in Suzhou, China / 31 May 1919 (Gemini/Goat) / Author and Professor of Religion
Smith is a religious studies scholar in the US. Holder of twelve honorary degrees, his books include The World’s Religions which has sold over 2½ million copies, and Why Religion Matters which won the Wilbur Award for the best book on religion published in 2001. In 1996 Bill Moyers devoted a 5-part PBS Special, The Wisdom of Faith with Huston Smith, to his life and work. In January 2013 in an open letter to Richard Dawkins, Sam Harris, and their fellow atheists, Smith wrote: “An increasing number of physicists are now beginning to say that the world looks more like a big thought than a big thing. Thought requires a thinker. Where does that leave you atheists?” www.hustonsmith.net [dropcap]97[/dropcap]Stanislav Grof
Born in Prague, Czechoslovakia/1 July 1931 (Cancer/Goat)/Psychologist and LSD Researcher
Grof is one of the founders of transpersonal psychology. His research into the use of non-ordinary states of consciousness has led to many insights into the human psyche. He has written over 20 books, including The Stormy Search for the Self, The Holotropic Mind, and LSD: Doorway to the Numinous. His latest book is Healing Our Deepest Wounds: The Holotropic Paradigm Shift. www.stanislavgrof.com [dropcap]98[/dropcap]Kathy Jones
Born in Gateshead, Co. Durham, England/21 April 1947 (Taurus/Pig)/Priestess, Author and Teacher
Kathy is a Priestess of Avalon and has played a key role in bringing back awareness of the Goddess into Glastonbury. She is the author of several Goddess books, including The Goddess in Glastonbury, The Ancient British Goddess: Her Myths, Legends and Sacred Sites, Spinning the Wheel of Ana: A Spiritual Quest to Find the British Primal Ancestors and Priestess of Avalon, Priestess of the Goddess: A Renewed Spiritual Path for the 21st Century. She is also a co-founder of the Glastonbury Goddess Temple and organiser of the Glastonbury Goddess Conference. kathyjones.co.uk [dropcap]99[/dropcap]B. K. S. Iyengar
Born in Bellur, Karnataka, India/14 December 1918 (Sagittarius/Horse)/Yoga Teacher and Author
B. K. S. Iyengar is considered one of the foremost yoga teachers in the world. The founder of Iyengar Yoga, he has written many books on yoga practice and philosophy. 2013 saw new editions of B.K.S. Iyengar Yoga: The Path to Holistic Health, Light on Pranayama: The Definitive Guide to the Art of Breathing, The Tree of Yoga: The Definitive Guide to Yoga in Everyday Life, and Core of the Yoga Sutras: The Definitive Guide to the Philosophy of Yoga. www.bksiyengar.com [dropcap]100[/dropcap]Sonia Choquette
Born in Denver, Colorado, USA/Author, Teacher and Healer
Choquette is a gifted psychic and intuitive who actively promotes the sixth sense. Her books have sold over a million copies and include Diary of a Psychic, Ask Your Guides, and the New York Times bestseller The Answer is Simple. Her new book Tune In: Let Your Intuition Guide You to Fulfilment and Flow was published in September, along with a new edition of Trust Your Vibes. www.soniachoquette.com