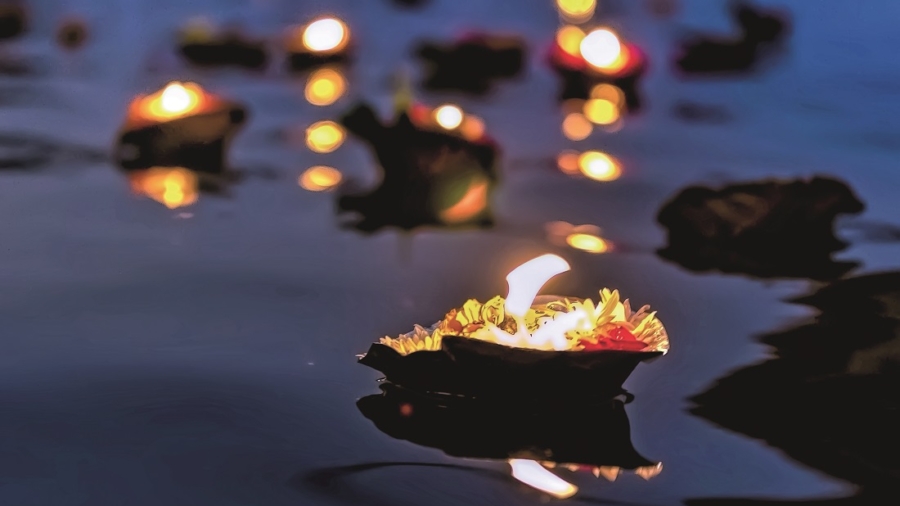 Although comparatively unknown in the West, Adi Shankara was one of the world’s greatest spiritual teachers. He was born in Kerala, South India about twelve hundred years ago and In the Light of the Self tells his story.

The book falls into two parts. The first is an account of Shankara’s early life and his apprenticeship with his spiritual master, told in a series of dramatic vignettes imagined from the very sparse historical evidence we have. As a precocious brahmin student of Vedic knowledge, he left home at the age of eight to wander through India in search of a guru. He eventually found the sage Govindacharya, on the banks of the holy Narmada river, stayed with him there and underwent the intense spiritual alchemy of discipleship. Shankara first appears as a teacher in his own right several years later in Varanasi, then as now a sacred centre of pilgrimage and priestly learning, and after some time teaching in the holy city, spends the rest of his life travelling the length and breadth of the country, teaching, establishing monasteries and setting up orders of ascetics. The tradition he founded continues to this day to be the bastion of Hindu orthodoxy and a living inspiration to millions.

The second, and much longer, part of the book serves as a practical reader in Shankara’s teaching. This is known as Advaita Vedanta, and is one of the earliest, and purest, celebrations of enlightened nondualism. I explore his message from various angles, in short, dramatic sections that are intended to bring alive what is normally considered to be dry philosophy only fit to gather dust on an unvisited library shelf.  Many assorted topics are discussed as they arise in these imagined episodes of his life and travels; the knowledge unfolds through dozens of question and answer sessions between Shankara and people who bring their everyday and spiritual problems to him.

The one teaching most commonly associated with Shankara’s advaita is the doctrine of maya which is usually understood to mean that the world is an illusion. As someone long involved in the field of Indian studies, I have always been curious that the bearer of such a bleak message should even today continue to enjoy a national esteem and affection that is inconceivable to the modern European. Indians generally like their saints to be human and down to earth, members of the extended family, so how did this world-renouncer remain so loved and respected? The answer, of course, is that Shankara did not baldly teach that the world is an illusion. As he wittily remarked, if the world is just an illusion, then both he himself and his teaching of the world-illusion would themselves be equally illusory! His blissful celebration of nonduality is far subtler and more life-affirming than such a bleak negation, as the episodes that comprise the second portion of the book make clear.

To put some living flesh on these disregarded bones, I went back to Shankara’s own words by researching his renowned commentaries on classic early Sanskrit scriptures – the Upanishads, Bhagavad Gita and Brahma Sutra – as well as some of his own poetic compositions. What I discovered was a practical psychology that tackles the perennial problem of human suffering head on. He addresses not only such perennial spiritual/philosophical concerns such as karma, reincarnation, free will and destiny, God and the world, but also topics that are immediately relevant to us today, such as the search for an enduring identity, the way to live authentically in a world that is constantly changing and where true happiness resides. The great advaitin is always clear and uncompromising in his analysis, employing a pragmatism that has led scholars to compare his method to that of the Buddha. Like his predecessor, Shankara emphasises that our life is the creation of our mind, and he emphasises the need of cultivating a radical discernment if we want to understand ourselves and the habitual self-contraction that is the cause of our suffering. He tirelessly points out how patterns of misunderstanding, consolation and repetition function, and how to move beyond their restrictions.

I have called Shankara’s teaching method the Yoga of Non-duality. Yoga not in its usual, partial meaning of a physical exercise routine, but in the true sense of the word: the ‘union’ of the limited individual mind with the cosmic intelligence, the joining of the human with the Divine. The journey of yoga culminates in the enlightened and permanent realisation of the one undivided and universal Consciousness, our conscious identity with the selfless Self of all. In the light of the Self we are one with the transcendental Being that is also manifesting as the ‘outside’ world; there is a state of unity or ‘non-duality’ between ourselves and everything we imagine to be ‘other’. This is not just some grandiose or sentimental theory, but a direct and living experience that is recorded by all the great seers and mystics over time, no matter what their religion or culture. Shankara’s writings are a pellucid celebration of this universality.

The concept of nondualism has become well known among spiritual seekers, particularly through the life and teachings of Ramana Maharshi, the sage of Arunachala, who left the body in 1950. Ramana had such respect for Shankara that he referred to him simply as ‘the Teacher’ – acharya – and translated some of his works from Sanskrit to his native Tamil. In recent years, many proponents of nondualism, mostly Western, have emerged. These ‘neo-Advaitins’ generally advocate a ‘no-path’ enlightenment that dispenses with all traditional methods, paths and sapiential lineages, offering in their place an instantaneous ‘awakening’ through the energetic transmission of satsang contact. Whatever its value, this is not the same nondual message of masters such as Shankara and Ramana. Both these adepts, and many others who sing the song of freedom, are very clear that the ‘no-path’ way of unmitigated, direct insight into reality, traditionally known as jnana yoga, is suitable only for a very few. In all but a handful of cases, sadhana – the preparatory practices of purification, meditation, service, moral discipline and scriptural study – is indispensable. True liberation is not just a glib psychological affair; one cannot walk in off the street and immediately ‘get it’. Those who do succeed in the ultimate quest owe their success to perseverance. So amidst the ‘awakenings’, opinions and interpretations swirling around the spiritual supermarket, a fresh look at established teachings may provide a salutary realism.

As people are increasingly aware, we are at a crucial point in our evolutionary history. So many of our conventional ways of doing things are running into cul-de-sacs and there is general confusion about the best future direction. What is being demanded in this shift in planetary awareness is a new understanding of who we are, and what our potential and purpose might be. The tired old religious forms, more or less corrupted and devoid of an authentic praxis of self-transcendence, will not help us much. We need an integral breakthrough to a new level of consciousness, which begins on the individual level and spreads to the collective. Such a shift has already begun and is manifesting in various ways. To help us make this transition, the teachings of enlightened sages such as Adi Shankara can serve as indispensable guides. Hence the book.

Alistair Shearer is a freelance scholar who has worked for London University (SOAS), the British Museum, the Royal Academy of Arts and the auction houses Christie’s and Sotheby’s. His books have been translated into the major European languages as well as Japanese and Hebrew, and his translation from Sanskrit of Patanjali’s Yoga Sutra has been continuously in print for almost forty years. A seasoned teacher of meditation in the tradition of Shankara, he is co-founder of an award-winning retreat hotel in Kerala.