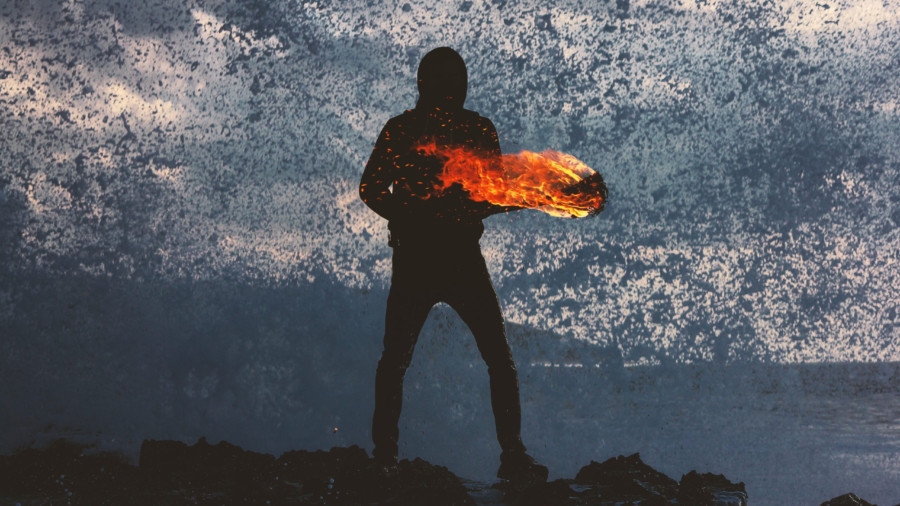 Do you ever look back and try to understand what brought you to where you are today? I have often done this, peering over my shoulder at the past in an attempt to make sense of the meandering course my life has taken over the years. Can I understand how one chapter unfolded and led me to the next? No, not really. But two things I do know.

One is that my career as a filmmaker has been an immeasurably rich and exciting one, sometimes filled with life-threatening danger and high adventure but more often than not brimming with opportunities that led me to an incredible range of people and unforgettable events.

The other thing that I know without the slightest hint of doubt is that many of the key moments that defined who I am were uncannily foretold by a half-blind, withered old albino shaman in a small house in the African bush almost six decades ago. It may sound like fantasy or science fiction but that shaman – a woman of the Bemba ethnic group in Zambia – saw far into my future,  predicting personalities, places and occurrences that even she herself did not fully comprehend.

Guided by her ancestors and interpreting the strange patterns that her collection of bones, stones, pebbles and trinkets had formed after she had cast them onto a grass mat on the floor of her tiny room her visions were amazing. Even though her physical sight was limited she was nevertheless peering far into a supernatural realm. Although she did not understand them she described what she saw. That long-ago day is the glue that binds episodes of my life together as I relate them in my memoir, Forever in my Veins.

The old woman accurately predicted my two marriages, how many children I would have and that I “would cross the big water to the north.” I did. I travelled by sea from Cape Town when I emigrated to North America. “There would be many big lights in my life,” she told me, and that I would “work with very famous people.” I did. I worked on the soundstages of Hollywood.

I would “one day go to a world where there is only white, no color, just white everywhere.” I did. I was a member of a scientific expedition on an ice-breaking research ship to Antarctica where frozen pack ice, horizon and sky blended together, making it seem as if we were within a gigantic translucent glass egg bristling with eternal whiteness.

She said I “must be careful of the great beast in the bush. It will try to kill you.” That happened. I was almost trampled to death by a stampeding elephant during a filming safari in Mozambique.

“Beware of the big water. It may take your life,” she said. That also occurred. On another scientific documentary production I was on a research ship that almost capsized in the South Atlantic.

“You will one day meet a man who was very close to the most evil man who ever lived.” It came true. I filmed an interview and spent an entire day with the man who was not only Adolf Hitler’s personal pilot but the closest of friends and confidant of the notorious leader of the Third Reich, a tyrant responsible for the mass murder of millions.

These were only a handful of the things she told me and when she made these predictions I had absolutely no idea what she was referring to. However, as my life played out one by one, event by event, all her pronunciations graphically came to pass. It was unbelievable.

Forever in my veins

I have to make a confession. I have been very fortunate and blessed. Although I was born and grew up in the racially divided society of South Africa in the midst of the apartheid era I was eventually able to move on, experience the collapse of colonialism and then explore the world at large, cross new horizons and develop a career centered on revealing the truth through the medium of documentary films.

Nearly sixty years behind the camera and encounters with extraordinary individuals in all walks of life –from science to religion to politics to the arts – have taught me that the world is infinitely more complex and amazing than we can ever imagine. Film was the means that allowed me to work in Hollywood, witness the ravaging effects of the Cold War in Africa, peer into the microscopic blueprints that shape the phyla of life on earth, dig for dinosaur bones, examine hominid fossils that give anthropologists an understanding of humanity’s distant past, make ethnographic films that delved deep into African tribal cultures, histories and spiritual practices. I worked with institutions and organizations such as the National Academy of Sciences, the National Geographic Society, NASA, the Monroe Institute in Virginia and even with the late Dr. Robert Jahn’s amazing Engineering Anomalies (PEAR) research unit at Princeton University.

As my career developed a plethora of projects came my way. I was involved in television series such as Mysteries of the Bible, Ancient Mysteries and Biography. I produced a retrospective documentary about the fabulous Voyager spacecraft mission to Jupiter, Saturn, Uranus and Neptune before the spindly craft left our solar system and set forth on a never-ending journey to the most distant stars.

Projects like that not only filled me with wonder but humbled me as I contemplated the awesome extent of the universe. But of all the topics that have truly captured my imagination and been the most compelling were those that told stories of people who had ‘NDEs’ or near death experiences for a show called Beyond Death. I have worked with people who claim to have encountered entities from other worlds, witnessed ghosts or who saw UAPs (unidentified aerial phenomena.) In 1966 I filmed what can only be described as an alien craft over Saskatchewan, Canada. I made documentaries featuring people such as Gordon Cooper – one of the original Mercury astronauts – and Neil Armstrong, the first human to walk on the surface of the moon.

Other undertakings probed the mysteries of consciousness and looked at spiritual concepts, metaphysics, mysticism and the paranormal. Those experiences have broadened my vision, enriched my life and given me insight into the many realms that exist beyond the physical and the normal. I felt it unfair to keep those extraordinary experiences to myself. Eventually I became compelled to share them with the world. And so – at first rather hesitantly for fear of sounding arrogant or boastful – I set them down in Forever in my Veins.

A return to the African shaman

The enigmatic mystery and power of African shamanism lie as central components within the book. When I was diagnosed with a life-threatening kidney disease thirty years ago I not only sought help from the most respected allopathic medical practitioners in Los Angeles, the city that I now call home, but I returned to Africa because that illness too was foretold by the old female shaman in her tiny dwelling in Central Africa all those decades ago.

She had predicted that I would get sick. Very sick. Even though I had no concept of what she was trying to tell me at the time she also said that when the illness came the only way I would find a cure for it and save my life would be to return to my roots, to go back to the continent on which I was born. And so, with the help of a number of extremely colorful and uniquely capable shamans – people who go by the traditional title of sangoma – I made many visits to South Africa to consult with them and to learn about the African paradigm of communicating with the ancestors. The results of those trips were astonishing. Even my nephrologist in Beverly Hills was amazed at how I managed to handle the illness and eventually go into complete remission. Many of the treatments I received – some so bizarre that it was difficult to describe – are discussed in the book.

My career and experiences have taught me that Shakespeare was right. As Hamlet says to his friend Horatio, “There are more things in heaven and earth than are dreamt of in your philosophy.” The world – indeed the universe at large – is infinitely more amazing than we can ever imagine. There is always cause for optimism. Light lies at the end of every dark and seemingly endless tunnel. There is always reason to remain insatiably curious and to continue searching, asking, finding out, revealing.

To paraphrase what I say in my book I think that in some way or another every single living entity – people, ponies, petunias – are all connected. We are united by an unseen grid. It is a tangled network that exists beyond the physical. It is a vast force field that binds us all. It transcends time and place. And I believe that it extends throughout the cosmos. What brought me to that conclusion is the primary reason I wrote Forever in my Veins. Within its pages I share that process of discovery.

Lionel Friedberg is an Emmy Award-winning film and TV producer and writer. Lionel grew up in South Africa and began his career at the first TV station in Central Africa in Northern Rhodesia, now Zambia, in 1961.

He worked as a Director of Photography on 18 feature films and wrote, produced and directed for National Geographic, PBS and national broadcast and cable networks including the Discovery Channel, A&E and The History Channel. He is also a New York Times bestselling author. He is based in Los Angeles, California.

Forever in My Veins: How Film Led Me To The Mysterious World Of The African Shaman by Lionel Friedberg, published by O-Books, paperback (432 pages) is available now from www.o-books.com and anywhere books are sold.