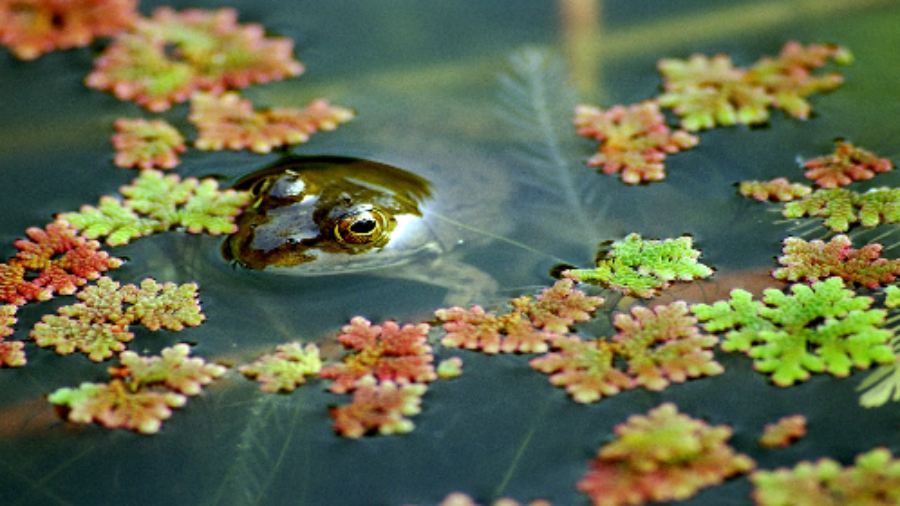 Wildlife communicator Tamarack Song shows how we too can open our minds and hearts to listen and communicate in the wordless language of wild animals and plants.

Many of us feel a deep yearning, but we don’t quite know what for. Something is missing from our lives—a lack of rapport that leaves us disconnected. We see the people around us, and the squirrels, birds, and butterflies, and they seem to be strangers. If we are a part of the same creation, why then do we not feel it? Why aren’t we spontaneously frolicking together; why aren’t we sharing our dreams and burdens?

The answer is, we are.

We have just lost conscious awareness of it, because we have lost touch with our nature. And then there is the other Nature: that place of beauty and mystery where we go for solace and inspiration. Here is our disconnect: we may know Nature, but do we know her as ourselves?

We came from Nature and to Nature we shall return when we die, yet something happened between those two events—our species left Nature and pursued a course that often ran in contradiction to her.

Now we miss her. We want to drink in the essence of life; we want to feel in our marrow what it’s like to be at-one with everything. We want to participate in the drama rather than observing it from the bleachers.

To do this, we have to dust off abilities that go far beyond mere intelligence. They will begin to manifest again only when we allow ourselves to be the animals we are. The reason we find it so hard to use these primal aptitudes, such as moving quiet as a shadow and communicating intuitively, is that we have not exercised them for so long that they have atrophied.

Don’t believe that you don’t possess these abilities. The truth is that our nature is Nature. Every cell and organ in our bodies has been honed over millennia to function best in the Natural Realm. Genetic memories are imprinted in our DNA—we know how to move and see and speak in the same way that a Robin knows how to build a nest and a Wolf knows how to howl.

Reconnecting with these innate skills is like learning to ride a bicycle. Do you remember how you wobbled all over the place and fell time and again when you were first learning to ride? The more you practiced, the better you were able to use your intrinsic sense of balance. Now no matter where you are or what is going on in your life, you can hop on a bike and take off without thinking about it. The same is true with our intuitive abilities: they will again become second nature to us, and we’ll begin to hear inner voices without even trying.

The Difference It Can Make

I’ve watched people who have struggled with chronic depression and danced with suicide find a reason to reengage and live—a reason that goes beyond words, beyond logic. Some of them call it a rebirthing experience; others describe it as a feeling of radiance. People around them can feel the vibrant life energy they project.

How We Lost Touch with Our Intuition

First, we reinvented ourselves as a rational species when we abandoned hunting and gathering for agriculture and industry. No longer needing to communicate intuitively with the animals and plants, our ability to do so went dormant.

Regimentation and linear learning finished the job. Nature’s way of spontaneous and ever-present relatedness with all that surrounds us has been largely replaced with an artificial world where nearly everything has to be quantifiable and defined with words.

This does not mean, though, that our intuitive communication skills are totally lost. Even when they go unrecognized, we continue to rely on them to some degree. Whether or not we give nonverbal cues credence, we regularly pick up on them. We gauge others’ emotional states before they ever speak a word, and we decide how to best broach a topic by impressions from facial expression, demeanor, posture, movement, and dress. Sometimes our cues are not directly related to sensory perception, such as when we feel that we are being watched or when we have a hunch about something.

Imagine a movie in which you play all the roles. You view the scene through each of the character’s eyes, rather than from outside. At the same time, what you think and feel is what each character thinks and feels. Even more than that, you experience each character is an integral part of yourself.

I knew this intuitive connection on a regular basis when I lived with a pack of Wolves. We related to the animal we were hunting as a functional part of ourselves, in much the same way that I am connected to my arm. It’s a deeply organic relationship that I can barely dance words around. I’m afraid that the best I can do is no better than me expecting you to know the depths of a stranger’s heart by handing you one of her socks.

Yet the depths of that stranger’s heart are not that distant. Even though I’m now using verbal language, you would only hear incoherent noise if it were not for the underpinning of intuition. A word is nothing in and of itself: it’s just a symbol for a memory or a feeling that we must connect with in order for the word to have life. I can say gwumpki, and if you haven’t had a meal of traditional Polish cabbage rolls, you might not have a clue as to what the term means. Still, you could likely pick up nonverbally some of what I wanted to communicate, thanks to intuition.

Where We Get Stuck

One reason we get mired down in words is that we have learned to equate them with communication. There is nothing intrinsically Human about word-based communication. It is a learned skill, which we acquire in the same way that a Dog learns to sit or shake hands. Behind every word is a learned association that gives it meaning. Even though it appears that people are communicating consciously via words, the actual communication process occurs intuitively.

With intuition, it is impossible to just talk to another creature, and it is not possible to just listen to what he says. Intuition is spontaneous, with listening and speaking occurring simultaneously and indistinguishably from each other.

How to Reawaken Our Intuitive-Communication Ability

The first prerequisite is to be rather than to think. We do this by setting aside our preconceived notions and agendas. In this way, we become open and empathetic.

When we do not, the creatures around us pick up on it and respond quickly. I remember one sunny day when I was wading through the shallows of a lake to catch Turtles by hand. For some reason, I got caught up in my head and tabulated how many Turtles I had already caught and how many more I could potentially catch. The Turtles then largely disappeared, because I was intuitively communicating my intent to them, even though it was not my intention.

Chronic fear is the greatest impediment to speaking intuitively. With our regulated, reward-and-punishment based world, we have created a fear-impregnated life that is alien to the realm in which the animals live. This is because fear constricts, and Nature is expansive. Animals are ever alert, and at the same time they remain relaxed and centered. This way, they can continually listen intuitively. It is their best survival strategy—and ours as well. It is perhaps the only way we can renew our relationship with all life.

Yet this is hardly just about animal communication. As our intuitive skills progress, our human relationships will likely become more functional and fulfilling than they had been. Rather than trying to maneuver through relationships riddled with control, rescuing, or enabling issues, we’ll be able to draw upon the deep understanding and empathy that is intrinsic to connecting intuitively.

Meet The Author: Tamarack Song lives in a national forest in Wisconsin, USA, where he runs the Teaching Drum Outdoor School and the Healing With Nature Center. He is a consultant for wilderness therapy programs, environmental restoration, and intentional communities. He works with trance, animal guides, and stress-trauma healing, along with conducting elite guardian-warrior and wilderness survival trainings. He has published a number of books on these topics.