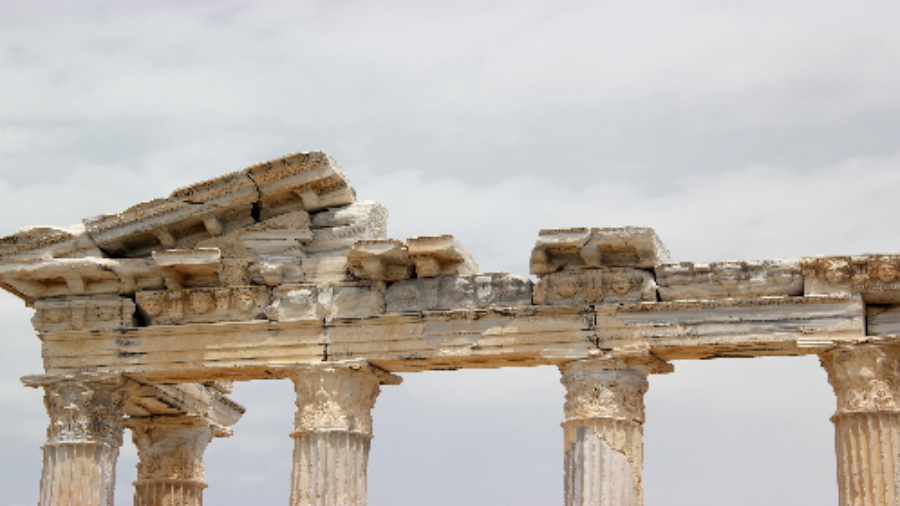 Teaching the secrets of life and death, the ancient Greek initiation rite known as the Eleusinian Mysteries was the most honored of all the Greek spiritual paths, one practiced for over 1,000 years and with timely wisdom for us today. These Mystery rites were at their height at a time of major cultural transformation that birthed drama, philosophy, empirical science, and democracy. Such revolutionary developments must have been as disorienting to the ancients as current changes are for us, and the lessons of their sacred story have many parallels to issues in the age in which we are living.

By the time of the Classical period in Athens, people came from all over the Mediterranean area to take part in a nine-day ritual where men and women, royalty, commoners, and slaves, participated together—a populist experience that was rare in that hierarchical, role-defined era. The Eleusinian promise was that initiates would become happy, prosperous, and relatively free of fear, and historians tell us that these outcomes were realized.

Demeter, a grain and mother goddess, comes to retrieve her pubescent daughter Kore, who has been picking flowers with her girlfriends, and finds her missing. She looks everywhere, beseeching everyone she meets to share with her anything they heard or saw, as would any distraught mother. Eventually, with the help of Hekete, the Goddess of the Crossroads, she discovers that her daughter’s absent father—the chief god Zeus—had told his brother Hades that he could marry Kore. Hades, Lord of the Underworld (where the dead reside), then abducted Kore and took her to his kingdom.

Demeter is outraged that Zeus would take this action without checking with her or considering Kore’s wishes, and beside herself with worry about what is happening to her young and innocent daughter. Although at first Demeter just despairs when Zeus remains unmoved by her entreaties, eventually she recognizes her unconscious complicity: By continuing to make the grain grow, she shores up Zeus’s reign. So, she withdraws her life force energy, and soon people start dying of hunger. Zeus relents when he realizes that without mortals, there would be no sacrifices to the gods, and the other gods might blame him and rebel.

Zeus sends Hermes, the God of Communication, to take Kore back to her mother. In the meantime, however, Kore has become the Queen of the Dead, grown fond of Hades, who presumably courted her, and taken the name Persephone. When Persephone returns to the Upperworld, she explains that she ate six pomegranate seeds in the Underworld. Although some say Hades forced her, anyone who was anyone in ancient Greece knew that if you ate food in the Underworld, you would have to return. For this reason, many therefore believe Persephone’s act was willingly chosen, creative, and radical, as she moved beyond the expectations of the times. Instead of living solely in her husband’s or her mother’s household, she goes back and forth. Half of each year, she and her mother co-create and maintain the Eleusinian Mysteries, initiating the living in the mysteries of life and death. During the other half, she initiates the dead into their new state and seems happy to be the wife of Hades.

Zeus celebrates this resolution by inviting all the gods and goddesses to a party, honoring the wisdom of Demeter and Persephone and what they had to teach about the seasons of natural and human life. Fall and winter are connected to times when we experience loss or suffering, like Demeter’s missing Persephone when she is in the Underworld. Spring and summer are related times of joy and celebration, such as Demeter feels when her daughter returns.

Relevance to Our Time: Some Examples and Their Lessons

Gender Partnership: When the Mysteries were at their height, the patriarchal takeover of gender partnership societies (in nearby Crete, for example) was still remembered. For instance, myths about Apollo unapologetically tell of his violent overthrow of the Temple at Delphi, erected in honor of Gaia, after which the wisdom of its oracular priestesses was translated for petitioners by priests. Demeter’s story relates how she rebelled against patriarchal rule, as women continue to do today and as evidenced by the recent presidential election. Her success in taking on Zeus, the chief masculine deity, was viewed not only as restoring the respect due women, but also as re-establishing gender partnership, and with it transforming the wasteland into verdant fecundity.

The Environment: The Mysteries taught that Demeter brought agriculture to humankind, showing how prosperity was fostered by human creativity and effort expended in partnership with the earth. When people forget to feel awe and reverence for the miraculous power of the earth that brings forth such abundance, famine ensues. This awareness is not unrelated to the contemporary roots of environmental devastation and climate change. Macho thinking promotes dominance over nature as well as over women.

Metaphysics: The worldview of the Mysteries emerges from the metaphor of agriculture: planting a seed; nurturing it so it grows, flowers, and bears fruit; and giving that fruit back to the earth when it dies so that a new seed can germinate and then sprout. So, too, in human sexuality, a seed is planted by a man in a woman and nurtured in her until a baby is born. The child is raised into adulthood, when it bears the fruit of its contributions to the world. It then grows old, dies, and is buried (planted) in the earth, after which it is reincarnated or resurrected. Similarly, creativity begins with the seed of an idea that comes from inspiration or the muses; it is nurtured and grows, until something new is born—eventually giving way to a newer insight. Thus, the cycle of insemination, birth, growth, death, and rebirth continues.

The nine-day Eleusinian initiation ritual ended with a priestess holding up a sheaf of barley to evoke the restoration of gender partnership, pouring a libation on the earth, and looking up into the sky, calling out “Rain, conceive,” clearly linking procreation and agricultural fertility while also celebrating the cosmic balance that is restored when the relationship between men and women is righted. To the initiates, everything had its season, and human life processes were woven into those of the natural order. Persephone’s annual movement between the Upperworld and the Underworld was viewed as proof of resurrection or reincarnation. Eating the pomegranate seeds symbolized consciously accepting death as a part of life.

Many people today see themselves as alienated from a lonely, impersonal universe, an inert Earth, other people, and even their country. No wonder they may be anxious, depressed, driven, or addicted. Yet, modern science provides us with awe-inspiring new discoveries. For example, we now know that we have stardust in our bodies, our planet is a self-regulating system, and great evolutionary leaps happen in response to increased complexity.

Imagine how different our lives would be if we trusted such new revelations, which, like the Eleusinian Mysteries of old, assure us that the processes of the universe are mirrored in our Earth and in ourselves. The knowledge that each of us matters and radically belongs could then seed happiness, feelings of abundance and gratitude, and greater courage to face the challenges of our time.

Meet The Author: Carol S. Pearson, Ph.D., D.Min., is a world-renowned expert on depth psychology and transformational leadership. She is the author of the Nautilus Gold Medal winning Persephone Rising: Awakening the Heroine Within, as well as timeless classic works including The Hero Within, Awakening the Heroes Within, and The Hero and the Outlaw.