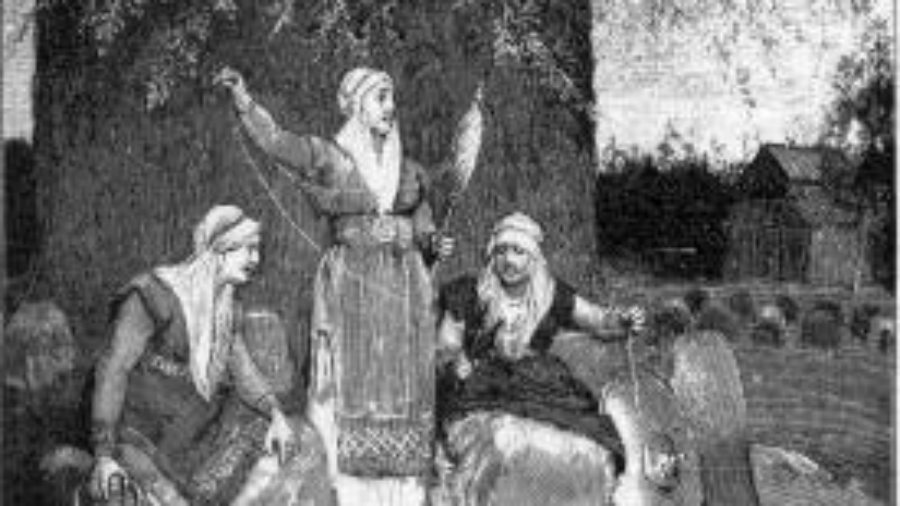 Jenny Chapman journeys beyond time and into the world of dreams to gain powerful insight about past, present and future.

The sensation was somewhat familiar. It was an eerie feeling of inhabiting a woman who does not belong to this century. In a moment, I had become short and humped over and was wearing a soiled apron. My face was heavily wrinkled. I experienced a sudden and overwhelming feeling of being an old lady, both in years on this earth and in the sense of being transported back in time.

All I had done was to rise from my leather sofa and walk towards the wooden kitchen door. Then, I was her and she was me. The feeling was so intense and the embodiment so total that I felt scared, and wondered if I would have to live in her body forever. With that passing thought, I was back in my own.

I felt sure the old woman had once lived within the four walls of my cottage, and that her feet had trodden the same flagstone floors I now stood upon. That day, she was merely going about her daily chores as if she still lived here. But was she friend or foe? She could be a disincarnate spirit who wished to express herself through influencing, obsessing on or possessing another human being. Someone who had left this world in a confused state – maybe because of trauma or an accident – and was unaware of her transition, unconscious of passing into another way of being. Or perhaps she was the type of spirit who could act as my guide or protector. An ally living in the other worlds.

Somehow, I had entered a mysterious web of re-experienced patterns woven from the past. But how could this be?

In mythology, the Norns – Urð, Verðandi and Skuld – or the Fates – Clotho, Lachesis and Atropos – represent the three aspects of time: past, present and future or ‘origins’, ‘becoming’ and ‘debt’. The great scientists and mystics tell us that there is no past, present or future and time is not linear and does not go in a straight line, but is cyclical and part of a process known as ‘dimensional circularity’. They explain that the past (unconscious, repressed memories from past lives) affects the present (flowering), and the future is just a probability. Some suggest we need to experience ‘time beyond time’, or be grounded in ‘what is’ to fully understand. Once immersed, each person experiences their own truth and can talk to their holistic self. They become part of an organised whole, which, like a gestalt, is perceived as more than the sum of its parts.

The old lady was the precursor to a dream sequence. In the first, several letters came through the stout door of the old farmhouse where I was born and raised as a child. Standing in the wide, low-ceilinged hallway I watched as a large white envelope came through the letterbox, along with several smaller brown ones. The second dream found me calling Kevin, my late partner, on the phone. I heard the ringing tone loud and clear, but the call went unanswered. He was living in a convalescence home and yet perfectly well in mind, body and spirit. On the third and final night, I was shown where professional bodies – for solicitors, writers, artists, social workers – kept their business cards. When used, the seemingly endless supply could enable a smooth and successful entry into their different worlds.

In dreams, envelopes are usually about feelings of anticipation or opportunity whilst the colour white indicates purity, peace, clarity and all things being exposed. As the first dream predicted, my physical world changed. Amongst other events, there was good news from a shaman and old travel companion, Apu Runa. He was now in a position to take his healing centre in Peru forward.  I had a vested interest and this project had been completely stuck, with building work barely started and the plot uninhabitable for nearly six years. Now, there was an email and Facebook trail inviting volunteers to apply, plus an interview on international radio. I was delighted.

The second dream was not so easy to untangle. It suggested a need to communicate with an aspect of myself, or a situation which required attention or needed to be called into being. I was confused. Did Kevin pass over completely when he left this realm? How did he connect? Did he use my energy to facilitate communication? ‘Oh yes,’ my friend Susie replied, ‘he’s definitely in the realm of love, or ‘frolicking on heavenly highways’, as he puts it. He is apologising about using your energy, but says that it is the only way he knows how to connect with you. He will change and learn to do it another way – somehow he has to shift his energy to make his presence felt in the dense Earthly realms.’ She turned to face me. ‘And you need to let him help solve your problems. To surrender and learn how to get out of your own way.’

After the third dream, it was as if I still inhabited that other world beyond my own. Yet, at the time, nothing tangible seemed to happen. The changes occurred later on, after I embarked on a shamanic journey. Once more, I entered into something seemingly solid and impermeable. As I turned to follow a path, my eyes focused on a high stone wall. It was built of Blue Lias stone, which is of a magnetic greyish-blue hue, and joined the old farmhouse, and my family home, with the pub next door. The wall stood sentry-like in a rather damp, dank corner of an otherwise cheerful garden. Then, as if by magic, I went straight through. The wall simply evaporated.

Likewise, Percival (‘he who pierces the veil’) in the Arthurian legends traversed a rickety bridge to find a castle wall. A secret wall previously unseen. He knocked to request entry and once inside, found himself part of a magnificent ceremony. Gradually he became immersed, and could view his world from the inside. With this he noticed important life-symbols – a bloodied lance, a heavenly sword and an old man with a wound to his groin – in the past, present or the future. It was as if he dwelt within a hologram. In those moments, Percival had the chance to redirect his will and become a leader. This was his birthright.

He needed to ask just one question: ‘What is wrong?’

Accessing different levels of consciousness is like entering the body of another: it can shape our fate. Such an opportunity presented itself during the COVID-19 pandemic lockdown, and the aptly named ‘boneyard’. This series of planetary conjunctions encouraged a grand, society-wide reassessment of our beliefs around death and the underworld. We came to terms with social distancing and seclusion inside our own four walls. Our dreams became more vivid and many of us gained psychic receptivity. The whole world was asked to reassess its illusions, and its confusions. Like Percival, this work allowed us to move from observer to participant in our lives.

And so it was for me.

The feeling was familiar and yet different. Kevin was visceral, alive and sat astride a handsome motorbike. As my fingers gripped around his waist, I noticed how fluid the movement of every muscle and sinew in his body appeared to be. It was as if I could get inside him – bones, blood vessels, liver, kidneys – but that was not the case. He was solid to the touch. The wind howled past as the speeding bike flew across the field to climb up a small incline. Behind us, a charging bull got ever-closer. A five-bar gate appeared. It closed off our exit route, and the angry bull was on our mudguard. Suddenly, my fear – a sour and rancid smell – surrounded us. Kevin’s head swivelled until his blue eyes met mine. Then ever so sweetly like Steve McQueen in the Great Escape, up and over we went and floated over the gate to land softly on the other side.