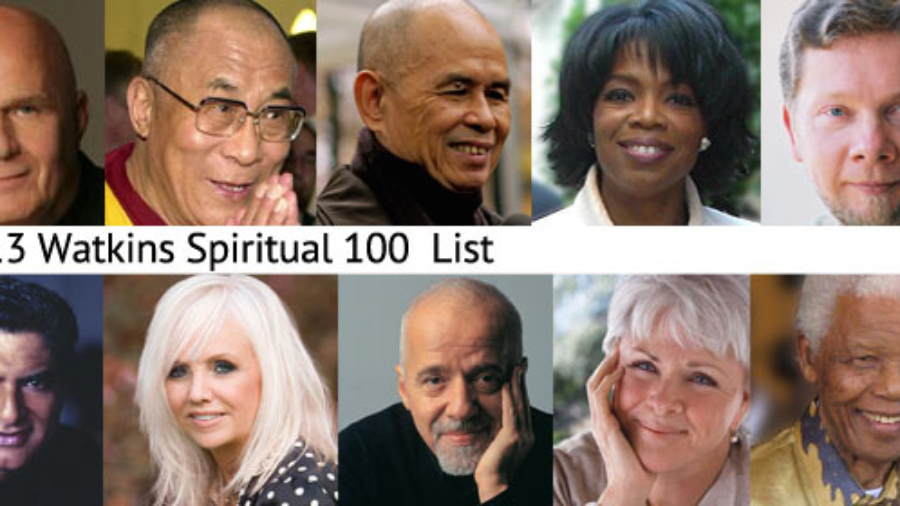 by watkinsbooks
with 49 comments
Spiritual 100Yoga and Meditation 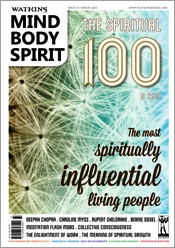 We are delighted to share with you our 2013 list of the 100 Most Spiritually Influential Living People.This marks the third year that we are publishing our 100 list. We’ve done our best to consider as many people as possible and our spiritual database includes the names of over six hundred candidates from which we selected the list of the top 100, highlighting the most proactive individuals – ranging from political and religious leaders to spiritual writers, filmmakers and visionary artists.

This list is meant to serve as a positive guide to some of the leading modern teachers that are alive today, and we hope that you are as inspired as we are by their impact. We hope it helps our readers discover new authors and inspirational ideas.

This year’s list is more global and diverse than ever before. The youngest person on the list is Jeff Foster (32 years old) and the oldest person is Kyozan Joshu Sasaki (105 years old). We are also sad to report that Stephen Covey who was on last year’s list, passed away in July, 2012. There are several factors that were taken into account when compiling the list. The main three criteria are:

By taking into account the amount of times that a person is googled, the list gains a highly democratic parameter. In a sense, being googled is a form of digital voting, and illustrates just how often someone is being sought out. Additionally, we were highly selective in creating this list and did our best to remove candidates who spread messages that were hateful or intolerant.

Ultimately, this list is meant to celebrate the positive influence of contemporary spiritual teachers.

Watkins’ Mind Body Spirit magazine publishes the 100 Most Spiritually Influential Living People list on an annual basis and we welcome your feedback and suggestions in the comments below.

*Watkins’ Mind Body Spirit magazine is now available from WHSmith high street stores in the UK, as well as in Canada, Australia and over 700 Barnes & Noble and WholeFoods tores  in the USA. You can also get a copy of the current issue (£4.95) or take out a subscription directly from Watkins Books.*

1- Dalai Lama. Born Lhamo Dondrub, Tenzin Gyatso is the 14th Dalai Lama. Tibetan Buddhists believe him to be a reincarnation of his predecessors and the Buddha of compassion. He is a vocal activist for Tibetan independence and has made an incredible contribution to global spirituality. He was awarded the Templeton Prize in 2012 and donated most of the prize money to the Save the Children fund in India. Time Magazine call him “The most influential person in the world”, while The Times commented “He draws crowds that no other spiritual leader or politician could hope to match…he seems to look at life in a different way to everyone else”. His latest books How to Be Compassionate: A Handbook for Creating Inner Peace and a Happier World and Towards The True Kinship Of Faiths: How the World’s Religions Can Come Together are now available in paperback.
www.dalailama.com ::  Born in Taktser, Tibet :: 06/07/1935 :: Spiritual Leader

2 – Thich Nhat Hanh. Thich Nhat Hanh is a Vietnamese Buddhist Zen Master, poet, scholar and peace activist. During the war in Vietnam, he worked tirelessly for reconciliation between North and South Vietnam and his courageous efforts moved Martin Luther King to nominate him for the Nobel Peace Prize in 1967. He founded the Order of Interbeing and the Unified Buddhist Church, along with monasteries and spiritual centres in Vietnam, the USA and France. He lives in Plum Village, his meditation centre in France, and travels widely, leading retreats on the art of mindful living. His latest book Fear: Essential Wisdom for Getting through the Storm was published in November.
www.plumvillage.org :: Born in Thua Thien, Vietnam :: 11/10/1926 :: Spiritual Leader

3 – Eckhart Tolle. Eckhart’s profound yet simple teachings have helped countless people throughout the world find inner peace and greater fulfillment in their lives. At the core of the teachings lies the transformation of consciousness, a spiritual awakening that he sees as the next step in human evolution. His books, The Power of Now and the highly acclaimed follow-up A New Earth are two of the best-selling Mind, Body, Spirit books in the world. Tolle’s free online “un-course”—video teachings offered as reminders to the true source of peace and freedom within yourself – provides free resources to work towards a deeper level of consciousness.
www.eckharttolle.com :: Born in Lünen, Germany :: 16/02/1948 :: Modern Teacher and Writer

4 – Deepak Chopra. As a writer on Ayurveda, mind-body medicine and spirituality, Chopra has had huge success with titles such as Ageless Body, Timeless Mind and The Seven Spiritual Laws of Success. His latest books are Super Brain: Unleashing the Explosive Power of Your Mind, co-written with neurologist Rudolph E. Tanzi, and God: A Story of Revelation. Also new in paperback Is God an Illusion: The Great Debate between Science and Spirituality, in which Chopra pits his views against leading physicist Leonard Mlodinow.
www.deepakchopra.com :: Born in New Delhi, India :: 22/10/1946 :: Physician, writer and public speaker

5 – Rhonda Byrne. Well known for The Secret book and DVD, Byrne advocates the belief that we can all transcend our suffering by not falling prey to negative thoughts. She has been listed among Time Magazine’s list of 100 people who shape the world, and has also produced television shows. Her latest book, The Magic, was published in March 2012.
www.thesecret.tv :: Born in Australia :: 12/03/1951 :: Writer and TV/Film producer

6 – Dr Wayne W Dyer. Affectionately called the “father of motivation” by his fans, Dyer is one of the most widely known and respected people in the field of self-empowerment. His childhood was spent in orphanages and foster homes, and he has overcome many obstacles to make his dreams come true. Today he spends much of his time showing others how to do the same. His latest book, Wishes Fulfilled: Mastering the Art of Manifesting, was published in February 2012.
www.drwaynedyer.com :: Born in Detroit, Michigan, USA :: 10/05/1940 :: Author and Speaker

7 – Paulo Coelho. The Alchemist is one of the top selling books in history, with over 65 million copies sold in 150 countries. Coelho has sold more than 150 million books in over 150 countries worldwide, and his works have been translated into 71 languages.His new book Manuscript Found in Accra is published in April.
paulocoelho.com :: Born in Rio de Janeiro, Brazil :: 24/08/1947 :: Novelist

8 – Oprah Winfrey. Oprah might just be the most influential person in the world. She has discovered and advocated many spiritually influential thinkers—from Obama to Eckhart Tolle. Her multi-award-winning talk show became the highest-rated program of its kind in history. She now hosts Oprah’s Lifeclass (a self-help show), Super Soul Sunday (a spirituality show), and Oprah’s Next Chapter (an interview show) on her TV channel OWN: Oprah Winfrey Network.
www.oprah.com :: Born in Kosciusko, Mississippi, USA :: 29/01/1954 :: Talk Show Host, actress, producer and philanthropist

9 – Nelson Mandela. Mandela was an anti-apartheid activist and served 27 years in prison. After his release from prison in 1990, he led his party towards a multi-racial democracy and served as President of South Africa from 1994 to 1999; he advocates compassion and reconciliation and won the Nobel Peace Prize in 1993. He is active in fighting AIDS and racism, and his autobiography, Long Walk to Freedom is still an inspirational best seller.
www.nelsonmandela.org :: Born in Transkei, South Africa :: 18/07/1918 :: Political Activist

10 – Byron Katie. Katie refers to her method of self-inquiry as ‘The Work’ and promotes the idea that we can liberate ourselves from suffering by not believing/listening to negative thoughts. Katie exemplifies her methods as she has overcome paranoia, suicidal thoughts and severe depression. In addition to her bestselling books, she teaches her methods at free public events, in prisons, hospitals, churches, corporations, shelters for survivors of domestic violence, universities and schools, at weekend intensives, and at her nine-day “School for The Work”.
www.thework.com :: Born in USA :: 06/12/1942 :: Author and Speaker