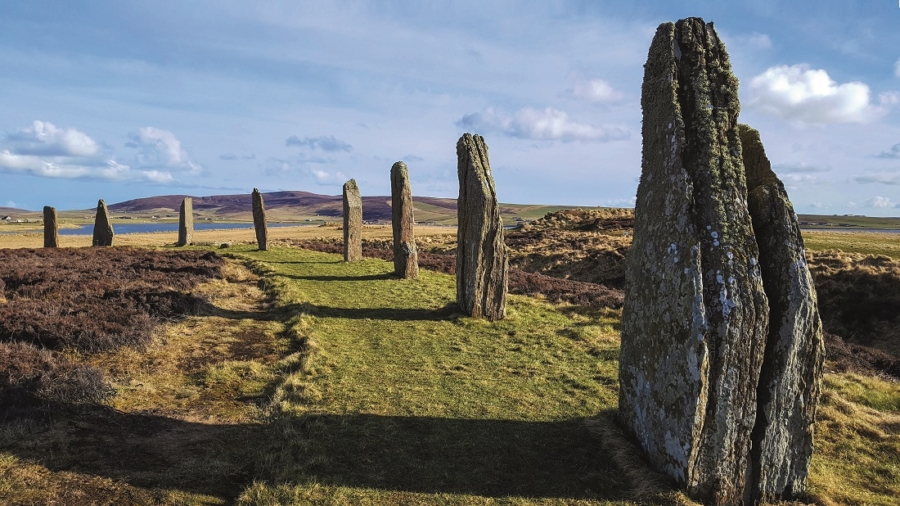 The Megalithic Portal is the world’s most-visited standing-stones website, a forum set up in 2001 to enable stones enthusiasts to document, discuss and help to protect our prehistoric heritage, much of which is under threat. With input from thousands of contributors from all over the world, Andy Burnham and his team have assembled an international resource of over 50,000 ancient sites and 180,000 images, serving half a billion web pages.

by Rune, Admin on the Megalithic Portal

In contemporary western society, people who report experiencing anything at all unusual at ancient sites or elsewhere are often derided, although other cultures have greater respect for “otherworldly” experiences. Much depends on your approach to a site. If you barge in looking for photo opportunities, you aren’t likely to have much in the way of spiritual experiences.

However, if you deliberately shift your consciousness by approaching a site as a sacred space, asking permission to enter and abiding by the answer, you are more likely to experience something special. Your intuition and perception will be heightened while your rational brain will be quieted, which is essential for any out-of-the-ordinary experience. Feeling ready for something unusual to happen doesn’t guarantee that it will, but if it does then you are more likely to experience it fully. Be respectful. According to several accounts, a certain site in Ireland will deter disrespectful visitors by making them slip, trip or fall.

When you walk into a stone circle, you may notice an immediate change in ambience. This might manifest as a feeling of pure peace or perhaps as a change in temperature. Maybe the wind that had seemed biting now loses its chill, although the stones are too low to provide physical shelter. Some people have found that each site seems to have a boundary or boundaries around it, which manifest as three rings or bands. At the Ring of Brodgar, for example, you can feel a change in atmosphere at each band (at the top of the ditch, at the bottom of the ditch and at the top of the inner bank).  You can dowse for the bands or simply try experiencing them.

One experience that really stands out for me took place at Duloe, an absolutely enchanting stone circle, with its blocks of white quartzite. I was suffering from a fair bit of pain in my hips as I walked or rather hobbled into the circle. I was near the centre, just taking in the atmosphere, when I heard three short sounds, one after the other. I have no idea what they were – certainly not traffic noise, nor any sound I could place. Immediately after, the pain disappeared and I was overjoyed to be able to walk normally and really enjoy my time in the circle.

If a place gives you the creeps, or you feel that it is “evil”, heed your instincts and go home. You are in the wrong frame of mind to connect with the site.

People report many different sensations from touching standing stones, ranging from pleasant tingles to electric shocks. They might identify warm spots, bands of different sensations, or even a pulse or a heartbeat in the stone. Some have been literally thrown off their feet through contact with a megalith, while others have experienced a flood of insight and knowledge akin to a sudden information download. Some people develop a real affinity with a site and are drawn to return to it again and again over the years. Of course, just because one person has had an experience, does not guarantee that anyone else can replicate it.

As a start, try leaning against a stone supporting yourself with just your head (be careful) or a hand. What happens?

by Kenneth Brophy, Senior Lecturer in Archaeology, University of Glasgow

1. The Calderstones, Liverpool: The monument was dismantled, moved and re-erected in a confused roadside arrangement in the 19th century, then moved again (twice) in the 1950s into a greenhouse, before going into storage in 2017 ahead of a grand re-erection beside Calderstones Mansion House.

2. Balfarg, Glenrothes, Fife: One of the largest henge monuments in Scotland and now, along with two standing stones and some cut-down telegraph poles, the reconstructed centrepiece of a 1980s housing estate.

3. The Stone of Mannan, Clackmannan: A huge standing stone with a smaller stone fixed on top located beside a tollbooth, moved there in 1833 from a more rural location in Lookabootye Brae; it looks like a huge penis.

4. Ravenswood Avenue standing stone, Edinburgh: A standing stone that as recently as 1903 was surrounded by fields and grazing cattle but is now trapped in a cage on the pavement in a 1930s housing estate.

5. Sandy Road, Perth: This kerbed cairn was excavated in the 1960s, removed ahead of housing development, then reconstructed in its original location in the form of a garden landscaped stone circle in a cul de sac.

6. Huly Hill, Newbridge, Edinburgh: A landscaped barrow with three satellite standing stones situated beside a service station and major motorway intersection, and beneath the flightpath of Edinburgh Airport.

7. King Arthur’s Round Table, Penrith: Henge monument near Penrith that was drawn fancifully by Stukeley and then converted into a tea garden by the owner of the neighbouring Crown Inn in the 19th century.

8. The Dagon Stone, Darvel, Ayrshire: A weird stone topped with a stone ball; it has been moved at least three times since prehistory, was once covered in paint by Ludovic Mann and now sits across from a Chinese takeaway.

bungaloid area of the village of Newport, overlooked by gardens and constantly monitored by men of a certain age mowing their lawns and washing their 4 × 4s.

10. The Cochno Stone, Clydebank: One of the largest rock art panels in Britain, painted in five colours by Ludovic Mann in 1937, then covered with dozens of scratched names like a huge stone visitor book, it was buried by the authorities in 1965 but never forgotten.

Andy Burnham is the founder and editor of the Megalithic Portal. He is a chartered engineer (MIET) and has designed electronic systems for some of the world’s top companies.