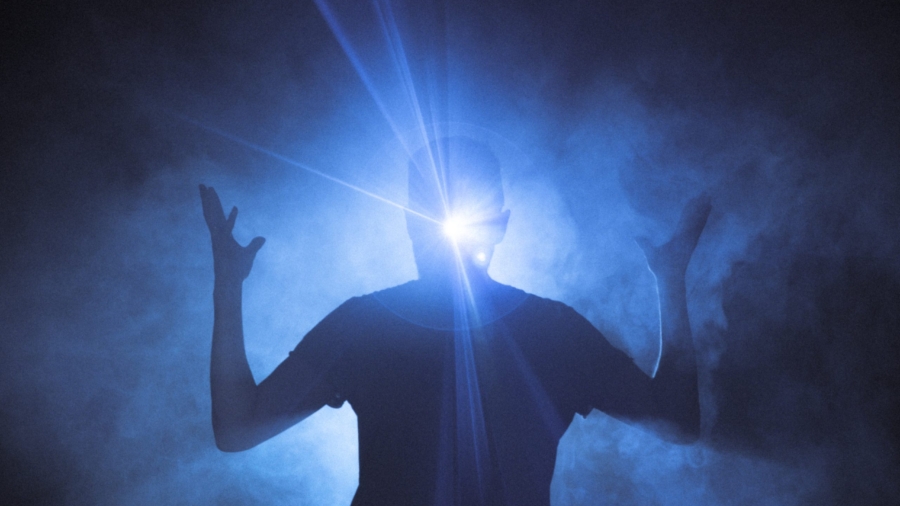 In 2006 David Ditchfield fell under a speeding train, journeyed to the Afterlife and returned with remarkable new gifts. Here, he talks to J S Jones.

At the end of the sell-out premiere performance of David Ditchfield’s moving symphony, ‘The Divine Light’, the packed Cambridgeshire concert hall audience rose to their feet to give him and the St Ives Chamber Orchestra a rousing standing ovation. Quite an achievement for a debut classical composer of a symphony inspired by visions of the Afterlife.

But even more remarkable when you consider the fact that David, an uneducated labourer who grew up in a working-class suburb of Birmingham, only acquired the ability to compose classical music after having a profound near-death experience following a horrific train accident in 2006 at Huntingdon railway station. As the surgeons fought to save him, he believes he journeyed to the Afterlife and was given specific gifts to bring back with him. The first was an ability to produce highly detailed images of what he had seen, paintings so vivid and real it was as though he had taken a HD camera with him across the Veil.

The second gift was an ability to compose classical symphonies, even though to this day, he cannot read or write musical notation.  David admits he still struggles to explain why he was given these gifts.  “I guess they are meant to show people that there really is something ‘out there’, we do survive death, all this miraculous stuff really does exist.”

Nothing in David’s past suggested he was destined to be a successful classical composer and fine artist.  He was the middle of three siblings and due to his undiagnosed severe dyslexia not being recognised at his large inner-city comprehensive school, “struggled to keep up with even basic reading and writing.”  By the time of his near-death experience, he admits himself, he was heading on a downward spiral in his life.   “I was drinking heavily, working as a manual labourer and I’d lost any sense of direction in my life.”

But that cold January day as he stood on the Huntingdon station platform seeing a friend onto the London-bound train, he had no idea his life was about to change forever.  As he leaned into the carriage to wave a last goodbye, his coat got caught in the closing door.  “I still remember the fear that ran through me when I realised the train was about to start moving and I was trapped.  I’ll never forget that moment as long as I live.  The engine started revving and then the train accelerated so quickly, I couldn’t run fast enough to keep up, so I got dragged underneath it. That was the most terrifying moment of my life.  I honestly thought I was going to die.”

Against all the odds, he survived and bleeding heavily from his injuries, found himself blue-lighted to Addenbrooke’s hospital where a team of surgeons were waiting for him.   It was there that he had his profound near-death experience.  “One minute I was lying in the emergency department surrounded by doctors, the next minute I opened my eyes and found myself floating in deep space surrounded by an infinite sea of stars, with loving Beings of Light stood either side of me and a wondrous tunnel of white light slowly revolving at my feet.  That was when I said to myself, ‘This is it. I’ve passed over. I must have died.’”

But he didn’t die and the next day, as soon as he woke up from the anaesthetic, he felt compelled to paint what he had just seen.  “I had to show people what the Afterlife looks like, so that everyone could see how beautiful it is.”  Janet, David’s younger sister, still recalls the moment he told her about his experience.  “It was the first night I visited him in hospital. He was so full of it, his near-death experience, so anxious to do the painting of it. I remember he was so weak he couldn’t even hold a pencil, so he even tried to get the nurses to help him draw. He was so determined to get some of the detail down on paper in case he forgot any of it.”

His desire to paint was just the beginning.  After leaving hospital, he then started composing classical music. This new-found gift was all the more intriguing as David (a former punk/pop guitarist) has never received any training in classical music and never composed such music before. “People always ask me how I do it, how someone like me can compose classical music.  I think my near-death experience opened me up to a higher Spiritual source.  That’s why I hear phrases of music in my head, I channel them from that place.  I know the difference between my own imagination and something channelled.  It feels different.  The phrase sounds more complete.”  But his gift didn’t come without its own problems.  “When I first started, I knew I was channelling classical music, but I had no idea what instruments played in an orchestra so I had to watch videos on YouTube to identify the sounds and range of each instrument.”

It worked and he soon composed his first symphony, The Divine Light even though had no way of writing it down. “I played each individual part on a synthesiser, one note at a time.  The synthesiser was plugged into a computer which had software on it that automatically converted what I was playing into orchestral sheet music.  That’s how I did it,” he explains, as we as we chat in his Cambridgeshire warehouse apartment where he lives, composes and paints.

David admits that he has had an inner struggle coming to terms with classical music’s apparent class divide.  “I went to a large comprehensive school in a working-class area.  So, when I started mixing with the classical musicians who were going to perform my music, I felt really out of my depth.  I had the wrong accent; the wrong clothes and I didn’t understand the ‘rules’ of how you are expected to behave in that type of social situation.  At first, I felt intimated but after a while, I realised the only difference between us was that they’d been exposed to classical music all their life and I hadn’t.”

The Divine Light symphony, inspired by his NDE, wasn’t a one-off fluke.  David has continued composing and his follow-up symphony ‘The Falcon’ was also premiered at a sell-out concert, as was his Cambridge Clarinet Choir commissioned piece ‘Awake’, conducted by renowned Clarinet player Andrew Webster.  He’s not stopping there either. He is currently working on a new symphony entitled “I Wasn’t Expecting This.’  “The title sums it all up, the whole life-changing journey,” he says, smiling.

He’s been busy painting too, producing over 40 paintings including a number of commissioned artworks, many of which depict in great detail what he believes he saw in that other world.  For David, his life now has a greater purpose.  “I came back from the Afterlife charged with an incredible energy, a burning desire to tell everyone there is nothing to fear after death.  Life continues on.  My life before had been completely ruled by guilt and lack of self-worth.  But I realised that those feelings didn’t belong to me anymore, and that gave me confidence to go out and try whatever I wanted to do in life and that’s a wonderful feeling. I want everyone to feel that way.”

David Ditchfield is a near-death experience (NDE)-inspired artist, composer, and author. He wants to use his NDE to make a positive difference to people’s lives.  David had a profound NDE in 2006 and when he woke up in hospital, he found he could paint dramatic paintings of what he had seen in the Afterlife, far beyond any artistic ability he had before. He could also compose classical music, having never received any training. His debut NDE-inspired symphony, The Divine Light, was premiered at a sell-out orchestral concert to a standing ovation. David lives, paints and composes in a converted riverside mill near Cambridge, UK.

Shine On: The Remarkable Story of How I Fell Under a Speeding Train, Journeyed to the Afterlife and the Astonishing Proof I Brought Back with Me by David Ditchfield, O Books