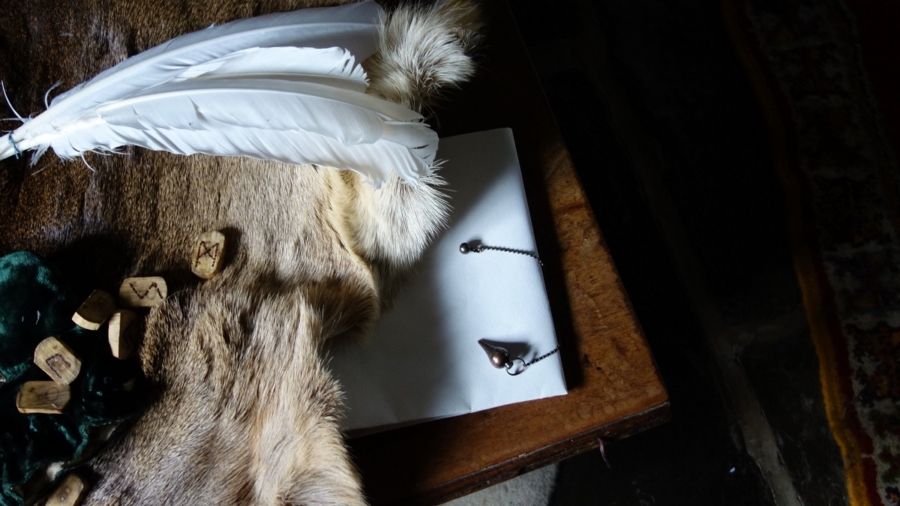 by Leah Russell
with no comment
Ancient wisdomHealth & Healing

Author and storyteller Jenny Chapman shares how the vision of a panda allowed her to step onto the journey of healing her mind and body.

An urn-shaped brass pendulum swung slowly. This time it was a circular action rather than the back and forth movement which had indicated a ‘no’ answer. As the pace increased, Tim and I looked at each other across the cluttered, skin-dressed table. ‘There’s a blockage in your crown chakra.’ An animal, bird or fish – each carries its own specific vibration or energy – had come to help, and then got stuck and stayed for longer than needed. The problem and the solution concerned concealment and a ‘greyness’ – blending in and not being seen. I was searching for something elusive that wanted to remain hidden. ‘Remember, fog and mist can be charged’, Tim told me conspiratorially.

Later, the sound of Tim’s gentle voice guided me to the background of rhythmic drumbeats. As I entered a shamanic trance or a receptive state where I could access sensory metaphors, I saw a reclining panda with a protruding belly. It was dressed in a tiara adorned with long veils, nets or gauze.

This animal means peace and gentle strength, but its shadow side involves trying to help too many people, doing too many things at once, being overly sensitive and becoming easily stressed. The panda has an unstoppable determination and can provide powerful support – that is, until it becomes overwhelmed and exhausted. It all sounded familiar. This panda had come in to help me, as a sick child, to gain acceptance and heal a trauma. Now it was no longer necessary and had become counterproductive. It needed to be removed.

What of the greyness, the blending in and hiding? I realised that the panda’s costume – its tiara and veils – represented a need for public recognition, a strong desire to obtain a wanted goal and to appear more attractive. It also came with a warning that something is wrong in the realms of the heart. The unravelling of that mystery started with a healing herd of horses.

Down on a Somerset farm, as twelve horses grazed contentedly, a gyspy horse named Logan suddenly lifted his head and stepped forward to work with me. His guardian looked at me with a quizzical expression, ‘He suffers with Cushing’s Disease, a condition caused by having too much of the hormone cortisol in his body. This may have a personal meaning for you.’ As it turned out, Logan embodied my physical problem.

This horse was a living example of the chronic stress which can cause ongoing issues like low immunity, infections and inflammation, whilst the tiara-clad panda represented the underlying cause of my repressions as being old fears, pain and supressed emotions. Beneath both was the driving force: a man-made substance, cortisone.

Cortisone had been injected into my spine as a child, and was now acting like an impersonal memory which was still broadcasting its image across my body. These injections had worked for me when I was sick but now affected the communication between my adrenal gland, pituitary gland and hypothalamus, causing me to produce cortisol when under stress. Like a wild animal randomly pressing buttons, this memory was disrupting the delicate negative feedback system that regulates my own internal production of hormones.

The antidote was more greyness, mist and concealment – trickery for the body and mind. This came in the form of a homeopathic remedy labelled Natrum Mur. It is a salt-based solution, as salt is a substance known to retain both fluids and old emotions – a remedy to help rebalance sublimation of grief and to stop the constant ‘looking back’ and hanging onto the past which was affecting my life in the present.

It came in a herbalist’s potion of Chinese skullcap, Reishi, milk vetch, nettle seed and Siberian ginseng, designed to boost my immune system, and in periwinkle, which is known to increase cerebral blood flow. My remedy also came through the gentle hands of a masseur experienced in unlocking the body’s responses to adrenal exhaustion and a reflexologist, who expertly poked and prodded my hands and feet to help my pituitary gland rebalance, lymph system flow, eustachian tubes and sinuses unblock and allow the adrenals to function again.

A process of dislodgement and flushing-out commenced. I started to drink lots of water and to undertake an in-depth interpretation of the symbols from the collective unconscious – like the panda – which access the part of us which transcends the transient world of the senses and is aware of universal symbols. These insights had a power. They unlocked a path to my personal consciousness and moved me instinctively towards different values. They allowed me to look again at what is important in life.

Over time, the shadow aspects of other animals presented themselves for extraction – a dolphin, whale and a pink, bloated, lifeless pig. Different archetypal energies came in to help – a giraffe sipping water along with porcupine, starling, warbler, kingfisher and thrush. They were joined by an ostrich (which helps to make meaning of our own and other’s lives, release what is no longer working and connect with divine intervention) and emu (which fights for justice and for what is right). The ostrich, which was dressed in a tutu, indicated composure and perfect balance. These new energies were mediated by grace (ice skaters), passion and compassion (the colours red and pink), a happy marriage (a peony flower) along with conscience, caring and connection (a grasshopper).

Shamanic journey work assisted me to become more present and less dissociated, and to immerse myself in whatever I did rather than always being in a hurry. The alternative therapies helped my bodily systems to reset, and with that, my energy and motivation levels increased. At last my psyche was talking to my endocrine system. Most importantly, it was producing oxytocin, the hormone of love and trust, the hormone of forgetting oneself, surrender or of being transported to another world. One day I relaxed as never before, just merging into the sofa with every sinew and fibre of my being at peace.

The small brass pendulum lay quietly on the table, yet the room itself seemed somehow alive. A smell of mugwort lingered and the claw of some long-dead animal, spread casually over the table, bumped at my shin. Tim spoke, ‘The basis of spirit medicine is to understand the issues behind the symptoms. This is the real story we need to access.’ He hesitated and looked across to read my expression, ‘A balanced crown chakra helps us to understand our life path and direction, the soul’s purpose or blueprint woven in at birth. What do our ancestors most want us to know and what needs to be sorted out in this lifetime? The answers to these crucial questions can lay over us like a fog or mist until activated or charged with new power.’ He continued conspiratorially: ‘This process was fated. It was in your Orlog, or the holistic part of the self. Now, your task is to be open to the spirit worlds and to truly understand the processes of magic.’