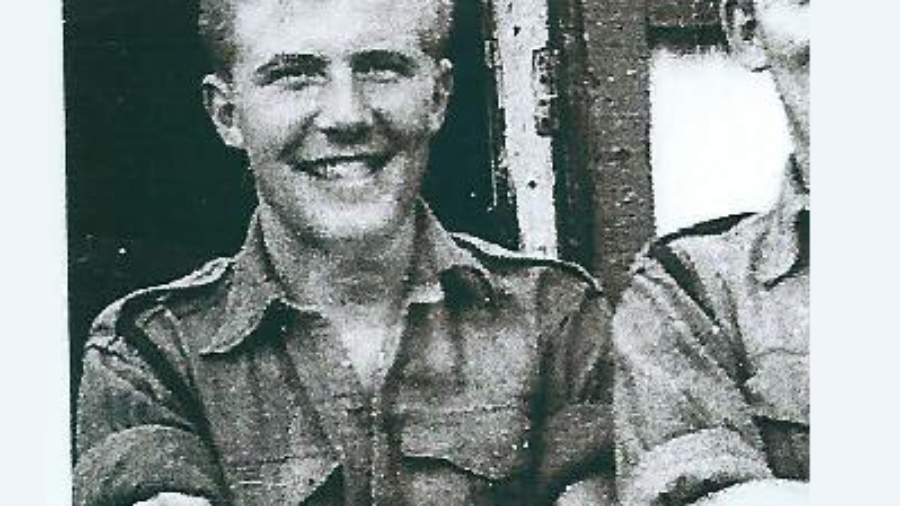 I was brought up in a Christian family environment. Dad rarely went to church, but would always mouth grace to himself before a meal and say his prayers before going to sleep. Mum was more religious: she went to church regularly, though not always to the same one. During the Occupation of Jersey my mother was in hospital, seriously ill. My father was told that there was no hope, and to remain with her through the night – the doctor did not think she would survive until the morning.

That night, Mum believed she did die. She recalled travelling through a tunnel of great light, where she came into a garden. There, she saw a beautiful woman dressed in a long blue gown who spoke to her: “Your time has not come. Go back and look after your family.” From that time on my mother’s health rapidly improved, and she later recalled this experience to me, convinced the vision she had seen was real. Even though she was not a Catholic, my mother knew it was the Virgin Mary who had spoken to her. After this experience Mum no longer feared death, knowing there would be another life waiting for her when her time came to meet the Lord.

During my life I have had several spiritual happenings of my own. The first occurred when I was aged 12 and, for some reason unknown to me, chose to walk out of the cinema I had been at with friends and cycle to the local outdoor bathing pool. The weather was cold, raining and blowing a gale, and there was no attendant around. I waited at the top of the granite steps which led to 10 feet of seawater, and must have wondered to myself what I was doing. After waiting for a few minutes, I heard a noise and saw a pram falling into the water. There was a baby inside. I dived in and pulled the baby out. The baby was blue, but I gently patted his back until he brought up some water, then started crying.

It turned out that the swimming instructor, who had her other son with her, was talking to the pool’s manager. It was her youngest child that I had just saved. She had left the pram at the top of the steps and a strong gust of wind had blown the pram down the steps into the water. That evening at dinner, Mum asked if I enjoyed the film I was supposed to be seeing with my friends. I recounted what had happened and my mother provided the explanation: “You were sent there to save that baby’s life.” In later years, seeing those lads growing up always brought the incident back to me.

Years later, when I was 21, I joined the Army. Being my parents’ only child I knew they would have preferred me to stay on Jersey, but I always found their loving presence around me whenever I went. When I was stationed at Mill Hill Barracks in London, a photographer came around the camp to take photos of the different working areas. I was on guard duty at the main gate. One photo come out with my mother’s face on my shirt. Although I did not notice this until year later, the image is most uncanny.

The following event I have no explanation for, except to put it down to a miracle. My father was waiting to go into hospital for a hernia operation. His stomach had swollen, he was in severe pain, and Mum had told me she would be very relieved when the operation was performed. I was living about two miles away from my parent’s home. My then-wife Angie and I were fast asleep, when at 2.15am we both heard the phone ring. On answering it, I heard a voice saying “Come quickly, your father is dying.” I told Angie what I had heard and drove to my parents’ house. The place was in darkness. As I walked through to the rear bedroom, the light was on and Mum was standing over Dad, trying to comfort him. He was writhing in agony. Mum turned to me: “Thank God you’re here, how did you know your dad was bad?”

There was no phone in their house. I woke the neighbors up and phoned for the doctor, who luckily did not live far away. I had never seen anyone in so much pain and I was in no doubt that my father was dying. When the doctor arrived, he managed to turn Dad’s stomach back into place with his hands. He confirmed that Dad was suffering from a strangulation of the stomach and that it had been “a very close call.” It was so emotional for us to see him return from the brink of death.

I do not know who rung. It was not my mother, as the nearest telephone was half a mile down the road and I doubt if she would have known how to use a phonebox. There is no doubt in my mind that it was spirit that made the phone call and gave me the message. Did I recognize the voice? No, but it was a male voice.

Though I have lost many people important to me in the course of my life, dying doesn’t worry me. In one way I am looking forward to it, because I know there is life after death. I just feel sorry for all those people who don’t realize we are just passing through this world into the next. We have a natural fear of the unknown, but I have been very fortunate with the experiences I have received in life, and the knowledge that there is nothing to be afraid of. I have relations and friends who have passed over but it never occurs to me they are really gone: they are simply in a different bit of time and space. I love them now as much as ever and I still think of them and the good memories we shared. I am looking forward to meeting my loved ones again. Who knows, perhaps there’ll be a party?