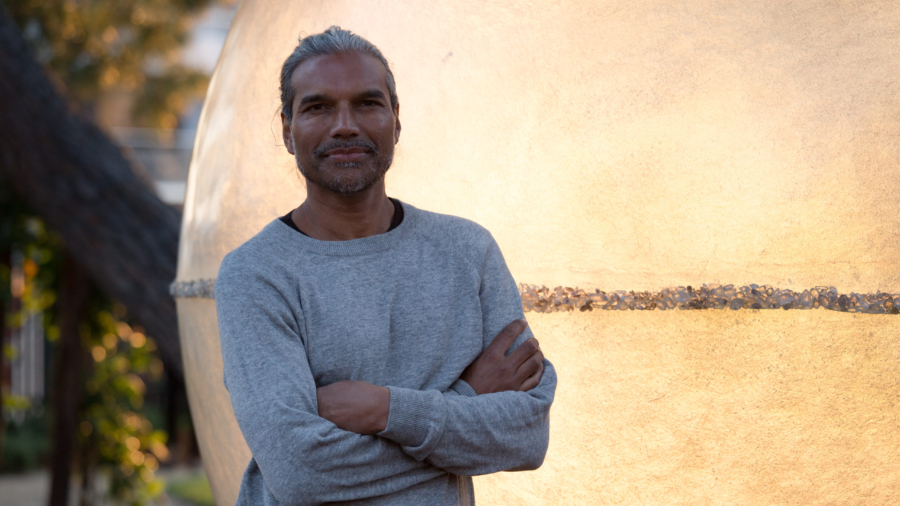 Clifton Mahangoe’s installations are often presented large-scale and in the middle of busy cityscapes – they present successions of intertwined images featuring natural phenomena such as waterfalls, close ups of water surfaces with their myriad of reflections and shadows or the sky full of stars and the infinitesimal combinations of abstract patterns and mysterious light effects that can be encountered.

The slow rhythm of his sequences can create a mesmerizing and soothing effect for the viewer. “You get the feeling that you’re part of something bigger”, Mahangoe says in his documentary, filmed in April 2020, while staring out over a beautiful sunset reflected on the gently undulating waters of his home town of Amsterdam. “My art is for people who might have forgotten to look at Nature”, he says in one of his short films.

Mahangoe’s most recent project, entitled Love & Light Thank You Healthcare, was a response to the 2020 COVID-19 lockdown in Amsterdam. On April 3rd, he sailed through the canals of Amsterdam with a special light-art installation. From the boat he projected an orange light in the form of the sun, over the historic buildings and into the living rooms of the people living there. Everyone could follow this, via a livestream. The work offered a moment of reflection, a moment “to pass on light to those who needed it”. Mahangoe intended for the installation to be a thank-you message for the incredible commitment that healthcare workers in Netherlands have made.

What was it like to grow up in a family of Hindu and Buddhist priests? Would you say it still has a significant influence on your art practice?

As a child I was surrounded by beautiful, colorful paintings and statues of Hindu gods. I loved to feel those stories with beautiful symbols and magical light in them. The stories the priests told were about different wisdom, all their perspectives and suitable for every phase of human life. Hinduism is a free religion. For me it is more of a philosophy than a religion. The wisdom passed down for thousands of years and reached my soul: until this day I feel it resonating in my daily life. From childhood on I have been attracted to the beautiful, colorful, symbolic images of the gods and goddesses.

The visual and magical stories were not only beautiful, but it was a way of living. As a child I was initiated to become a priest. Hinduism has thousands of gods and everyone is allowed to master philosophy. In every era there is a new avatar of the god Vishnu, the last avatar was the Buddha. So Buddhism originates from Hinduism. I have mastered the philosophy and a way of life. I feel partly Hindu, partly Buddhist. And in addition, during my meditation and training, I investigate my own truth. I research meditation techniques that suit me and the teaching of the Vedas is a life’s work in itself. On the one hand, I am down to earth, and on the other hand, I have a background of the beautiful Hindu culture with its knowledge and symbols.

The first thing when I wake up in the morning is perform my rituals. To start with, I do a light salutation mantra; as water flows over a Shiva lingam, I meditate with the elements. Then I do a breathing exercise and a Laksmi, the goddess of light, mantra. In addition, I honor the element of water and pour from a copper jug ​​into a crystal glass of water. I sometimes will pour this in direct sunlight, so that you can see the light of the sun reflecting through the crystals in the glass. I look at this and do a water mantra and drink the liquid light, as it were. Then I start my day, and at 1pm I do a light meditation.

At the end of the day, I do some mantras and a meditation to send light to those around me who need it at the time.

How did you come to make art? Can you remember the first artwork you made?

Previously, I was involved in creating experience concepts for companies, and as a highlight in 2002 I projected a sunrise in a nature reserve by a lake. Summer started at midnight! I designed a water screen 20x20m in dimensions, and at night a sunrise came on the screen, projecting animations of the sun. It was a goosebump moment for everyone. Since then I thought: “This is what I want to keep doing”, and the artist in me was born. Afterwards, it turned out that I had been making art for years but it was not yet clear to me. When I realized a few years later, tears filled my eyes and my body tingled. I knew that I had to make art in order to enrich the world. I see this projected sun project as my first work of art.

SPHERE 3D SPECTRUM, your recent installation in Venice, presents the beauty of reflections and ever-evolving patterns found in water. What feelings can you access when you meditate upon these?

In my work I play with light, sunlight, technical light and our inner light.

While making my work in special places I try to capture the golden hour, the hour is known by photographers as the perfect photo opportunity. The golden light of the sun reflecting through water caught with my camera is magical; golden colors, beautiful patterns and color prisms, hence the name, Sphere 3d Spectrum.

These repetitive patterns in the water often put me in a meditative state, a state of emptiness and silence. I’d like others to experience this by looking at my work.

Dutch conceptual artist Clifton Mahangoe (b.1973) creates light artworks with video and light installations. His installations explore natural phenomena, spirituality and nature. They often feature sequences of images flowing into each other: flowing water, reflections, shadow play or a sky full of stars. In recent years, his work has been shown at the Venice Biennale (2019), Light Art weekend Berlin (2018), Oceanic Global in Atzaro Ibiza (2017) and at Westergasfabriek in Amsterdam (2015 to 2018). Mahangoe lives in Amsterdam.

Alexander de Cadenet is an artist exploring spiritual and philosophical themes. His paintings, sculptures and photography have been presented at Courtauld Institute of Art, Victoria & Albert Museum, Museum of Modern Art Ostend, Tate Britain and Beijing National Museum. Inspired by a meeting with spiritual teacher Eckhart Tolle, he founded the Awakened Artists, a fellowship of artists exploring how art can evolve consciousness. He is Contributing Arts Editor for Watkins Magazine.