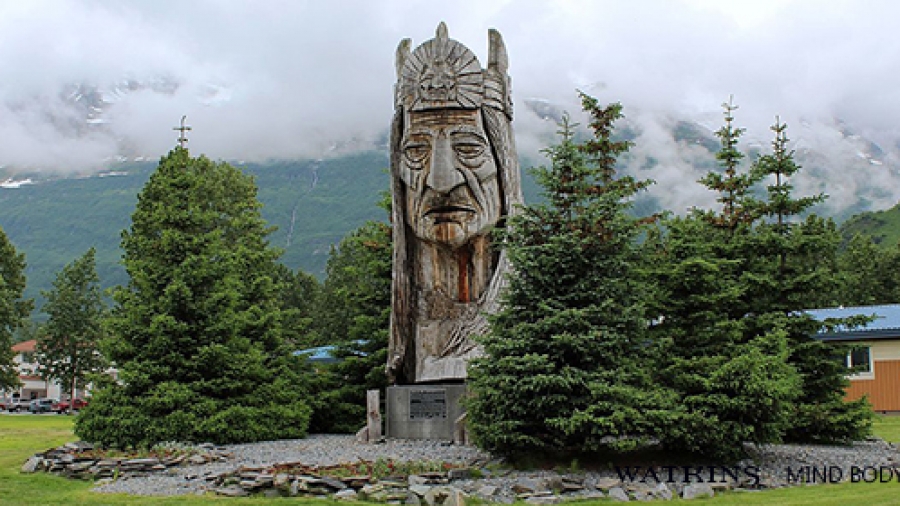 by Watkins Books
with no comment
Ancient wisdomYoga and Meditation

The next time you’re in the States (the northeastern part), try driving a patch of Route 1. America’s oldest highway started out as a series of small roads that eventually connected. Now it runs from the top of Maine all the way down to Key West, Florida. In between it’s Motorway and rural road; parts are dotted with traffic lights while others are long stretches where you can travel for miles and miles and not see another soul. In Edgewater, Florida, where US 1 meets Arthur Avenue, you’ll come upon a curious sight: a low, rambling house, the front, side and rear gardens crowded with carvings, many fashioned from hanks of driftwood gleaned from the beach only a mile or so east. Faces, bodies and patterns follow the shape of the wood.

What you’re experiencing (it is an experience—part of the museum backs up against a chicken coop) is the home, outdoor museum and studio of artist Peter Toth. Chances are, you’ll also experience the artist. He was hard at work on a new sculpture on the balmy January day we pulled in for a visit. Among the finished paintings and carvings, empty canvases and tangles of driftwood, an angel stood, a baby in her raised arms. Life-sized she is a prototype; the final piece will be upwards of 30 feet tall and will overlook the Amazon River when she’s installed sometime in the future.

Toth’s newest project is in its initial stages, but its wizened face rendered in his signature rough-cut style is instantly recognizable.  I’d seen it before when I encountered some of his other work in other states, his representations of the Native American Nations, The Whispering Giants.

Toth came to the United States as a refugee in 1956. The family settled in the Midwest, and after a stint at university and then working in a machine shop, he embarked on a “Great American Road Trip” in a van he kitted out for long distance travel called, “the Ghost Ship.” He headed south and then west, arriving in LaJolla early in 1972. There, in the cliff-side looking over the Pacific, he, “saw a haunting face.” Taking up a hammer and chisel—basic tools used by sculptors for millennia—he chipped away at the stone. Local papers called the sculpture the “scar faced Indian.” Toth didn’t consciously carve a Native American face but says that he had, “always felt that the Indians were victims of long abuse and injustice. Even as a boy in Europe I heard of these noble people.” That summer he returned to Ohio carved a second statue in his hometown of Akron where a viewer of the sculpture said that it had spoken to her. He vowed to sculpt a Native American statue in every state: “A trail of whispering giants across this country could speak to millions of people of the atrocities committed against the Indians.”

Unique representations of Native Americans followed as Toth moved across the country in the Ghost Ship. While scoping out possible sites for his statues in 1974, Toth met with Korczak Ziolowski, the sculptor of Crazy Horse who also worked beside Gutzon Borglum on Mount Rushmore. Korzak told Toth that his Florida monument “looked like Ben Black Elk,” Crazy Horse’s cousin, and his best friend. Korczak became a mentor, telling Toth, “Don’t let anyone tell you this style or that style is best. Be yourself, and you will succeed.” And so he did.

It took decades, but Toth was true to his word, carving some 74 statues all across the country, as well as some in Europe and Canada. Logs of native wood were provided by local communities, who also took care of Toth while he worked. Each locale became a hometown for Toth, and so he’s considered a local artist in every state; his sculptures are his gifts to the community. The Whispering Giants, his “humanitarian sculptures” is what he considers his most important work; the creation of the Giants was and is to, “honor the Indian,” and “all people facing injustice.” Toth was adopted by the Eastern Band of Cherokee, and the sculptures themselves were officially named “The Trail of the Whispering Giants” by the Arapaho Nation. A listing of all the Whispering Giants can be found online in the Smithsonian American Art Museum’s Art Inventories Catalog).

About the author: Natalie Zaman is the author of Color and Conjure (Llewellyn, September 2017), Magical Destinations of the Northeast and co-author of the Graven Images Oracle Deck (Galde Press). A regular contributor to various Llewellyn annual publications, she also writes the recurring feature “Wandering Witch” for Witches & Pagans Magazine. When not on the road, she’s busy chasing a flock of free range hens around her magical back-garden. Visit Natalie’s website here.