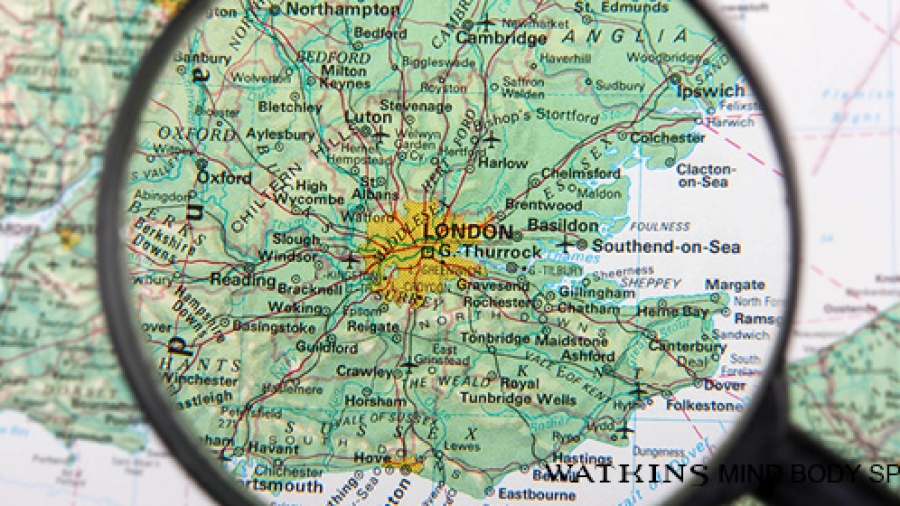 [dropcap]T[/dropcap]here are a large number of ley alignments through this area of London, several of them originally plotted by Alfred Watkins and listed in his book, The Old Straight Track. Watkins leys include The Strand Ley which you can easily find by standing on The Strand’s central reservation and walking towards The Aldwych until the spires of St. Mary le Strand and St. Clement Danes line up (mind the buses and manic cabs).
The St. Paul’s Ley, is close by but more on the south side of The Strand and taking in Temple Church and St. Bride’s. Woven around them is a major axis of the Earthstars pentagram. It comes in through Horsendon Hill at Greenford, The Shrine of Our Lady of Willesden (actually located in Harlesden), St. Dunstan in the West, St Bride’s Fleet St, The London Stone and Tower Hill.
On first inspection, there didn’t seem to be anything in the way of alignments directly through the Watkins shop. Then with a switch to maps of a different scale, they became apparent.
The main one is virtually North South and runs across the full width of the shop front. It looks very much like a Cardo Maximus, which Roman augurs called the main N-S axis of a geomantically laid out Roman Town. As the centre of Roman London was believed by some to be in the area of Charing Cross, at the southern end of this alignment, there may be more this idea than first thoughts would suggest.
At the Northern end of these Watkins’ Bookshop alignments, is St. Pancras Church on Euston Rd. It’s not an ancient site, but dowsers and sensitives will find it has terrific energy, especially when a lunchtime baroque concert has stirred it up. It also has some interesting and attractive architectural features. Along the Euston Rd side, stand four statues of the Caryatids, doubling as temple maidens and pillars. On the roof is no ordinary tower. According to Nigel Pennick it is modelled on the Temple of the 8 winds in Athens.
Other mark points along the way are: St. Giles, at the eastern end of Denmark St, which dates back nearly a thousand years before my favourite guitar shops nearby: St. Martin in the Fields (now Trafalgar Squ.) and a spot very close to the shrine of Edward at Westminster Abbey.
This N-S line is crossed at the shop by one running a few degrees off due East-West. It takes in many of the important sites in the Strand and Fleet St ( St. Mary le Strand, Temple Church and St Bride’s) and passes through St. Paul’s churchyard on its north side by the column of St. Paul’s Cross.
So etherically, Watkins is very well plugged in, to St. Paul’s and Westminster Abbey, the Temple Church, as well as its local power centre St Martins.

I have no doubt that someone may find other leys I haven’t spotted. Dowsers may all find something completely different.
Personally I am surprised to have found three viable alignments through the shop. One would have been enough.
For anyone wishing to check out the energies themselves, the N-S lines are more than the full width of the shop with the E-W line in the same area but at an almost 90 degree angle to them.

Where the lines cross is likely to be a tangible energy centre, which could be converted to Watkins’ Shop Cosmic Axis so it may even be a good idea to use the shop’s crystal displays to set up a mandala nearby as a focus of positive energy.

For more information see books section of www.earthstars.co.uk or the site’s list of places to visit.