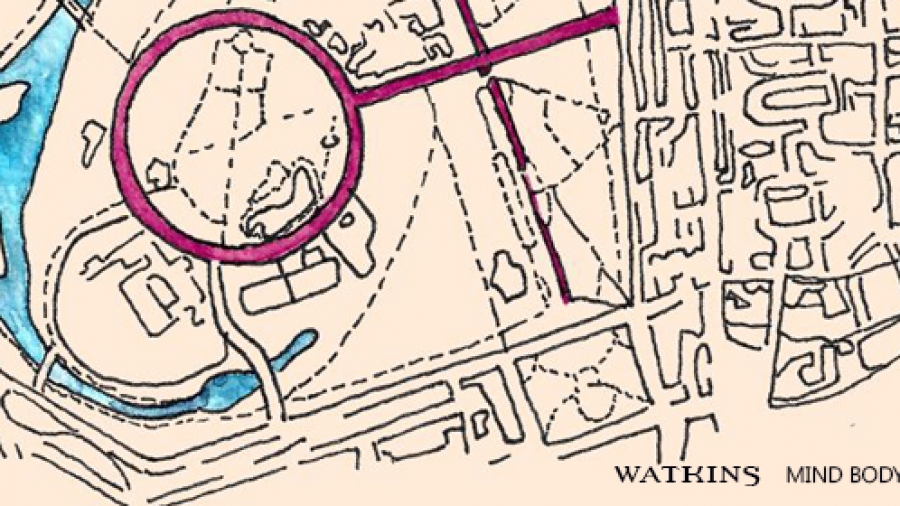 [dropcap]I[/dropcap]n mediaeval times the land which is now Regents Park was owned by St. Mary’s Abbey in Barking. Until it was redesigned by the architect and Freemason John Nash in 1811, Regents Park was called Marylebone Park. It stands within Marylebone, a borough whose very name declares its feminine loyalties. The origins of the name are interesting. The orthodox derivation is from the French ‘Marie Le Bon’ (Mary the good) or ‘Mary at the bourne’ (a river or stream). But another derivation is from the French ‘Marie Le Bonne’, or ‘Mary the nursemaid’; ‘bonne’ is a French word meaning nursemaid or children’s nurse. In the context of birth and generation suggested here, this derivation is especially appropriate. Interestingly, a subway called Nursemaid’s Tunnel runs beneath Marylebone Road, linking Park Crescent on one side with Regents Park on the other. Presumably it was built for the use of nannies bringing children and babies to the park for walks.

Compare the shape of the Boating Lake in Regents Park with that of the human uterus shown in Figure 1. This link is emphasised by the buildings of the Royal College of Obstetricians & Gynaecologists which stand immediately to the left of the lake. The small pond in the position of the left ‘ovary’ of the Boating Lake is appropriately named the Children’s Boating Pond.

Female symbols dominate the park layout. The popular and scientific logo for the female gender, which is also the astrological symbol for the planet Venus, is outlined by the pathways to the right of the lake (Figure 1).

The circular area enclosed by the pathway to the right of the lake is called ‘Queen Mary’s Rose Garden’. The Mary referred to here could be either a human or a celestial queen, but the Rose is a universal symbol of the Sacred Feminine: “As the flower of the feminine deities it is love, life, creation, fertility, beauty … it also symbolises silence and secrecy … the Rose Garden is a paradise symbol, the place of the mystic marriage” (JC Cooper: An Illustrated Encyclopedia Of Traditional Symbols, p141-142). One of Virgin Mary’s titles is ‘Rose Of Heaven’, and the well-known latin phrase ‘sub rosa’, or ‘beneath the rose’, means secret or hidden.

The representation of the womb in the form of a lake is no surprise. Water is also a universal symbol of the feminine and the unconscious; both Mary and Venus have mystical connections with water and the sea. Another of the Virgin’s titles in Catholicism is ‘Stella Maris’ or ‘Star Of The Sea’. In the latinate European languages, even the word for ‘sea’ is a version of her name – mare, mer, mar. She is the protector of sailors and her colour is blue. Around the Mediterranean there is a rich tradition of religious festivals in which statues of The Lady are carried in procession through the streets of coastal towns down to the seashore and into the water, with prayers for all those who travel the sea.

To the north of the lake, two pentacles or 5-pointed stars are outlined by sets of pathways. The first or lower pentacle has now lost one of its lower points, but on a map of the park in the 1930s (Figure 1, bottom map), it is complete. The 5-pointed star is also a traditional symbol of the goddess, usually Venus. This is rooted in the fact that over an 8 year cycle, the rising points of the planet Venus at midsummer mark out a perfect 5-pointed star around the horizon. The numbers 5 and 8 are therefore sacred to the goddess Venus.

The upper pentacle is situated overlooking the main park, on Primrose Hill. This location was used by the Masonic architect John Nash as a survey point when laying out the ground plan of Regents Park. The primrose, like the rose itself, is a 5 – petalled flower resembling a pentacle.

Neither this pentacle nor the Royal College of Obstetrics and Gynaecology were present when Nash planned out Regents Park in 1811, an indication that these forms and patterns continue to emerge and constellate over time, by some still mysterious process.

As a final touch, in 1849 the Park became the home of Bedford College, the first university college solely for women. The buildings, still contained within the park, are now the site of Regents College.