Cart is empty
by Watkins Books
with no comment
Consciousness studiesMagazine

[dropcap]M[/dropcap]y job as a physicist is to tell you a story about what is going on in the universe. 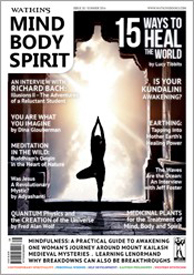 We humans have been worried about what has been going on “out there” for a long time. If we go back in time to when we first starting seeing things like stars and sunrises and we first started walking out of our caves, some of us got pounced on and some did not. We must have started wondering what we could do to affect our uncertain reality, specifically our material reality. How we could affect that “out there stuff’, and how could we get enough of it “in here” to eat, to breathe, to protect ourselves and so on? So in eons of time we created science out of our mystical (and fearful) understanding of such things like the sun rising and setting, watching the stars, and protecting ourselves from getting pounced on.

It certainly was magical, but we could not control all that we experienced. Mystery and wonder still are present in spite of our sophisticated sciences. Perhaps God still plays with us all. Nevertheless, throughout past time we thought about things we could control, and by figuring these things out, eventually classical physics evolved including mathematics, which is simply counting things to see where everything is. Basically locating everything was based upon what was tangible, and still today we figure effects out based on counting things that are separate and tangible. The things that we can touch have always made the most sense literally and figuratively. It is hard to count things that are not tangible. You can’t touch the wind, so can you count on it?

From that shaky beginning until this day, we are still inquiring deeply into such questions: What are things made of? What is matter? What are we ultimately made of? And gradually answers began to emerge.

We humans are very clever. We are good at taking things apart to see what they are made of. Today we are especially good at dividing atoms and even subatomic particles, etc. In spite of this, we have come to the conclusion that we really do not know in any tangible sense what we are looking at. In fact looking at these tiny things is kind of like being a huge giant asked to tea by microscopic elves and since the elves are so tiny, every time you try to enter the elves’ house, you break it all to pieces; so you will never be able to even see an actual elf, much less get inside an elf-house for a cup of tea.

In a similar manner, every time we look at these microscopic and submicroscopic particles, we realize that we can’t grab hold of them—all we find is what they seemingly register on sensitive instruments like seeing footprints in the wet sand but not the feet that we believe made them. So we try to figure out what we can grab hold of, but here is the grabber; it turns out to be really a special kind of nothing. We can only mentally grab hold of this nothing that we call the vacuum state and we learn how to do that pretty well at least theoretically well; that theory we call quantum field theory. In our minds, there are several kinds of these quantum fields that make up nothing. Some of us believe these quantum fields are real things, even if we can’t grab hold of them like we grab a fork or knife at dinnertime. They are certainly not tangible or material, but being clever we can make mathematical models and predictions about how they might behave and affect the forks, knives, and all of the other things we can grab in our universe.

When we make predictions of events based on the models of the mathematics of these “nothing” quantum fields; we calculate probabilities of something happening and we have learned how to picture these probabilities. These pictures enable us to predict what we can materially grab hold of. We are able to invent new materials like polycarbonate, make new inventions like quantum computers and lasers, and even learn how the physical brain works, how to strengthen our bodies, and how medicine works to heal disease. We begin to see, with these new pictures of nothing that we can make predictions that can be objectively or experimentally verified. Profoundly having this knowledge satisfies our need to control things, even though, ultimately, what we’re trying to control is fundamentally indeterminate, uncertain, and uncontrollable because it is not a thing in the first place. So, we know we can predict the possibilities of how tangible things affected by these special nothing fields change, but paradoxically not precisely how the actual things change.

But indeed a lot of change has occurred especially in the last 100 years or so enabling us to tell a rather remarkable story of the nothing-filled universe. Genesis states that “God said let there be light and there was light”. Anytime you see in the Bible the word light mentioned twice you need to scratch your head because why use the same word “light” twice? Was the Bible’s author talking about two different kinds of light? If so we see a spiritual insight into this physical phenomenon that we are grasping.

So let me restate this story. In the beginning the nothing-filled universe fundamentally had no energy, but was unsteady. It seems that nothing is unstable. In terms of Genesis, we can imagine that God’s Mind was engaged in wild thinking. So, the universe in the Mind of God fell off its moorings into a negative energy state, and in result, these “nothing” quantum fields generated particles from these two kinds of light, and those particles eventually became us, our bodies, and the big universe—mind you, all in the Mind of God.

Half-spinning light also allows both mind and matter to arise. Half-spinning light, like the electromagnetic (full-spinning) form of light that we see, can only move at the speed of light and as a consequence it doesn’t experience moving through space or time—both space and time simply stop for anything moving at light speed. However it can zigzag back and forth in space and time when it bumps into the Higgs field; so in essence it can stand still going nowhere or appear to move slower or faster than light. Zig-zagging in space it shows up as matter moving slower than lightspeed having inertia.  Zig-zagging in time it shows up as mind moving faster than lightspeed with no inertia.

So ultimately, the Mind of God is bouncing half-spinning light around to create matter. Very funny trick; it is a great magical trick, but that is not all. God or Nature if you prefer, also, wants to keep track of where everything is going, so something else is going on as well. Not only can this half-spinning light zigzag in space go forward in time, it can interact with full-spinning (ordinary) light thus allowing communication between particles of matter (called quantum electrodynamics). Since it can also go back in time (time-looping so to speak) because when you are traveling at the speed of light there is no time; time stops. So, when it is moving backwards in time faster than light, we have a kind of memory appearing and the appearance of order. We see that order as an historic record. Perhaps this is how God/Nature is doing it. It is pretty mind boggling that not only is this whole process going on in the whole universe; it is also going on within you. Hence your consciousness/mind is basically light talking to light by having the zigzagging half-spinning light shine electromagnetic full-spinning light as a medium that is also the message.

Let me summarize. Everything is made of something called half-spinning zigzagging light that communicates using non-zigzagging full-spinning light. So this is how the story goes. We are made of light and light relating to light is our conscious experience. Your awareness of what is going on or thinking involves remembering events as the past and predicting events as the future. We experience a spectrum of time because in order to move further into the future, you need to delve farther into the past to make sense of your experiences. This spectrum of time evolves like the universe, and this evolution is how time and space get created. So we and the universe are made from time-loops and space-twists and all of it is in the Mind of God, including you.

Meet the author: Fred Alan Wolf, PhD, aka Dr. Quantum, works as a physicist, writer, and lecturer. His work in quantum physics and consciousness is well known through his popular and scientific writing. He is the author of fourteen books, including Taking the Quantum Leap, which was the recipient of the prestigious National Book Award for Science. Dr. Wolf also appears in a number of movies, including What the Bleep do We Know?, a full length feature film staring Oscar winner Marlee Matlin, and the follow-up film Down the Rabbit Hole, as well as the now famous DVD The Secret by Rhonda Byrne. Website: www.fredalanwolf.com