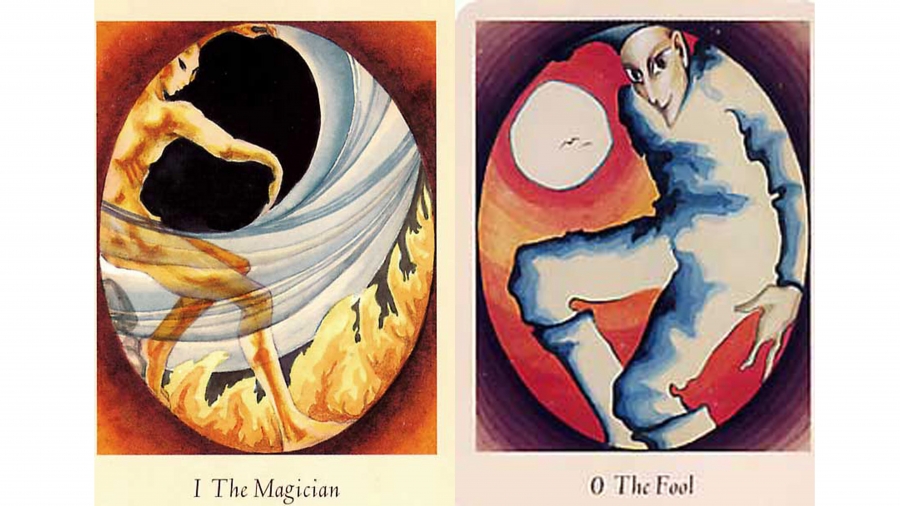 [dropcap]T[/dropcap]he tarot has always been strongly connected to numerology – witness the fact that 13 is traditionally a card of ill omen, and – while the numbers of some Major Arcana have been tinkered with by various esoteric authorities, the Death card stays firmly at 13.
Nowadays we’re ill served by our teachers where numbers are concerned. The Greeks saw them as mystical symbols, their significance far greater than our limited view today. It’s thought the use of numbers could date back to 30,000 BC or indeed far earlier – this piece of ochre shows a regular pattern which could possibly have been for notation, and it dates from 70,000 years ago.

Source: David Lewis-Williams (2002), The Mind in the Cave

The earliest system we know about is that of Babylon – after the first unit of 10 (based presumably on the ten fingers) the second unit is 60 – which still survives today as our time-keeping seconds, minutes and hours. The Greeks took the whole issue of numbers as a philosophical question, particularly with regard to the vexed question of 0 (how can ‘nothing’ be something?, or vice versa). When I was about 16, I learnt a bit about the Pythagorean system, which centres around the idea of order – musical order, mathematical order, the order of the cosmos; and looking at combinations of numbers made sense on some deep atavistic level. Unfortunately I lost the sense of that deep meaning soon after (O level ‘education’ intervened), but more recently I have come to feel that just as I work with the images, the meaning of the number on the card can be intuited. Some of that intuitive ‘feel’ comes from received wisdom – the numbers have had significance since ancient times.

In medieval times numbers were seen as extremely important. Numbers were used as religious symbols, with medieval scholars – Arab, Christian, and Jewish – looking at the correspondence and significance of numbers. Augustine’s book City of God, for example, was consciously divided into 22 sections, to relate to the 22 letters of the Hebrew alphabet (and – later – with the kabbalah, the esoteric Hebrew tradition). I wonder if we could see as synchronous the fact that there are 22 Major Arcana?

Numerology Meaning and The Tarot: First things first, Zero and One

So what do the numbers mean? Let’s start with the most basic and also the most enigmatic: Zero and the One.
In the Tarot we often take for granted the fact that the Fool is 0 (or unnumbered) and therefore is both nothing and something.

But if we stop for a second, the significance of this paradox becomes plain: the Fool is exactly that: both nothing and something. He disturbs and destabilises just because of that: paradox is always slightly disturbing. The Fool is the edge and when we come across him we realise that, to follow him, we have to jump over the cliff into his realm. If we refuse to follow him into the void we become a cipher, a two-dimensional mark. If we choose to follow him, though, we have to give up control, we have to accept that maybe we may all be mad fools – and that maybe we know nothing. Stay with the feeling of the numeral, the fact that it is whole, complete, unique. What else does zero mean to you?

And on to the Ones (Aces) – unity, new beginnings, the number of the primordial being or Divinity, unchangeable, stable and yet mysterious. Ones were seen as the unity behind physical manifestation and the elemental energy – of fire, earth, water and air – is felt most keenly in the Ones. In the Rider-Waite based tarot, each Ace offers a different elemental gift: fire (Wands), earth (Pentacles), Water (Cups) and Air (Swords). The One permeates every number, and shows beginnings and leadership. The One’s quality is encapsulated in the Magician, number One in the Major Arcana.

In The Intuitive Tarot, two elements are configured differently to many tarot: Swords are linked to fire; and wands to air. If you want to get in touch with your passion, work through the One of Swords, using intellect to keep passion in check, but also to harness passion to idea. The One of Rods reaches high into the universe to generate the bubbling of creative inspiration; it is strong, generative, vibrant. The One of Cups is the Grail; reaching deep down into the wellspring of love and grace, it rises through different levels of conscious feeling into a connection with the divine. Last but not least, the One of Discs (Pentacles), representing in geometric format aspects of physical reality: the universe with deep space, nebula, stars, and, nearer to the centre, the sun and its planets. Right in the centre we see the symbol for masculine and feminine. For me, the discs are about energy and manifestation.

Meet the Author: Cilla Conway is an artist, writer and tarot consultant. She is the author of The Intuitive Tarot, published by St. Martin’s Press in 2004, and the Devas of Creation. In 2008 she completed an MA in Psychotherapy & Healing Practice. She is a tarot consultant in Watkins every Tuesday. You can read more of her writings visiting her blog Tarot Card Meanings.