Cart is empty
by watkinsbooks
with no comment
Magazine

The “scientific worldview” is supremely influential because science has been so successful. It touches all our lives through technology and through modern medicine. Our intellectual world has been transformed through an immense expansion of our knowledge, down into microscopic particles of matter and out into the vastness of space, with hundreds of billions of galaxies in an ever-expanding universe.

Yet unexpected problems are now disrupting the sciences from within. Most scientists take it for granted that these problems will eventually be solved by more research along established lines, but some, including myself, think that they are symptoms of a deeper malaise.

Science at its best is an open-minded method of inquiry, not a belief system; it has been successful because it has been open to new discoveries. By contrast, many people have made science into a kind of religion. They believe that there is no reality but material or physical reality. Consciousness is a by-product of the physical activity of the brain. Matter is unconscious. Nature is mechanical. Evolution is purposeless. God exists only as an idea in human minds, and hence in human heads.

I am pro-science. I want the sciences to be less dogmatic and more scientific. I believe that the sciences will be regenerated when they are liberated from the dogmas that constrict them, as I show in my book The Science Delusion (called Science Set Free in the US).  Many new lines of research become possible when we abandon the idea that we already know the answers in principle, leaving only the details to be filled in.

I believe that the sciences will be regenerated when they are liberated from the dogmas that constrict them.

Here are the ten core beliefs that most scientists take for granted. 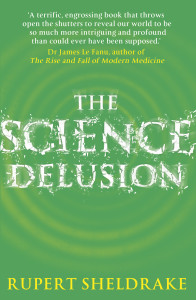 Together, these beliefs make up the philosophy or ideology of materialism, whose central assumption is that everything is essentially material or physical, even minds. This belief-system became dominant within science in the late nineteenth century, and is now taken for granted.

In everyday usage, materialism refers to a way of life devoted entirely to material interests, a preoccupation with wealth, possessions and luxury. These attitudes are no doubt encouraged by the materialist philosophy, which denies the existence of any spiritual realities or non-material goals, but here I am concerned with materialism’s scientific claims, rather than its effects on lifestyles.

The credibility crunch for the “scientific worldview”

For more than 200 years, materialists have promised that science will eventually explain everything in terms of physics and chemistry. Science will prove that living organisms are complex machines, minds are nothing but brain activity and nature is purposeless. Believers are sustained by the faith that scientific discoveries will justify their beliefs. The philosopher of science Karl Popper called this stance “promissory materialism” because it depends on issuing promissory notes for discoveries not yet made. Many promises have been issued, but few redeemed. Materialism is now facing a credibility crunch unimaginable in the 20th century.

Despite the confident claim that genes and molecular biology will soon explain the nature of life, the problems of biological development remain unsolved. No one knows how plants and animals develop from fertilized eggs. Many details have been discovered, hundreds of genomes have been sequenced, but there is still no proof that life and minds can be explained by physics and chemistry alone.

The technical triumph of the Human Genome Project led to big surprises. There are far fewer human genes than anticipated, a mere 23,000 instead of 100,000. Sea urchins have about 26,000 and rice plants 38,000. Attempts to predict characteristics such as height have shown that genes account for only about 5 percent of the variation from person to person, instead of the 80 percent expected. Unbounded confidence has given way to the “missing heritability problem”. Meanwhile, investors in genomics and biotechnology have lost many billions of dollars. A recent report by the Harvard Business School on the biotechnology industry revealed that “only a tiny fraction of companies had ever made a profit” and showed how promises of breakthroughs have failed over and over again.

There is still no proof that life and minds can be explained by physics and chemistry alone.

Despite the brilliant technical achievements of neuroscience, like brain scanning, there is still no proof that consciousness is merely brain activity. The philosopher David Chalmers has called the very existence of subjective experience the “hard problem”. It is hard because it defies explanation in terms of mechanisms. Even if we understand how eyes and brains respond to red light, the experience of redness is not accounted for.

In physics, too, the problems are multiplying. Since the beginning of the 21st century, it has become apparent that known kinds of matter and energy make up only about 4 percent of the universe. The rest consists of “dark matter” and “dark energy”. The nature of 96 percent of physical reality is literally obscure.

Contemporary theoretical physics is dominated by superstring and M theories, with 10 and 11 dimensions respectively, which remain untestable. The multiverse theory, which asserts that there are trillions of universes besides our own, is popular among cosmologists in the absence of any experimental evidence. These are interesting speculations, but they are not hard science. They are a shaky foundation for the materialist claim that everything can be explained in terms of physics.

Materialism provided a seemingly simple, straightforward worldview in the late nineteenth century, but twenty-first century science has left it far behind. Its promises have not been fulfilled, and its promissory notes have been devalued by hyperinflation.

I am convinced that the sciences, for all their successes, are being stifled by outmoded beliefs that protect the citadel of established science, but act as barriers against open-minded thinking.  The sciences would be better off without them: freer, more interesting, and more fun.

Rupert Sheldrake, Ph.D. is a biologist and author of more than 80 scientific papers and 10 books, including The Science Delusion. He was a Fellow of Clare College, Cambridge, a Research Fellow of the Royal Society, Principal Plant Physiologist at ICRISAT (the International Crops Research Institute for the Semi-Arid Tropics) in Hyderabad, India, and from 2005-2010 the Director of the Perrott-Warrick Project, funded from Trinity College, Cambridge. www.sheldrake.org