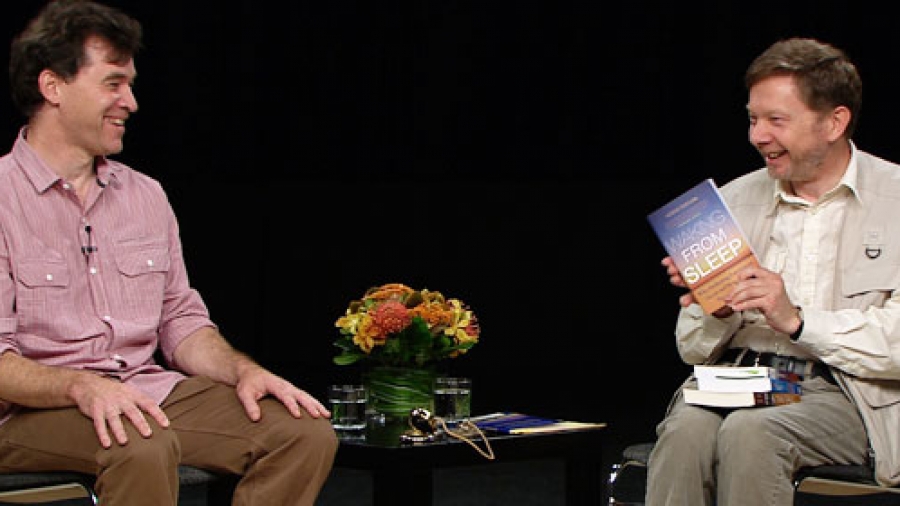 On Taking Part in a Dialogue with Eckhart Tolle

[dropcap]W[/dropcap]hen I was invited to take part in a dialogue with Eckhart Tolle, to be broadcast on Eckhart TV, I wondered if I might be slightly nervous. But when I found myself on stage, sitting next to Eckhart in front of around 300 people and four TV cameras, the opposite was the case. I felt a very powerful sense of stillness and calm. I felt that this was emanating from Eckhart, and possibly amplified by the audience. There was a strong feeling of benevolence. I felt completely comfortable just sitting there, absorbing the stillness, listening to Eckhart. It was a great feeling, but… ‘Hold on,’ I told myself, at one point, ‘I’m not in the audience, I’m on the stage. I’m taking part in a dialogue, I’ve got to speak!’

There was no problem – how could there be, while my mind was quiet and still? But I wondered how much time had passed since I had last spoken. Time can behave very strangely in spiritual states. Sometimes it goes quickly, sometimes slowly. Sometimes it disappears altogether.

But once I spoke, words seemed to flow very easily. I loved Eckhart’s impish sense of humour. At times the dialogue was so funny that I wondered if we might have a future career as a comedy double act. (As yet, we haven’t had any offers.)

At one point, Eckhart and I talked about how being ‘awake’ lends itself to creativity. Once the ego is quietened, you have easier access to deeper levels of the mind, and even to a spiritual source beyond the mind. Eckhart suggested that was why I have been able to write so many books over the last few years, despite having three young children and my other work commitments. And our dialogue seemed to spring from this spiritual source too.

The ‘raw material’ – or maybe we should call it ‘raw spirituality’ – from this source can take myriad different forms, just as life itself can take endless forms. The many varieties of spiritual teachings and writings are different expressions of the same essence, like different views of a landscape, which add to the clarity of the whole scene.

I see Eckhart as a spiritual teacher, a guru, who is so powerful because his teachings aren’t rooted in any particular tradition, but arise directly from a ‘perennial’ oneness which is beyond all concepts or traditions. I feel connected to that oneness too, but I don’t see myself primarily as a spiritual teacher, more as a writer and psychologist (one of my worldly roles is as a university lecturer in psychology).

On the other hand, I’m also a poet – in fact, one of the great joys of the dialogue was hearing Eckhart read aloud some of the poems from my book The Meaning. Poetry is the way I directly express my awareness of perennial oneness.

This article was originally published in the February newsletter of Eckhart TV. You can see a clip from my dialogue with Eckhart on his Facebook page: www.facebook.com/photo.php?v=10151450033235831

Steve Taylor PhD is a senior lecturer in psychology at Leeds Metropolitan University in the UK. He is the author of several best-selling books including The Fall, Waking from Sleep and Back to Sanity. He is also a poet. He recently took part in a dialogue with Eckhart Tolle, who refers to his work as ‘an important contribution to the global shift in consciousness’. In 2012 and 2013, Steve was included in Watkins’ Mind, Body, Spirit magazine’s list of ‘the world’s 100 most spiritually influential living people’. www.stevenmtaylor.co.uk