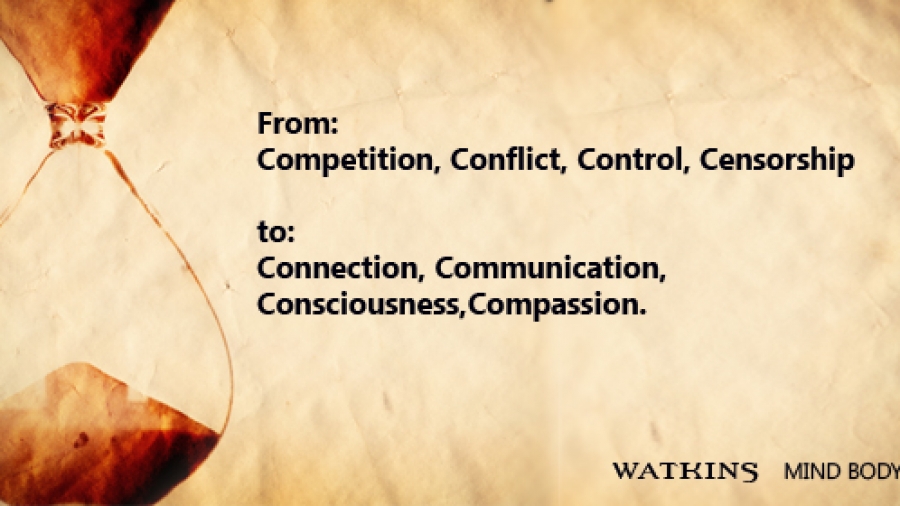 [dropcap]I[/dropcap]n the years ahead we are going to see great change sweeping through our diverse human societies. Some may say we are in the midst of a 3rd Industrial Revolution. Yet rather than referring to this transition as an ‘industrial’ one, I consider this profound shift as a Revolution in Human Being – or rather as a Revolution in Human Becoming. We have entered a phase where there will be new forms, new arrangements, new structures, new perspectives, and new emerging states of being.

We are, quite literally, shifting from one set of C-Values – Competition ~ Conflict ~ Control ~ Censorship – to a new set: Connection ~ Communication ~ Consciousness ~ Compassion. The world is re-arranging in order to come together in countless new ways – with innovative changes in our communication, our uses of technology, through conscious awareness, through people-centred action, and more. These are the seeds coming to harvest as part of a re-awakening, re-ordering, and re-balance upon this planet. The current generation(s) will be the ones who will have to shoulder the mental and emotional responsibility of change as they are forced to let go of both external and internal systems and states that are no longer beneficial to our future development. This is why I have termed our current generation(s) the ‘Bridge Generation’, as we will be required to straddle both worlds. Many people in the Bridge Generation will feel the stirrings of a ‘calling’; a sense to activate something – some purpose or meaning – within them. Some may be attracted to books/writings, or to events, gatherings, or other signifiers. Other ways to activate a person’s calling – or actualized state – may come through doing; whilst others will be through being.

Change upon this planet will come through us, the people; and the attitudes, awareness, compassion, sincerity, etc, which we embody and manifest. This is the real stability that can be passed on to those around us: our family, friends, communities, social networks, and so on. As balanced, subtle, uplifting energies manifest through more and more people, change will increasingly manifest within our external environments. Again, it will not appear overnight. Already there are countless examples of how this wave of change is occurring across the planet. Such examples include how people interact with new technologies; the impacts of social media; new emerging youth groups; and the rise of a global empathic mindset. The power of energetically-connected individuals is fuelling the ‘We’ feeling and bringing the disenchanted together to develop their networks. Such new systems are showing that a new type of consciousness is arising which will mark the generations to come. Those generations that come after us will be born as change rather than being born into change – this is a slight yet very significant difference.

The generation now being born into the world is what I refer to as the Phoenix Generation: those children being born now who will be young adults around 2030. I suggest that it will be this generation in particular that will assist in the transition toward forming a planetary society – a transition more radical than the shift from agrarian to urban life during the 1st Industrial Revolution. This is a revolutionary transition from national-cultural consciousness to planetary awareness and consciousness. What this entails is not only a structural shift but also a qualitative one; that is, a shift in our values, psychology, and consciousness. It is my view that those of the Phoenix Generation will be born with increased instinctive intelligence and with a greater degree of inherited wisdom.

As the Phoenix Generation grow up and integrate into and participate in their respective societies there will naturally be changes in many diverse areas of social life; such as health, politics, media, technology use, innovation, and spiritual practice. A new awareness of spirituality will emerge, where old institutional dogmas are replaced by increasing individual gnosis. We are moving toward the empowerment of the individual – of each human being – and this is frightening for the controlling authority structures. The Phoenix Generation will likely be the ones to free humanity from the dominance of erroneous ideas – ideas that forged war, created poverty and hunger, and sustained dis-ease. We are giving birth to a generation that will be successful in removing these illusions from the field of human consciousness.

Those of the Phoenix Generation will usher in a period where the feminine and masculine energies of the world will be re-balanced. Human values of love, compassion, understanding, patience, tolerance, and empathy will be more openly expressed and part of an active world – and not seen as predominantly ‘female’ values. The division that separates the masculine and feminine energies will gradually be replaced by a newer energy of unity – of coming together. Similarly, the artificial stigma around ‘male’ and ‘female’ roles in the world will be changed through the younger ‘phoenix’ men and women re-modelling role expectations. Women’s participation will be more keenly appreciated, sought, and brought into collaboration in such major areas as global politics, economy, and business. An all-round intuitive energy will be the marker for the upcoming decades, and will find expression through young women of the Phoenix Generation holding key positions as change agents. We are moving toward an era of human evolution where integral energies – energies of coherence and harmony – will be established as the principle foundation.

The Phoenix Generation will actualize upon this planet in accordance with generational, evolutionary trends – giving rise to a new form of consciousness. This new wave of consciousness will then gradually seep into the core of all our future societies. Our responsibility now is to fully engage and be a part of the human becoming that we truly wish to see in the world. This requires that we spearhead the transition at hand and that we show, through our behaviour, the new models for change. We have the opportunity, and capacity, to do this for ourselves and, more importantly, for those to come – and this shall be our true legacy.

Meet the Author: Kingsley L Dennis, PhD, is a sociologist, researcher, and writer. He is the author of several critically acclaimed books including New Consciousness for a New World, New Revolutions for a Small Planet, After the Car; and the celebrated Dawn of the Akashic Age (with Ervin Laszlo). He previously worked in the Sociology Department at Lancaster University, England. Kingsley is the author of numerous articles on social futures, technology and new media communications, global affairs, and conscious evolution. He lives in Andalusia, Spain. www.kingsleydennis.com