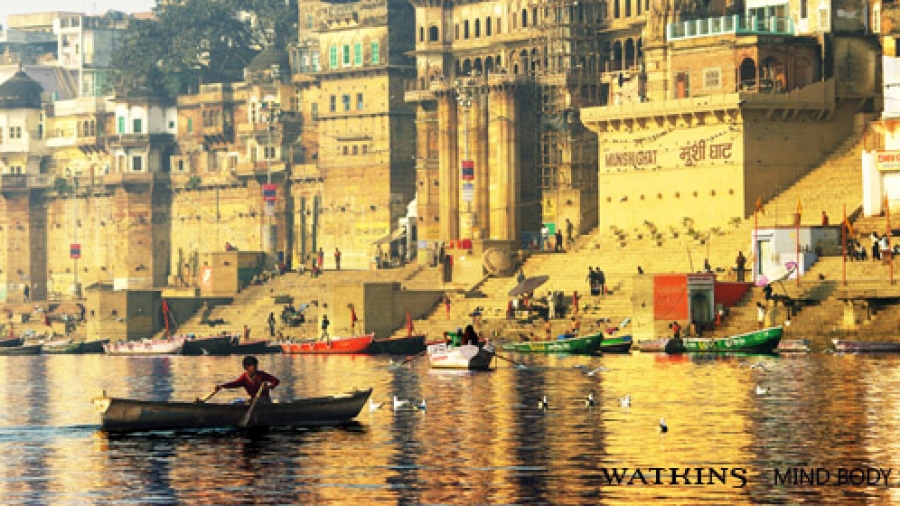 by Watkins Books
with no comment
Consciousness studiesMagazineModern teachersYoga and Meditation

(Edited and adapted by Christi Cox)

[dropcap]W[/dropcap]hen Paul Brunton visited Ramana Maharshi in the 1930s, he was perhaps the first Westerner to stay in the ashram for an extended period.  Certainly he was the first to write about Ramana for Westerners, in his popular book A Search in Secret India. The publicity brought the attention of the world to Ramana’s powerful “Who am I?” exercise; his self-enquiry approach is widely used by today’s foremost spiritual teachers. In these excerpts, selected and adapted from his book, Brunton describes his outer – and extraordinary inner – experience of being with the great master.

The divan is but a few paces away from a broad high window in the end wall. The light falls clearly upon the Maharishee and I can take in every detail of his profile, for he is seated gazing rigidly through the window in the precise direction whence we have come this morning. His head does not move, so, thinking to catch his eye and greet him as I offer the fruits, I move quietly over to the window, place the gift before him, and retreat a pace or two.

I fold a thin cotton blanket upon the floor and sit down, gazing expectantly at the silent figure in such a rigid attitude upon the couch. The Maharishee’s body is almost nude, except for a thin, narrow loin-cloth, but that is common enough in these parts. His skin is slightly copper-coloured, yet quite fair in comparison with that of the average South Indian. I judge him to be a tall man; his age somewhere in the early fifties. His head, which is covered with closely cropped grey hair, is well formed. The high and broad expanse of forehead gives intellectual distinction to his personality.

There is something in this man which holds my attention as steel filings are held by a magnet. I cannot turn my gaze away from him. My initial bewilderment, my perplexity at being totally ignored, slowly fade away as this strange fascination begins to grip me more firmly. But it is not till the second hour of the uncommon scene that I become aware of a silent, resistless change which is taking place within my mind…. I know only that a steady river of quietness seems to be flowing near me, that a great peace is penetrating the inner reaches of my being, and that my thought-tortured brain is beginning to arrive at some rest.

“Setting apart time for meditation is only for the merest spiritual novices,” Ramana says. “A man who is advancing will begin to enjoy the deeper beatitude, whether he is at work or not. While his hands are in society, he keeps his head cool in solitude.”

“Then you do not teach the way of Yoga?”

“The Yogi tries to drive his mind to the goal, as a cowherd drives a bull with a stick, but on this path the seeker coaxes the bull by holding out a handful of grass!”

“You have to ask yourself the question, Who am I? This investigation will lead in the end to the discovery of something within you which is behind the mind. Solve that great problem, and you will solve all other problems thereby.”

There comes a perceptible change in the telepathic current which plays between us, the while my eyes blink frequently but his remain without the least tremor. I become aware that he is definitely linking my own mind with his, that he is provoking my heart into that state of starry calm which he seems

perpetually to enjoy. In this extraordinary peace, I find a sense of exaltation and lightness. Time seems to stand still. My heart is released from its burden of care. Never again, I feel, shall the bitterness of anger and the melancholy of unsatisfied desire afflict me. I realize deeply that the profound instinct which is innate in the race, which bids man look up, which encourages him to hope on, and which sustains him when life has darkened, is a true instinct, for the essence of being is good. In this beautiful, entranced silence, when the clock stands still and the sorrows and errors of the past seem like trivialities, my mind is being submerged in that of the Maharishee and wisdom is now at its perihelion. What is this man’s gaze but a thaumaturgic wand, which evokes a hidden world of unexpected splendour before my profane eyes?

* * * * *From time to time the Maharishee unexpectedly visits me at the hut after finishing his own lunch. I seize the opportunity to plague him with further questions, which he patiently answers in terse epigrammatic phrases, clipped so short as rarely to constitute complete sentences. But once, when I propound some fresh problem, he makes no answer. Instead, he gazes out towards the jungle-covered hills which stretch to the horizon and remains motionless.

For almost half an hour the Maharishee’s eyes continue to stare straight in front of him in a fixed, unmoving gaze. He appears to have forgotten me, but I am perfectly aware that the sublime realization which has suddenly fallen upon me is nothing else than a spreading ripple of telepathic radiation from this mysterious and imperturbable man.

On another visit he finds me in a pessimistic mood. He tells me of the glorious goal which waits for the man who takes to the way he has shown.

“But, Maharishee, this path is full of difficulties and I am so conscious of my own weaknesses,” I plead.

“That is the surest way to handicap oneself,” he answers unmoved, “this burdening of one’s mind with the fear of failure and the thought of one’s failings…. The greatest error of a man is to think that he is weak by nature, evil by nature. Every man is divine and strong in his real nature. What are weak and evil are his habits, his desires and thoughts, but not himself.”

Finally it happens. Thought is extinguished like a snuffed candle. The intellect withdraws into its real ground, that is, consciousness working unhindered by thoughts. I perceive, what I have suspected for some time and what the Maharishee has confidently affirmed, that the mind takes its rise in a transcendental source. The brain has passed into a state of complete suspension, as it does in deep sleep, yet there is not the slightest loss of consciousness. I remain perfectly calm and fully aware of who I am and what is occurring. Yet my sense of awareness has been drawn out of the narrow confines of the separate personality; it has turned into something sublimely all-embracing. Self still exists, but it is a changed, radiant self. For something that is far superior to the unimportant personality which was I, some deeper, diviner being rises into consciousness and becomes me. With it arrives an amazing new sense of absolute freedom, for thought is like a loom-shuttle which is always going to and fro, and to be freed from its tyrannical motion is to step out of prison into the open air.

I find myself outside the rim of world consciousness. The planet which has so far harboured me, disappears. I am in the midst of an ocean of blazing light. The latter, I feel rather than think, is the primeval stuff out of which worlds are created, the first state of matter. It stretches away into untellable infinite space, incredibly alive.

I touch, as in a flash, the meaning of this mysterious universal drama which is being enacted in space, and then return to the primal point of my being. I, the new I, rest in the lap of holy bliss. I have drunk the Platonic Cup of Lethe, so that yesterday’s bitter memories and to-morrow’s anxious cares have

disappeared completely. I have attained a divine liberty and an almost indescribable felicity. My arms embrace all creation with profound sympathy, for I understand in the deepest possible way that to know all is not merely to pardon all, but to love all. My heart is remoulded in rapture.

How shall I record these experiences through which I next pass, when they are too delicate for the touch of my pen? Yet the starry truths1 which I learn may be translated into the language of earth, and the effort will not be a vain one. So I seek, all too roughly, to bring back some memorials of the wonderful archaic world which stretches out, untracked and unpathed, behind the human mind.

I return to this mundane sphere impelled by a force which I cannot resist. By slow unhurried stages I become aware of my surroundings. I discover that I am still sitting in the hall of the Maharishee and that it is apparently deserted. My eyes catch sight of the hermitage clock and I realize that the inmates must be in the dining-room at their evening meal. And then I become aware of someone on my left. It is a seventy-five-year-old ex-stationmaster, who is squatting close beside me on the floor with his gaze turned benevolently on me.

“You have been in a spiritual trance for nearly two hours,” he informs me. His face, seamed with years and lined with old cares, breaks into smiles as though he rejoices in my own happiness.  “The Maharishee watched you closely all the time. I believe his thoughts guided you.”

When the sage returns to the hall, those who follow him take up their positions for the short interval which precedes the final retirement for the night. He raises himself up on the divan and crosses his legs; then, resting an elbow on the right thigh, he holds his chin within the upright hand, two fingers covering his cheek. Our eyes meet across the intervening space and he continues to look intently at me.

The heavily scented incense smoke rises in soft spirals the while I watch those eyes that never flicker. During the forty minutes which pass so strangely, I say nothing to him and he says nothing to me. What use are words? We now understand each other better without them, for in this profound silence our

minds approach a beautiful harmony, and in this optic telegraphy I receive a clear unuttered message. Now that I have caught a wonderful and memorable glimpse of the Maharishee’s view-point on life, my own inner life has begun to mingle with his.

With the fall of dusk I take my farewells of everyone except the Maharishee. I feel quietly content because my battle for spiritual certitude has been won, and because I have won it without sacrificing my dearly held rationalism for a blind credulity.

I linger over our parting, unable to express the profound emotions which move me.  I raise my palms and close them together in the customary salutation and then mutter a brief good-bye. The sage smiles and looks at me fixedly, but says not a word.

One last look towards the Maharishee, one last glimpse by dim lantern light of a tall copper-skinned figure with lustrous eyes, another farewell gesture on my part, a slight wave of his right hand in response, and we part.

I climb into the waiting bullock-cart, the driver swishes his whip, the obedient creatures turn out of the courtyard into the rough path and then trot briskly away into the jasmine-scented tropic night.

Some of the “starry truths” to which Brunton refers are described, along with much other detailed and helpful material for spiritual seekers, in his many books. For more information on Paul Brunton and his work go to: www.paulbrunton.org

Christi Cox is a writer and editor. Her articles have appeared in Tricycle, Yoga Journal, Quest, Best Spiritual Writing 2010, and Snow Lion: The Buddhist Magazine, of which she was the editor. She first met Paul Brunton in 1971.