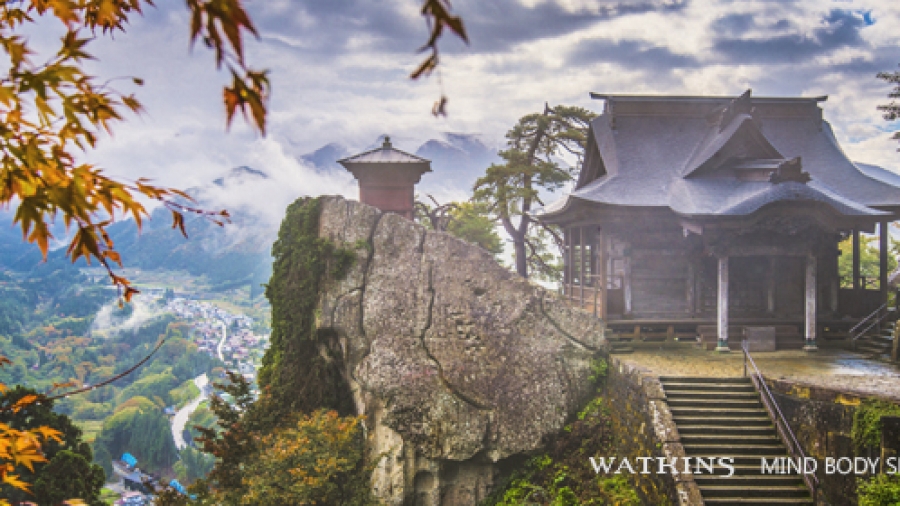 In Japan there are roughly two dozen secret manuscripts originally dating back to the paleolithic era, the age of heroes and gods, that have been handed down by the ruling families for centuries. Rejected by orthodox Japanese scholars and never before translated into English, these documents speak of primeval alphabets, lost languages, forgotten technologies, and the sacred spiritual science. Some even refer to UFOs, Atlantis, and Jesus coming to Japan.

[dropcap]I[/dropcap]n 1950, a Japanese scientist doing fieldwork in the mountains was approached by a fur-clad trapper bearing a scroll full of ancient poetry. The poems were a message from the ancient past, preserved by the hunter’s family for generations in a remote wooden shrine called Katakamuna. He asked the scientist, whose name was Satsuki Narasaki, to decipher his family’s ancient treasure. After Narasaki copied down the ancient script in his notebook, the mountain man went back into the woods, never to be seen again. A strange story—but that’s how Narasaki says he received the mysterious text called the Katakamuna Documents, which describe a very different kind of knowledge about the world.

The experience of knowing these documents is not just a matter of reading the claims within the text, or even listening to them as poetry. Like secret Hermetic texts, they must be read closely with serious concentration. But the dedicated few who are willing to take on the challenge will learn about a different way of looking at the universe and how to detect spiritual energies on the face of the earth, giving us a unique Japanese perspective on the power of ancient sacred sites. There are two important things to understand about the documents before we can try to read them. The first is that the language they are written in, although it often resembles Japanese, echoes more ancient forms and cannot often be translated directly. We must read them as the language spoken by the ancient Katakamunan people, in which every syllable is imbued with symbolic meaning. The poems are meant to awaken one’s inner sense of creativity, so reading them is more than just putting the teacher’s thought into the disciple’s head, but is a matter of looking into the origins of every word to encourage interpretation, inspiration, and discovery. The second thing to understand is that the Katakamuna Documents are written in a special style, much more visual than most scripts in use today. Called the Eight-Mirrored Script, its forty-eight syllables are drawn entirely using circles and chords, corresponding to the sounds of ultra-ancient Japanese. As shown in the diagram below, this script is not written in straight lines, but spirals out from the center of the page. At this pivotal center of every haiku-like poem lies one of three symbols which carry cosmological rather than linguistic meaning. I know of no other script like it in the world.

The first poem of the Documents proper runs like this:

No simple translation can be made for this poem, but I can provide a definition of each syllable and element, after which the reader can reexamine the poem: Our world of forms (kata) is differentiation (ta) of energy (ka), which we know to be derived from essence (kamuna), the energy (ka) of qualitative (mu) Being/Name (na). The limitless, immaterial kamuna behind kata now resonates (hihiki). This resonation awakens us to “the power to get ourselves in tune with the force that controls change in the universe-sphere” (ma-no-suheshi). The resonance is a song (u-ta-hi), a creation (hi) of differentiation (ta) of the reception of essence (u). Representing (tsushi) the reception of essence (u) through this song, and protecting (tsuru) the method of this reception (ma), Ashia Touan transcribes (u-tsushi) and honors (ma-tsuru) the Utahi of Katakamuna.

Every syllable of every word of Katakamunan Japanese corresponds to a specific concept, and when we combine some of those forty-eight syllables to make a new word they interact with each other in interesting ways. Some of these words still exist in modern Japanese, for example na for name, kata for form, utsushi for transcription, and matsuru for sanctification. By taking apart these words we realize that while we simply think of a concept like matsuru as a primitive practice of religious worship, it once signified the need to protect the methods by which our ancestors received power from the dimension of Essence. Other concepts, like ta and mu, have been forgotten in modern Japanese, which is why it is important for people to understand the origin of Japanese in Katakamunan.

Understanding how to see the world through the ancient eyes of the Katakamunans begins with our concept of the universe. In the Katakamunan worldview the observable universe is just one half of Creation. The other half is the unseen world of essence against which the visible world exists in a state of opposition. When these worlds interact, in a process called amautsushi, the reaction gives birth to new life, thought, art, or any kind of creative thing. In modern Japanese, amautsushi means “reflecting the heavens.” In Katakamuna, it is “transcription” (utsushi, defined above) of the “openings into origin” (a-ma).

There are two ways for a human society to orient itself toward awareness of amautsushi. The first is to demean it as the private experiences of individuals and shut it out of everyday life. This is the way followed by modern civilizations, which Katakamuna researcher Jiro Sekigawa says are ‘oriented towards the downfall of humanity’.  Such civilizations suppress our natural instinct towards the supermaterial world, but because that world rules over the material world these cultures are bound to eventually collapse out of their own ignorance and thoughtless ‘opposition’.

The Katakamunans, on the other hand, embraced amautsushi and tried to make it part of their everyday lives. There experiences were full of resonances received from the supermaterial world and transformed into creative power. Therefore, they called their nation kata-kamu-na: kata, “form” or “formed from,” kamu, “essential,” and na, “names” or “principles.” Modern Japanese people are not aware of it, says Sekigawa, but it was their own ancestors who possessed this knowledge, and the modern language is full of survivals from that time. ‘The Japanese people originate from a society that was ‘properly facing,’ and the high ancient language of that origin’s progenitors, the kami, is still being used today’.

What was life like in the Katakamunan world? The documents themselves contain no historical information so we don’t know much about their authors and their culture. Presumably, living tens of thousands of years ago, they were hunter-gatherers. But we know their descendants are the modern Japanese because they determined the locations of their festivals and gatherings by seeking out good places, called iyashirochi, for living things to naturally receive amautsushi, and these iyashirochi hotspots are now the locations of Japan’s oldest shrines. The word iyashirochi can be broken down in modern Japanese as ii yashiro chi = ‘good place for a shrine’. It also contains the word iyashi which means relaxation and healing.[span3]In the Katakamunan language tokoro, or space, is filled with ma (literally “openings,” but used in modern Japanese to mean something like “opportunities,” like ma ni awanai “I won’t have the chance”). Time, toki, is filled with i-ma (moments) in the same way.[/span3]

Modern people only conceive of space as an empty expanse full of inert, mechanical processes, but this is our false imagination. In the Katakamunan language tokoro, or space, is filled with ma (literally “openings,” but used in modern Japanese to mean something like “opportunities,” like ma ni awanai “I won’t have the chance”). Time, toki, is filled with i-ma (moments) in the same way.

Therefore, all places and times are openings and moments by which amautsushi might be let in, if we can only become aware of it. The way to harness amautsushi is to escape from the tedium of the everyday into the immediacy of now, and then redirect that awareness of your present condition and behavior into your efforts. In our everyday lives we tend to tediously repeat the same actions over and over—this routine is precisely what must be overcome. ‘Taking as an example’, says Sekigawa, ‘the homology demonstrated in animals molting and hatching, and flowers blossoming, we can make our hearts start working by escaping our old ways and matching up to the right ‘resonances.’ A few teachers, such as Buddha, Lao Tzu, Christ, and Socrates, have been able to do this.’

The power of amautsushi, according to Katakamuna researchers, cannot be underestimated.

Sekigawa calls it ‘the basic principle of creation’. Although the Katakamuna Documents remain esoteric and obscure within Japan, those who read them are often inspired to creations of their own, such as new theories on ancient East Asian civilization, or interpretations of the healing power of Chinese medicine. Regardless of how old the documents actually are, in the present day we might describe them as a sacred science grounded in the Japanese tradition.

Meet the Author: Avery Morrow’s research on the basis of Asian folk traditions has been published in several academic journals. His interest in parahistory brought him to Japan, where for three years he researched various documents, taught English, visited sacred sites, and worked as a translator and assistant to renowned Shintoist Shin’ichi Nakaya. www.avery.morrow.name

Avery Morrow
The sacred science of ancient Japan:Lost Chronicles of the Age of the Gods
Inner Traditions Bear and Company