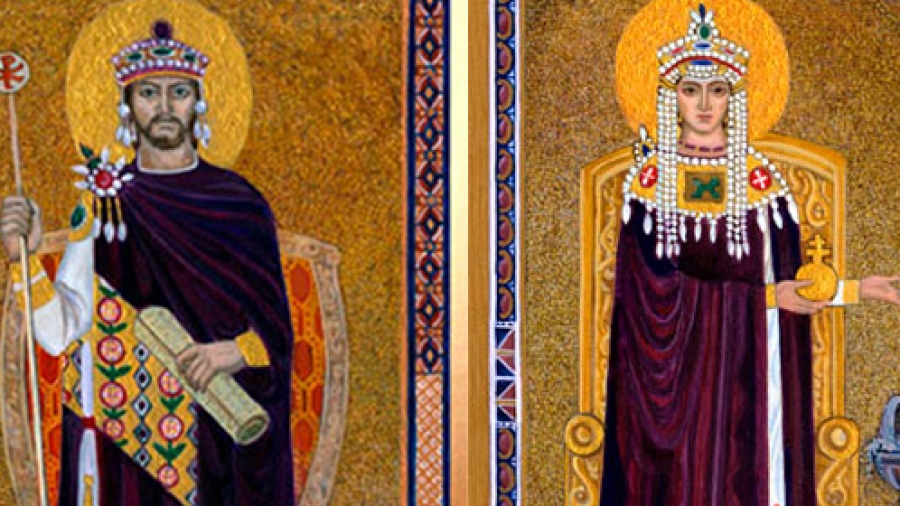 The Byzantine Tarot by John Matthews and Cilla Conway

[dropcap]O[/dropcap]n the 16th June this year, John Matthews and Cilla Conway are launching The Byzantine Tarot, a new and sumptuous deck. The deck is unusual in that the artwork has been produced using traditional techniques – egg tempera on gesso and hide, highlighted with gold – and all the imagery and concepts are drawn directly from Byzantine sources.

The deck came about mainly due to a postcard of Elijah sent from St Catherine’s Monastery in Sinai to Watkins. Cilla was struck by the image’s similarity to the tarot Hermit, an archetype with which she was very familiar, having painted her first tarot deck, The Intuitive Tarot, more than 40 years ago (she has been a reader at Watkins, using her own cards at Watkins since 2003). The image made such an impression that she realised she would like to paint another deck, although it might well have stayed a pipe dream had not she attended the launch of John’s The Lost Tarot of Nostradamus at Watkins. In one of those synchronous events that shapes the future, Cilla mentioned to him her interest in a Byzantine tarot, and found that he had also thought of doing a deck on Byzantium – had, indeed, already produced a proposal for the deck. John being a writer and Cilla an artist, they decided to put their heads together to see what emerged.

As soon as they began to research concepts of the tarot in Byzantium, things began to fall into place. Cilla realised that the Fool image derived directly from the fact that in Byzantium, the Holy Fool was a familiar figure – indeed, was probably the pattern for the original archetype. These ragged, unconventional religious fanatics lived in the wilderness but would come into the towns to harangue and shock the populace, in the hopes of forcing people to realise their impiety. The Hermit, of course, was the original image in the postcard from St. Catherine’s monastery with an additional lantern and staff. The Emperor and Empress were based on Emperor Justinian and his wife, Theodora. The Patriarch was modelled on the early Church leaders, many of whom we in the west assume were Catholic, but who led the Orthodox Church from the eastern Roman Empire for hundreds of years … and so it went. Although we think of the Byzantine Empire as a lost civilization, it lasted for 1100 years and was in many respects the basis for our culture today. As John and Cilla’s collaboration continued, the deck took shape as a set of rich, iconic images.

For Cilla, painting the deck was a magical experience. One by one the cards emerged, each with their own stories and mythology. Each day another facet of the Empire (based on Byzantine icons, mosaics and wall paintings) would appear on her easel. The collaboration between John and herself was extremely fruitful, giving ideas and helping her to dispel design issues (for instance, Death as a separate entity did not exist in Byzantium, it was usually depicted as the soul being released in to Christ’s waiting arms; so the figure of Death had to be designed from scratch). Three years after John and Cilla began the deck, it was complete, leaving them with an enhanced respect for the lost Empire – and sorrow that humanity will never see its like again.

John Matthews is an historian, folklorist and author. He has been a full time writer since 1980 and has produced over ninety books on the Arthurian Legends and Grail Studies, as well as short stories and a volume of poetry. He has devoted much of the past thirty years to the study of Arthurian Traditions and myth in general. Creator of The Intuitive Tarot, Cilla Conway has been using the tarot since 1981 for consultations.