Your cart is currently empty.
by watkinsbooks
with no comment
Astrology
0

“Every Wednesday I sit in the window at Watkins, waiting to give Tarot readings; watching people come & go, overhearing snippets of arcane conversations and reflecting on …
…ON TAROT AND CURRENT EVENTS.

Now it’s worth taking a little time to discuss the selection of the Significator card.  Really I just want to underline that you need to pick the card that fits to your eye, to your judgement, to your opinion.  You may use the same deck as me and come up with a very different card because we each have our individual responses to the cards and to the person we’re selecting for.  If with your cards and your eye the card for Nick Clegg is the Devil, or Temperance or the King of Wands then use it.

Here’s an example of my own process.  This was another political reading to see whether Hilary Clinton or Barack Obama would win the nomination of the Democratic party to be the Presidential candidate.  As Clinton was already a powerful and established figure she would have to be a queen.  The card that represented her would have to be one demonstrating power an  drive; that (for me) narrowed it down to either the Queen of Wands or of Swords.  Going by her colouring and more caring nature I picked the Queen of Wands.  For Obama I decided that as a relative newcomer with intense charisma and drive he would have to be a Knight; the suit was trickier, could be Cups (more emotional and inclusive) or Wands (dynamic and uplifting); not Swords (too divisive)  and not Discs (too static).  I decided for Wands mostly because both Clinton and Obama were of the same political party and general principles and so should be the same suit.

Here’s the reading for the two of them 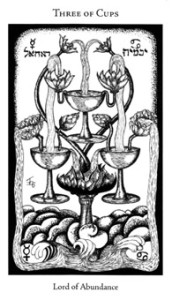 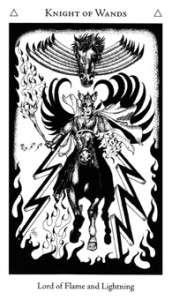 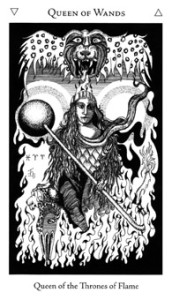 Once again one significator was at the end of the sequence – the Queen of Wands has only one card, and that is the Knight of Wands.

So he has enormous influence over her, though of course they are compatible.  He, on the other hand has support via compatibility on one side and the happy 3 of Cups on the other.  Obviously Obama wins.

It’s interesting to note the closeness of their cards which may indicate the fact that they now work fairly closely together; though of course I didn’t think of that at the time.

So that’s an example of one way that I use to select indicator cards; but it’s just one way.  Let me repeat – pick the card that fits to your eye, to your judgement, to your opinion.

Now at this point you may be thinking how wonderful this method is and how clever I am; well – sorry – not so.

I used this method all through the last World Cup and made a total botch of it.  I won’t embarrass myself by showing you examples, but believe me a blind monkey would have done better!  So what happened?

I was using the wrong method.  It was as simple as that.  I picked the Significator card for the manager of each team and then did a reading for each of them  Wrong wrong wrong.  I hadn’t thought deeply enough about what I was doing.  It should have been obvious that if the managers don’t show up at the match the teams can still play; but if the managers are there but no players, there can be no match!  Further – suppose an underdog team and manager play a world class team and almost win but lose in the end?  The reputation (and so future prospects) of the losing manager are enhanced and that of the winning manager diminished; so who gets the good cards?

Now there are two points here, one obvious and one subtle.  The first is that I could have found someone in each match who would epitomise the team; a real figurehead, just like a political leader just before an election.  The trouble is – who?  Not the manager; the team leader? the goalkeeper? there’s a thought.  But does even the goalkeeper  really act as Significator for the whole team?

Perhaps then we go back to the original method I’ve detailed at the start – do the reading on behalf of person who will be directly affected by the event in question.

Does this mean we have to go out and find a fan for each and every team in each and every game and give them a reading?  Well ideally yes.  That would be the best method and a lot of hard work; which may explain why it’s the best.  But there is another approach; simply take any one of the team (yes – even the manager) and do a reading for them, not about them.  This is the more subtle point.

In those readings I had forgotten the basic principle that I outlined in my very first piece here – “Getting what you want … “ In other words I could have done a reading using the managers as I did, but on the basis of “How likely are they to get want they want in this instance?”  Rather than  “What is this person’s future likely to be?”  A subtle change but it shows the importance of always going back to the basics; what do you want? and what does the signified person want?

When we get that right everything is in place.

May we all have Good fortunes!