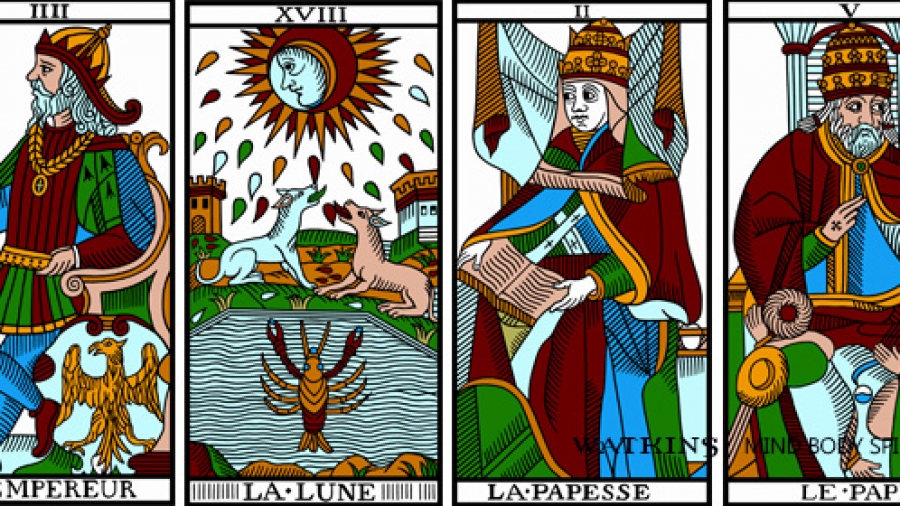 [dropcap]M[/dropcap]any things have been said about the Tarot, lots of which are pure invention and fantasy. There is no conclusive research to this day as to where it comes from and who invented it. No one knows what the word Tarot means or to what language it belongs. Nor does anyone know if Tarot was like it is from the beginning or if it is the end result of a slow evolution that began with the creation of an Arab card game called naibbe (cards) to which were added over the course of the years the Major Arcana and those whimsically called the Honours or Court Cards. The idea of creating new versions of the Tarot of Marseille, anonymous like all sacred monuments, by imagining it is enough to change the drawings or the names of the cards to achieve a great work, is pure vanity.

The Tarot is crafted with such great precision, its internal relations and geometrical unity are so perfect, that it seems impossible to believe that this work was achieved by a solitary initiate. Merely the invention of the structure, the creation of the personages with their dress and their gestures, and the establishment of the abstract symbology of the Minor Arcana requires a great many years of intense labour. The short span of a single human lifetime would not be enough. What was the intention of the creator of this nomadic cathedral? Was one lone human being capable of giving shape to such a great encyclopedia of symbols? Who was capable of amassing such knowledge in a single lifetime?

We can emit a theory about its origins that is both likely and useful: it was probably created sometime between the years 1000 and 1400 by wise men and women from the three main monotheistic religions who wanted to unite their symbolic and numeric wisdom and give it away to all those who could see. As the public of those days was massively illiterate, their common work of sacred art was designed as a series of pictures united by a series of internal coherent bonds – numbers, symbols and names which, placed in the appropriate order, end up forming a mandala, a complete image of the universe. The 78 arcanas of the Tarot can either be viewed all together or separately, united two by two, then three by three, and so on in segments of meaning that all relate to the “bigger picture”. In its totality, the Tarot as a mandala is a comprehensive portrait of human and cosmic experience, a mirror of our soul that is reflected in its mundane aspects as well as in its most sublime dimensions. The Tarot can help us better understand our Subconscious, with its dark corners and family conflicts, our creative processes, our material life, our attachements and emotions, our ideas, as well as our Supra-conscious aspirations to becoming one with the unthinkable force that sustains the Universe.

Alejandro’s first encounter with the Tarot happened in the early fifties, in Santiago de Chile, through a sixty-year-old Frenchwoman, Marie Lefèvre, who shared her dinner and read the cards to a bunch of young wandering poets. That extraordinary woman, always accompanied by her eighteen-year-old boyfriend, always had a full pot of soup simmering in her kitchen, a chaotic magma that contained the leftover food the neighbouring restaurant gave her in return for her card readings for its customers. While her naked lover snored away, Marie, wrapped in a Chinese dressing gown, served full bowls of the delicious broth before she proceeded to the Tarot reading, using cards of her own making. For Alejandro, the Tarot has forever remained linked to generosity and boundless love.

André Breton then drew his attention to the fact that the only Tarot deck that was worth studying was the Tarot of Marseille, as it was the closest to the original. For a long time, the only version of the Marseille Tarot was the one that Paul Marteau had put together and published in 1930 – it was this one that Breton favoured. When the young Alejandro, expecting Breton’s approval, naively offered him a Rider Waite Deck, the Pope of Surrealism examined the cards with a smile that soon transformed into a grimace of disgust. ‘This is a ridiculous deck of cards. Its symbols are lamentably obvious. There is nothing profound in it. The sole valid Tarot is that of Marseille. Its cards are intriguing and moving, but they never surrender their intrinsic secret. One of them inspired me to write Arcanum 17.‘

Trusting the poet’s word, Alejandro set about studying all he could about the Tarot. He eventually came to the conclusion that it is a sacred work, thus, by essence, perfect. The disciple should adopt it as it is, without attempting to add or subtract anything whatsoever. To integrate it into one’s life, beyond memorizing it, you have to perform actions that rational minds would no doubt consider childish. For example, you can sleep every night with a different card under your pillow, or spend an entire day with one of them in your pocket, rub your body with the cards, speak their names, imagine the rhythm and tone of each of their voices, visualize each figure naked, or complete the drawings that seem to vanish in the frame.

It took forty years of assiduous and loving study for Alejandro to complete his work with the Tarot. It was only then that he met the two people who would become his main allies in the restoration of the Tarot and the writing of this book.

First came the encounter with Philippe Camoin in 1994. Philippe was the last heir of the card makers of Marseille, and they both decided that they would restore the Tarot as close as possible to its original form. The difficulty of this work resided in the fact that the Tarot of Marseille is made up of symbols that are closely intertwined and connected to one another – if a single line is altered, the entire work is adulterated. A large number of printers of the Tarot of Marseille existed during the seventeenth century. Eighteenth-century Tarot decks were copies of the earlier ones. Where as the original drawings were hand-painted, the number of colours the industrial machines used by eighteenth-century printers could produce was limited. Depending on the printer, the lines and colours were reproduced with more or less fidelity. Those who were not initiates simplified the symbols tremendously. Those copying them added errors to errors.

On the other hand, Alejandro and Philippe observed that some of the Tarots have identical and superimposable drawings, and yet each contains symbols that do not appear on the others. They deduced that they must have been copied from the same Tarot, an older version that was now missing. It was this original Tarot that they intended to restore. All the museums lent them the original cards, wooden moulds and presses. Little by little, they began to restore most of the original shapes and symbols. But an apparently insurmountable problem remained: no museum owned a Tarot of Marseille that was complete, ancient, and hand-painted.

Alejandro then remembered that on the Plaza Rio de Janerio in Mexico City, the antiquarian Raul Kampfer, a specialist in Aztec and Mayan relics, had once tried to sell him an old hand-painted “French Tarot”. The price was unaffordable: ten thousand dollars in 1960. Almost miraculously, when they arrived in Mexico, they found the old deck still intact in the late Raul Kampfer’s shop, where his son, unaware of the treasure he kept in a cardboard box, agreed to sell it a reasonable price. This Tarot served as the essential guide for restoring the former colours by computer.

Mean while, just a hundred yards away from Alejandro’s house in Paris, lived a young woman named Marianne Costa. Her relationship with the cards had been pretty intense since the day she found a bunch of them left on her doormat. She had also kept a record of the cards, as they seemed to form a series of numbers which, her intuition told her, must have some secret meaning. Ironically, the first time she met Alejandro, at one of his weekly free card readings in a parisian café, was the same day that he began using the new deck. Marianne became his student and then his collaborator, and ultimately found out that the series of numbers the cards had suggested to her ten years previously was actually Alejandro’s telephone number!

Even if it is difficult for the rational mind to accept that nothing in nature is accidental, that everything that happens in the universe is caused by a pre-established law, that certain events are written in the future and that the effect precedes the cause, the beginninng of this collaboration seemed like a work of destiny established by an inconceivable being…

Alejandro and Marianne ended up studing and reading the Tarot together, and have now written this book together – therefore fulfilling what was indicated by the Arcana. The whole Tarot is organized around the collaboration of female and male archetypes: The Emperess-Emperor, The High Priestess-Pope, The Moon-Sun. The initiate needs his female complement, and vice versa, for both to attain an understanding guided by Cosmic Consciousness. If the Spiritual Teacher lies in the cards, it is essentially of androgynous nature, both a She and a He: this is the ultimate message of the Tarot.

About the authors: Alejandro Jodorowsky is a filmmaker who made the legendary El Topo and The Holy Mountain. He also is a psychotherapist and author of many books on Tarot and spiritualism, including Psychomagic and The Spiritual Journey of Alejandro Jodorowsky. Marianne Costa has worked with Jodorowsky since 1997, co-teaching workshops on Tarot and family tree-therapy. She is the author of No Woman’s Land. Both authors live in Paris.

Alejandro Jodorowsky & Marianne Costa
The Way of Tarot: The Spiritual Teacher in the Cards
Destiny Books
£23.00, Available from Watkins Books