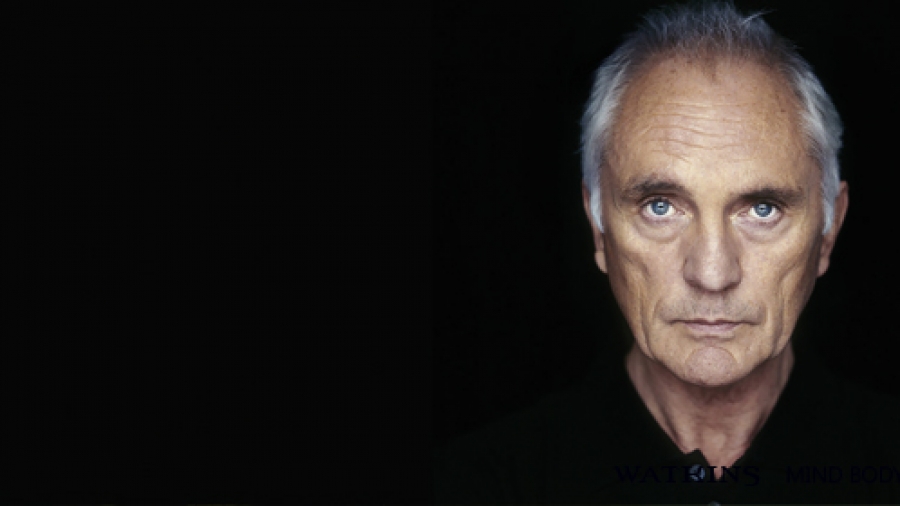 Terence Stamp visited Watkins Books to talk about his twin passions, acting and mysticism, and the relationship the two have to each other for him, through the trajectory of his life.

To be or not to be

Someone was asking about how I understand Shakespeare’s famous line “to be, or not to be: that is the question”. Well I always assumed – using the rest of Hamlet’s soliloquy – what Shakespeare is talking about is that you can either be present, or either be absent and specifically it is the unobserved movement of thought that is absence, and the opposite of that is presence or being. And I think that one’s true self is that part of oneself that knows itself to exist, that which is conscious of itself. So we all have that. It’s just that we don’t pay attention to it. Because the outward life is so fascinating, isn’t it? You can go a whole day without remembering that something [Terence points back to himself] is looking.

Essential advice on acting
Prior to my first film Billy Budd I was introduced to the actor and songwriter Anthony Newley, who was one of my long-term heroes, because he was a working class kid who worked his way through kids’ drama school and had been discovered by David Lean. He was a kind of genius, really. Wondering about my first
casting in a movie I asked him “What to do?” There was a long silence. I assumed Newley, being the hyper-sensitive creative artist, was giving my question the full attention of his considerable knowledge. Finally, he said: “If in doubt, do nothing.”

Working on my first movie
So I started working on Billy Budd and I was getting along fine, but at the end of the script is this scene where Billy who is like an angel is about to be hung, unjustly. And the men on the ship are on the point of mutiny. And it says in the script “There is an air of peace about Billy that quietens the men’s protests”. And I thought “How am I gonna to do that? How could one convey serenity?” And all through the location I am worried about this scene. And I’m still a bit of a Method actor, you know, thinking about emotional memory and going back in my mind to recall a particular peaceful time, but I can’t think of anything to do for this scene. So on the day of the shoot I still haven’t come up with anything. So I simply have to do what Newley suggested, I’ll have to do nothing. I can’t tell you how frightening this situation is for a performer. In many ways it frightened me the most: to trust enough to do nothing.

Discovering the Empty Head
So I step up to the mark, and I remember thinking: Well, Newley, here we go! I close my eyes and feel the sun on my face, a gentle sea breeze … When thoughts come into my head I just let them go and I’m waiting. A little tune comes into my head and I think: Oh god, I’ve got to be empty headed! And then I realize that it is the song my granny used to sing to me when I was eleven. I used to go to her house to do my homework, and she would be in her scullery making me a marmalade sandwich and singing softly ‘Little Dolly Daydream, Pride of Idaho’. As I heard the refrain, my being began vibrating to another music. I was experiencing a previously unknown joy. Somehow not mine yet within me. Out of this song came this incredibly tender feeling, an amazing kind of peace. And I remember turning my look to the men.
What happened to me during that take was my first step into a new standpoint that would change the direction of my life. As the song vibrated through me, I became aware of a subtle shift in my feelings. There was never a question whether it was appropriate. Now I knew it was right. I never spoke to anyone about it, because it was too personal in a way, it was private. But at the premiere everybody burst into tears. And ‘Empty Head’ became my mantra.
Sometimes when I pondered on it I realised it was in me but not of me, in the sense that I could not summon it, it was outside my control. It somehow repesented the best in me yet I looked on it as an ever-strange otherness.
And for 35 years it only ever happened between ‘Action’ and ‘Cut’. I only knew it was there somewhere, but it is not mine to command.
It starts with the empty head. It is empty, but it is aware. Out of the stillness of the presence comes a movement that is not the movement of thought. It is a movement of some sort of deep, deep feeling.

Italian Adventures: Fellini and Pasolini
Meeting Fellini was a very interesting moment in my life, because I really view my career, and I view my life really, as before and after Fellini. Being cast by him, that he actually wanted me in the part of Tobi Dammit, was the greatest compliment an actor like myself could get. So that was wonderful.
However, from the age of about twelve I was in love with a chick called Silvana Mangano. I saw her in a film called Bitter Rice and I fancied her like to death, you know. And during one of my strolls around Rome I walk down the Spanish Steps and into the Via Condotte, and I see coming towards me Piero Tosi who is Fellini’s costume designer, and at the time was considered to be the greatest designer in the world. He is with another guy who turned out to be his boyfriend Roberto Coppa, and this woman. And when they got closer I felt I was going to pass out because she was none other than the Bitter Rice heroine of my dreams, Silvana Mangano, in the flesh. They got close and Piero went: “Oh, Silvana, this is my friend Terence …” And she says to him in Italian “Wouldn’t he be wonderful in Piero Paulo’s film?” And she looked at me and realized that I didn’t speak Italian, and she asked in perfect English: “Do you know Pasolini?” And I said “No, I know who he is, but I don’t know him personally.” And she said “Well, he is making his next film. It’s called Teorema and you would be wonderful in it.” And I heard myself saying, or rather drooling, “Are you in it?” Then I saw the smile for the first time, as if the question had unexpectedly amused her. “Si, si”.
As a result of this wonderful moment in Via Condotti, Pier Paolo and his producer Franco Rosselini, the nephew of Roberto Rosselini, came to London to talk to me.

Terence Stamp memoir – The Ocean fell Into The Drop – is out now.