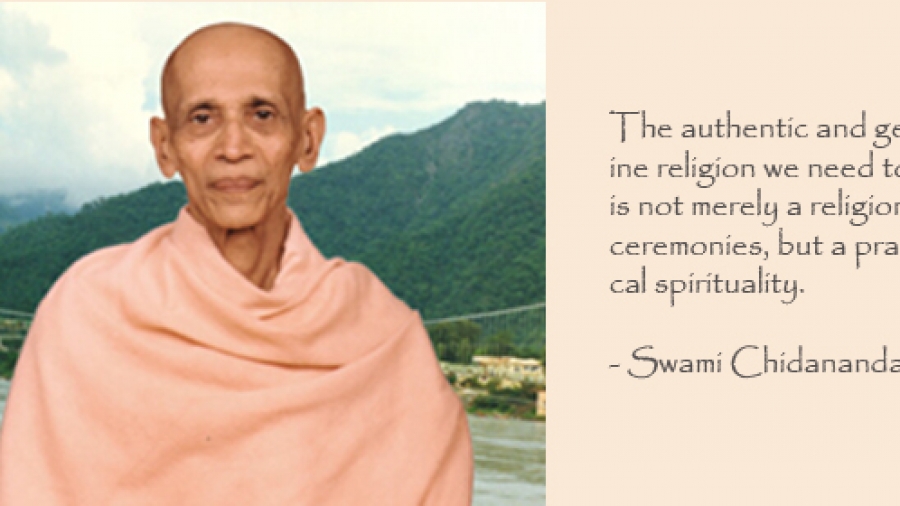 by Watkins Books
with no comment
Yoga and Meditation
0

“[dropcap]T[/dropcap]he authentic and genuine religion we need today is not merely a religion of ceremonies and sacraments, but a practical spirituality – living in such a way as to express the god within us in our daily lives. Our religion should come out of the confines of the temple or church or mosque. It should be a religion that is practiced in our homes, in the marketplaces, in our neighborhood and in our professional field. That indeed is the religion we need today: the practice of spirituality. Otherwise, our world has no hope for improvement through its religions and its religious leaders. Only when true religion fills us from the top of our heads to the tip of our toenails and become part and parcel of the living of our lives, then alone can this world be a place where to live would be a joy, to live would be to love.” – This message was delivered by Swami Chidananda, the former president of the international Divine life Society at The Parliament of The World’s Religions, Chicago in 1993, in marking the memory of centenary of swami Vivekananda’s world famous historic speech  in 1893 in Parliament of World Religions, Chicago

Swami Chidananda was born on 24th September 1916 in Mangalore to Srinivasa Rao and Sarojini as the second among the five children and the eldest son of the family. His pre-monastic name was Sridhar Rao. During his childhood days his spiritual life was shaped by Sri Anantayya, his grandfather’s friend and Krishna Rao, his maternal uncle. In the later stage Sridhar’s spiritual life was much more influenced by Ramakrishna Paramahansa, Swami Vivekananda, Ramana Maharshi, Papa Ramadas and Swami Sivananda. 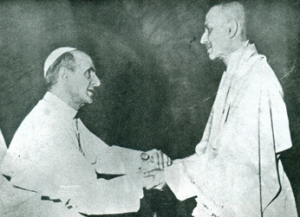 At the Vatican with Pope Paul VI

Sridhar Rao’s elementary education began at Mangalore. In 1932, he joined the Muthiah Chetty School in Madras, where he distinguished himself as a brilliant student. His cheerful personality, exemplary conduct, and extraordinary traits earned for him a distinct place in the hearts of all teachers and students who came into his contact. In 1936, he was admitted to Loyola College, whose portals admit only the most brilliant of students. In 1938, he emerged with the degree of Bachelor of Arts. His career in Loyala College in Madras provided him ample opportunity to understand Lord Jesus and assimilate the essential teachings of Christianity.

Though born in a wealthy family, in the early age, he shunned the pleasures of the world to devote himself to seclusion and contemplation. While he was at college, text-books had to take second place to spiritual books. The works of Ramakrishna Paramahansa, Swami Vivekananda, and Swami Sivananda took precedence over all others.

In June 1936, he left his home without informing anyone in the family. After a vigorous search by his parents, he was found in the secluded Ashram of a holy sage some miles from the sacred mountain shrine Tirupati. He returned home after some persuasion. This temporary separation was but a preparation for the final parting from the world of attachments to family and friends.

Ultimately in 1943 he decided to lead a life of complete renunciation. He was already in correspondence with Swami Sivananda Saraswati. He obtained Swami Sivananda’s permission to join the Sivananda Ashram. On arriving at the Ashram, he naturally took charge of the dispensary. He became the man with the healing hand. The growing reputation of his divine healing hand attracted a rush of patients to the Sivananda Charitable Dispensary. He was well known as Doctor Rao ji. Very soon after joining the Ashram, he gave ample evidence of the brilliance of his intellect. He delivered lectures, wrote articles for magazines and gave spiritual instructions to the visitors. When the Yoga-Vedanta Forest University (now known as the Yoga-Vedanta Forest Academy) was established in 1948, Sivananda paid him a fitting tribute by appointing him Vice-Chancellor and Professor of Raja Yoga. During his first year he inspired the students with his brilliant exposition of Maharishi Patanjali’s Yoga-Sutras. 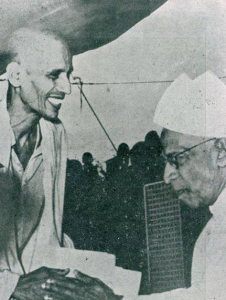 It was also in the first year of his stay at the Ashram that he wrote ‘Light Fountain’, an immortal biography of his Guru Sivananda. Sivananda once remarked: “Sivananda will pass away, but ‘Light Fountain’ will live”. In addition to his multifarious activities and intense Sadhana, he founded, under the guidance of Sivananda, the Yoga Museum in 1947, in which the entire philosophy of Vedanta and all the processes of Yoga Sadhana are depicted in the form of pictures and illustrations.

In 1948, Swami Sivananda nominated Sridhar Rao as the General Secretary of The Divine Life Society. The great responsibility of the organization fell on his shoulders. From that very moment he spiritualized all his activities by his presence, counsel and wise leadership. He exhorted all to raise their consciousness to the level of the Divine.

On 10th of July, Guru Poornima, he was initiated into the holy order of Sannyasa by Swami Sivananda. He now became known as Swami Chidananda, a name which connotes: “one who is Consciousness and Bliss”

In November 1959 Swami Chidananda embarked on an extensive tour of America, being sent by Gurudev as his personal representative to broadcast the message of Divine Life. He returned in March 1962.

In August 1963, after the Mahasamadhi of the Master Swami Sivananda, he was elected as President of the Divine Life Society. After election, he strove to hold aloft the banner of renunciation, dedicated service, love and spiritual idealism, not only within the set-up of the widespread organization of the Society, but in the hearts of countless seekers throughout the world, who were all too eager to seek his advice, help and guidance.

During this period Swami Chidananda Saraswati toured extensively the length and breadth of India, Malaysia and South Africa to serve the devotees of the Society.

In 1968, Swami Chidananda undertook the Global Tour at the request of numerous disciples and devotees of Sivananda, and visited all countries of the world. Wherever he went, devotees received him cordially, and listened to him with rapt attention

Right from the beginning worked and served the cause of Sivananda’s mission tirelessly, and to spread his Divine Life message far and wide, not only in Bharatavarsha (India) but also all over the world. Over all others achievements – Harmony, unity and the faith in infinite paths to reach God are the basis of the religion of Swami Chidananda. His aim was to get all closer to God, irrespective of what name one uses. In this prospective, Swami Chidananda became a leader in several international, inter-faith conferences and parliaments, world peace summits etc. Swam Chidananda received several national and international awards for his role as spiritual leader as well as for his unparalleled humanitarian work.

Swami Chidananda has devotees and followers all over the world. All his life he lived and served tirelessly for his Gurudev’s mission. Now-a-days all talk of Unity of Religions and Universal brotherhood. However, if someone visits the Mosque constructed by The Divine Life Society and offered to the Muslim community in the village of Goda at Rajapur in the district of Jagatsinghpur in Odisha will understand and realize that what Swami Chidananda preached that alone he practiced in his life. Whether it is the earthquake in Uttarkashi, or Super-cyclone or draught in Odisha or Tidal wave devastation in Andhra Pradesh or Tsunami in Tamilnadu Swami Chidananda is the first one to reach the suffering people with all necessary helping hand and service team. He has contributed a lot to the health and education. Swami Sivananda Centenary Charitable Hospital in Pattamadai, in the district of Tirunelveli of Tamilnadu, Leprosy coloney and Leprosy Relief support in Uttarakhand and Odisha and Swami Sivananda Sivananda Centenary Boys high school in Khandagiri, Bhubaneswar,  – are the outstanding legacy.

Swami Chidananda Saraswati wrote many books including and here are listed few. Seek the Beyond, An Instrument of thy Peace, Bhaja Govindam, Awake, Realise your Divinity, Bliss is Within, New Beginning, Message of Swami Chidananda to Mankind, Light on the Yoga Way of Life, Verses Addressed to the Mind, Practical Guide to Yoga, Ultimate Journey, Guide to Noble Living, Ponder These Truths, Lectures on Raja Yoga, Path Beyond Sorrow, Philosophy, Psychology and Practice of Yoga, Path to Blessedness, The Role of Celibacy in Spiritual Life, Liberation is Possible, The Truth That Liberates, Ultimate Journey, Twenty Important Spiritual Instructions, Guide Lines to Illumination and a number of other books.

Looking into the present world crisis Swami Chidananda gives a clarion call to all religion heads and spiritual leaders of the world – “The philosophers, mystics and men of good-will of the world with their spiritual insight must come to the rescue now. Their word endowed with the authority of their inner communion with God alone can save the world from the worst calamity. Not an individual Prophet but a united body of the world philosophers & mystics alone can solve the present day problems of the world & give proper lead to those that govern nations, their business and social lives”

Leaving his numerous followers and devotees Swami Chidananda left his mortal coil on 28th of August 2008 in Shanti Niwas, Dehradun and as per his wish the physical body was immersed in the holy Ganges (Jal Samadhi) in Rishikesh.

The epitome of humility and service, icon of compassion, Vedanta personified, saint, sage and god-man ever the world has seen; is no more with us in his physical form, but he is forever enshrined in the hearts of all of us. His thundering voice “Radiant Immortal Atman! Awake! Arise ! Attain Divinity” will always remind us to move forward, onward & Godward. Swami Chidananda’s contribution to the renewal of the modern world; in uplifting the poor & downtrodden, in serving God in man, in spiritual regeneration, in mass-awakening, in global inter-faith religious unity; will be written in the annals of humanity for as long as this planet exists. Until his last breath, filled with love, humility and compassion; he served as the servant of all living beings including creatures and plants. May we follow his footprints and draw inspiration to live a life of truthfulness, purity, kindness, compassion, humility, love for each other and service to mankind.