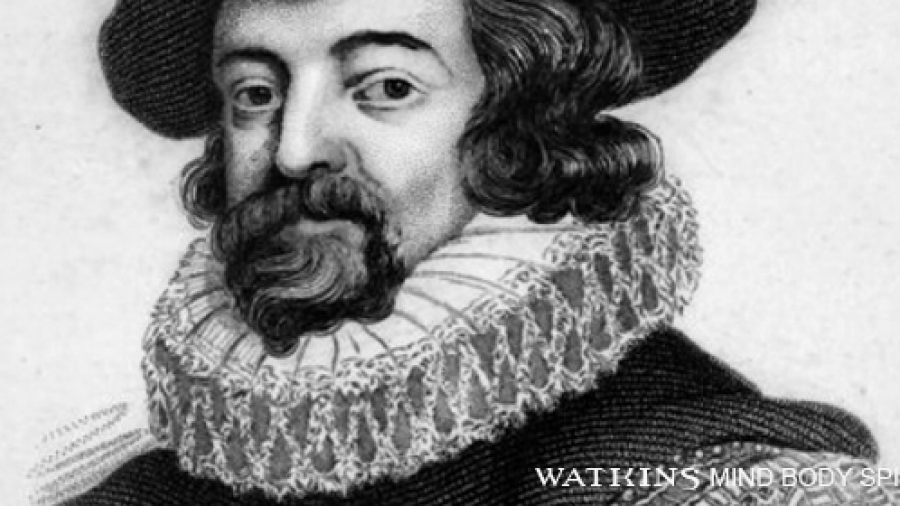 [dropcap]T[/dropcap]he legacy left by Elizabethan genius Sir Francis Bacon is one that is shrouded in mystery, speculation and controversy, a story which has been unravelling and unfolding up to the present day. Yet the myths and legends surrounding this multi-faceted and multi-talented individual continue to endure, and appear to be deepening over time.  Many writers, commentators and would-be code-breakers have pieced together various aspects of what amounts to an intriguing jigsaw puzzle, but are we any the wiser in coming to a greater understanding of this complex man?

The View Beyond was compiled primarily to mark the 450th anniversary of Bacon’s birth on 22 January 1561, and published by Polair Publishing.  The format remained the same as that used for The View, previously launched in May 2009 to celebrate the 150th birth anniversary of Sherlock Holmes’ creator Sir Arthur Conan Doyle. Both volumes have chapters contributed by over 20 writers.

Opening strongly with global thinker Ervin Laszlo and Prologues by actor-director Mark Rylance and Rose Elliot, vegetarian cookery writer, The View Beyond follows with an overview of Bacon’s life’s work, as contained in his philosophical and scientific six-step plan for “The Great Instauration”(instauration means repair, renewal, restoration), eloquently described by Peter Dawkins, Founder-Director of the Francis Bacon Research Trust.  Professor John Henry then expands on this theme by reviewing Bacon’s exoteric and esoteric philosophies of nature.

[span3][margin_5t]The myths and legends surrounding this multi-faceted and multi-talented individual continue to endure, and appear to be deepening over time.[/span3]Nick Lambert explores Bacon’s vision as set down in his posthumously-published The New Atlantis (1627), which sets down his utopian vision for what was to become the United States of America. A big question is how Bacon’s vision for a scientific revolution designed to benefit everyone squares with the current situation in the USA and Western Europe where we have a financially motivated science operating for the benefit of the few banking and major corporate vested interests.  Perhaps the greed and corruption now being exposed in the banking sector and the media are the first tangible signs that we are indeed witnessing the end of materialism.  Time will tell.

A scholarly approach to The Sons of Francis by Colum Hayward explores the immediate legacy of Bacon’s immense work amongst his friends and colleagues during the decades following Bacon’s death in 1626.

The book then veers towards the esoteric aspects of Bacon’s work with an impressive overview of his work by Baconian scholar James North, who examines Bacon’s Great Instauration and his associated works from the perspective of the Ancient Wisdom, and the impact of the Renaissance, the Rosicrucian enlightenment, the Theosophical influence and the context of the later Anthroposophical leanings of Rudolf Steiner.  Phillip Lindsay gives a further esoteric perspective by exploring Bacon’s reincarnational identities as an Ascended Master, in a lineage which includes Roger Bacon, Master Rakoczi and the Count Saint-Germain, the “Wonderman of Europe”.

In a chapter which links The View Beyond with the The View, a reprinted essay by White Eagle Lodge founder Grace Cooke features the Master R in the context of the work of the White Brotherhood.

A section on Theosophy and Rudolf Steiner explores these later esoteric developments from a Baconian standpoint, with contributions by John Waterman, Sylvia Francke and Tim Wyatt.

Mark Finnan then leads the direction of the book into the world of Mystery and Cipher in his narration of the tale of the Oak Island mystery, reckoned to be the longest treasure hunt on record since its beginnings in 1795, regarding treasure potentially associated with Bacon hidden away on a small island off the coast of Nova Scotia in Canada. My own chapter, written in collaboration with Mark Harris, leader of our local dowsing group in the Highlands of Scotland, used dowsing and associated techniques to further investigate the Oak Island story and a similarly intriguing location at Bruton Vault in the Virginian town of Williamsburg – with surprising results!

Chairman of the Francis Bacon Society Peter Welsford wraps up this section of the book by looking at Codes, Coding and Synchronicity, which includes the recent decoding of the Shugborough Hall Monument by Canadian researcher Buff Parry.

In tune with the book’s subtitle – Sir Francis Bacon: Alchemy, Science, Mystery – the next section focuses on Alchemy and Science, dealing with harmonic frameworks, psychical research and that elusive substance, the aether. The book rounds off with an optimistic look forward to the coming of a Golden Age, aligned with Bacon’s visionary impulses as contained in The New Atlantis.  Kathleen Pepper examines what a Golden Age might look like in practical terms and this theme is investigated in more depth by Steve Nation, now in New York and well-known in England from his long involvement with the Lucis Trust.

Icelandic activist MP and leader of her country’s Movement Party, Birgitta Jonsdottir, demonstrates what needs to happen to open the doors to a Golden Age and a fairer democratic process of government in her far-reaching contribution Transformation of Politics, which I believe resonates strongly with Bacon’s conception of a modern society.

The debate about Bacon’s influence seems likely to continue for the foreseeable future, with perennial questions about the true authorship of the Shakespeare plays and whether or not Bacon was the illegitimate son of Elizabeth I still provoking conflicting views.  In the meantime The View Beyond provides a stimulating synthesis which captures the essence of Bacon’s contribution to our developing world.