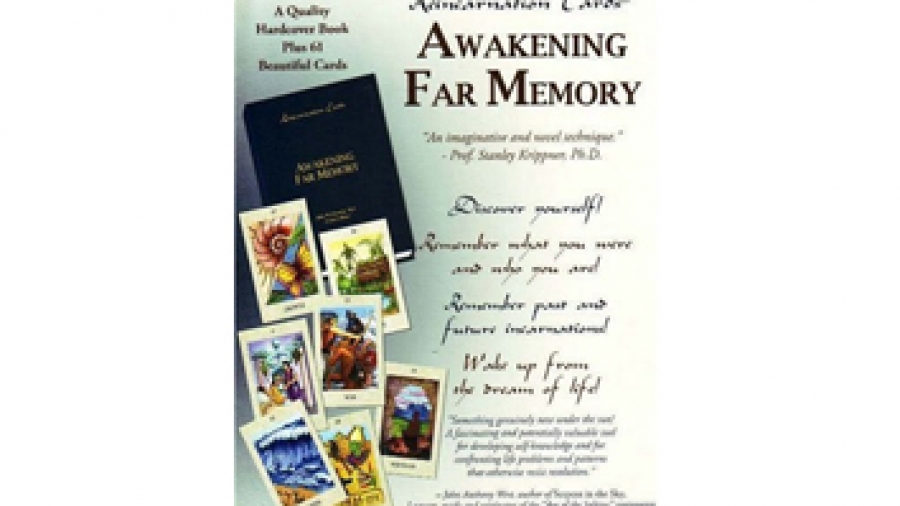 Taken seriously or just treated as a fun game, this deck encourages you to dream and imagine who or what you may have once been.  Alongside the hardback guide-book, the 61 cards are split into five colourful and cheery suits – occupation, culture, environment, theme and termination.

Doing a reading with this deck can reframe one’s curious impulses and magnetism to certain times and places; those haunting moments in foreign climes when you feel you’ve been somewhere before (when you haven’t).  A reading can contextualise one’s established identity – your current sense of being fixed on a particular nationality, gender, job, society, ethnicity or even era – to become part of a larger set of individual narratives, of possible journeys through this world, seen at different times.

This deck has an epochal card suit that denotes the time period in which your antecedent life occurred- from Prehistoric (early hominid existence; African rift valley lifetimes) to Protohistoric (Lemuria, Atlantis, Hyborian tribes or around the Thurian continent), throughout the course of human history-  including cards for indigenous societies, the Fertile Crescent civilizations, Greco-Roman classical antiquity, the Indus valley, Central Asia, Pre-Columbian worlds – even (future?) extra-terrestrial!

The diversity of ‘occupations’ suit gives another fine-grain layer to your incarnation – (indicating jobs in government, upholding or breaking laws, ‘entertaining’, bringing up children, teaching, subsistence in the fields, tending temples, hauling bricks & stones etc.) – a spectrum of vocational lifetimes.  Also this somewhat helps avoid the classic ‘famous personage’ reincarnation fantasies (like being Cleopatra/Alexander the Great/Napoleon/Marilyn Monroe and so forth).

The ‘environments’ suit of cards deals with the zones in which you may have previously spent your days and nights surviving – down elder streets, along river edges, out in the fields or persevering up mountains.

The final ‘termination’ suit shows how it all ended for you- sometimes you unexpectedly, abruptly & unpleasantly shuffle off the mortal coil.  After a reading, following the clues in the cards can lead to some interesting Wikipedia stubs & speculations.

Used as either a tool for visualization or whimsy, you could expand the deck and add new cards to or reconfigure the deck’s designs to fit your own intuition, tastes or particular practice.   You also could use this deck to look into particular relationships, creating spreads for loved & hated ones you have today and see what happened ‘last time’…  Cause festive arguments between your family & friends as you compare the patterns of behaviour and find unexpected reflections and synchronicities.  You don’t have to believe in reincarnation to enjoy all these permutations of ‘what if’.