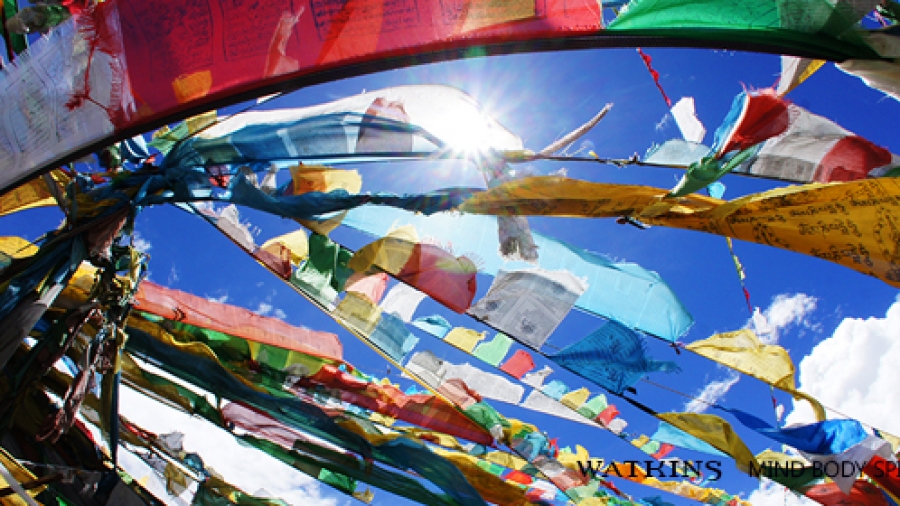 The nature of Dzogchen, the Great Perfection, is perhaps best understood as the essence of all nondual mystical aspiration. Within the Tibetan context, it lies at the heart of shamanism, Bon, and Buddhism.

Taking its cultural and linguistic references from Bon and Buddhism, it may appear to be limited to those traditions, but to see its existential reality restricted to that cultural frame would contradict the Tibetan precepts that define it as utterly nonspecific and unconfined. Historically Buddhism provided the ground in which the precepts of the Great Perfection appeared, and certainly it still provides a rich and wonderful metaphysical field of reference. But the principles of radical Dzogchen are appropriate to every religious and cultural context. All religion and culture is transcended by its formless essence. It subsumes science and humanism today as it once incorporated shamanism and theism. It supersedes religion by shunning dogma and doctrine. It surpasses yoga and meditation by disavowing technique.

It transcends the creativity of the human mind—whether as science or art—through identity with our intrinsic nature. Inclusivity defines the Great Perfection.

As mystical endeavor the quest for natural perfection may have continued for as long as human history. Surely it is hidden in the mysteries of Babylon and Egypt, Greece and Rome, in Indian tantra, the Chinese Tao, Muslim Sufism, and in the Jewish Torah and the Christian heresies of the Albigensians, the Knights Templar, and the Alchemists, if only because natural perfection is inherent in human being and cannot be suppressed. Deprived of a lineal tradition, guides, and precepts, it may burst out spontaneously as an imperative of the human spirit, as it did in Europe and America in the 1960s. Regardless of the cultural and religious context, the time and the place, the “pathless path” of nondual illumination is always the same because the nature of the mind, being the origin of time and space, is one. It has happened, however, that in the twenty-first century the exemplars and custodians of this living tradition are the Vajrayana Buddhists of the Tibetan plateau. Nondual mysticism finds its own ground everywhere in the scope of Tibetan Buddhism, particularly in the Kagyu Mahamudra tradition, but it is in its earliest transmission into Tibet, when the tradition of the Ancients (Nyingmapa) was still in its incipient phase, that we find the most pure and unequivocal statement of the principles and poetic effusion of the heart meaning of the Great Perfection. That is what is termed ‘radical Dzogchen’.

Given that the oldest and earliest is not necessarily the best, nevertheless, the quality of pristine freshness reverberates down the centuries from a culture on the verge of breakthrough. This quality may be discerned in eighth-century Tibet and particularly in the work of the mystic and poet Vairotsana of Pagor, who at that time wrote down the five poems presented in this book. In his work there is a sense of the light of dawn spreading over the landscape to illuminate the darkness. The word of Dzogchen had arrived to illuminate the murk of spiritualistic shamanism, to clarify the Buddhist options presented by India, China, Khotan, Brusha, and Oddiyana, and to exalt the lifestyles of the people of the Tibetan plateau. The freshness and vitality of Vairotsana’s vision, written down when the Tibetan language was as young as English when Shakespeare wrote, still has the power to illuminate, although the shadows that are dispersed today are cast by apocalyptic materialism and consumerism.

The power of Vairotsana’s five original works may lie in the magic of ‘transmission’—for that is how these poems are designated. Vairotsana did not attribute them to himself as the poet but cast them in the mold of revelations of Garab Dorje, the human source of the Dzogchen tradition, because all tantras, transmissions, and precepts of Dzogchen are said to have the same timeless origin. The verses of each of the five transmissions—consisting generally of a quatrain of two slokas, or couplets—can stand apart as didactic gems of Dzogchen expression, sometimes with only tangential connection between them, but they are better viewed as the facets of a crystal globe, each reflecting an aspect of the whole. The content of the transmissions is always the same—a unitary vision of the nature of mind. The nature of mind (where ‘nature’ can only mean ‘essence’) is luminous mind, the one indivisible nondual mind of natural perfection. The holistic product may be personified as the all-good buddha Samantabhadra, who at the same time is the supreme source of the transmission and the transmission itself. The reader, the recipient of the transmission, is identified, thereby, with the all-good Dzogchen vision of the transmission.

The essence of the transmission is simple, direct perception. In the timeless moment of the here and now, there is no space for projection and filtration and no time for evaluation, reflection, and judgment. In this lies natural perfection. Herein lies the secret of nondual reality. When we speak of nondual mysticism, what is indicated is nothing but the clear light intrinsic to everyday perception; yet this perception and this function of awareness bring ultimate resolution to the human condition. All its dichotomies and contradictions are resolved in the unitary light of awareness in itself. If it can be said that conception and action exist, surely there is no gap between the initiation of the act and its actualization. The unitary moment is its own reward. Time and space are resolved in the all-inclusive wholeness of the moment. The quandaries of embodiment are resolved in each moment. The paradox and antinomies of gender are resolved in the unity of the moment. This is transmission of the Great Perfection that does not impose a new, conditional structure upon the mind but reveals what is already, primordially present. It comes by way of confirmation, then, of what has always been known: that the nature of being, the nature of reality, and the nature of mind are immanent as consummate perfection.

There is nothing in this transmission that can be grasped or conceptualized or cultivated or practiced. To assimilate it into the logical intellect and spin it out as a philosophy or doctrine is to nullify its purpose, just as the magic of poetry is lost in analysis. The transmission itself is a timeless event, like every moment of experience, arising as spontaneity, without cause or condition, so it cannot be developed into a yoga or a meditation practice. It cannot be turned into religion: there are no tenets of belief; neither devotion nor faith is a condition of its revelation; and no ritual interprets and structures it. It is simply an existential understanding of the here and now.

Vairotsana’s five transmissions are compositions of deconstructive precept, expressing the Dzogchen vision of the nature of mind. Their primal impact upon a receptive reader may open a door into the vision of the great perfection. The rational mind, however, may concoct objections to such an unreferenced state and its attendant sense of identity loss. It is here that the commentary engages, providing elaboration through causal connection, lulling the intellect with its bromide, while undermining—deconstructing—the structure of the intellect by indicating the natural state of being, the suprarational reality of the great perfection that always lies immanent in the timeless moment. Here, the self-referential language of the tradition points at the unstructured ground of all language, and since this reality lies in an absence of any characteristic, attribute, or function, the Upanishadic method of “not this!” “not that!” is employed. The mystery of the Great Perfection resides in its ineffable nondual reality that is a unity but at the same time a multiplicity. It is at once the source and the creation. It is inconceivable and inexpressible. It is enlightened mind or luminous mind. To reveal all experience as this reality is the purpose of Dzogchen, and the self-evident principles of the Dzogchen Mind Series are the transmission.

About the Author: Keith Dowman has been involved in the arena of Buddhism for more than forty years, living and raising a family in India and Nepal and in Tibetan refugee society. He received lay ordination in the Nyingma school of Tibetan Buddhism and is the author of more than a dozen books on Tibet and Tibetan Buddhism, including Flight of the Garuda, Sky Dancer, and Natural Perfection. He lives in Kathmandu, Nepal. www.keithdowman.net