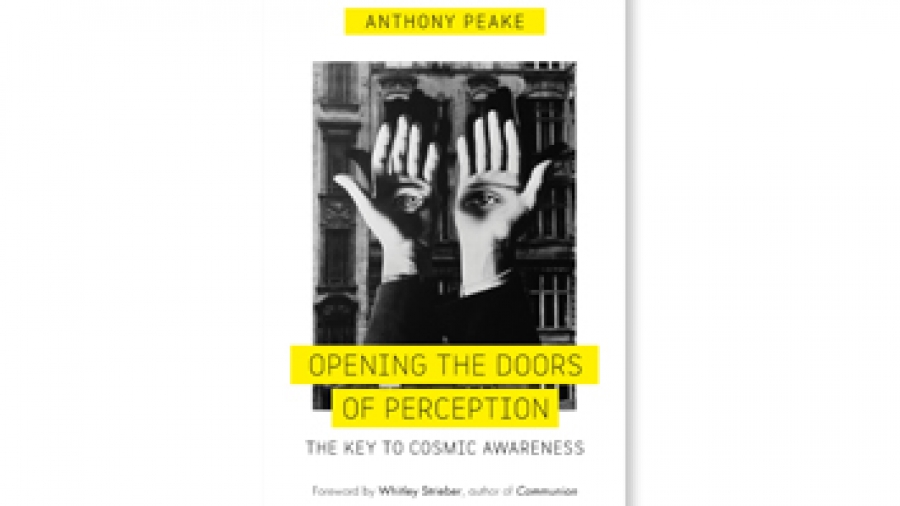 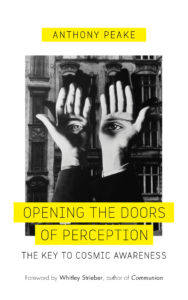 Anthony Peake
Opening the Doors of Perception
£10.99, Pre-Order on Amazon

Anthony Peake is engaged in one of the most important strands of ontological inquiry of modern times, nothing less than unravelling the Gordian knot that is the mystery of our existence. In 2009, his study Is there Life after Death? explored what science can tell us about the process of dying and the more controversial evidence that physical death may not necessarily implicate the entity that comprises our persona. This groundbreaking book was followed by The Daemon (2010), which took an equally radical appraisal of our knowledge of the brain, that enigmatic carnal organ that is the true interface between the body and the mind – the ‘inner’ and ‘outer’ – worlds. In this, Peake made a case for there being two distinct modes of consciousness, mirroring (but not necessarily confined to) the bi-cameral brain. An important effect of this is that time is experience differently in each aspect: one – he dubs the ‘Eidolon’ – is the familiar reactive part of us that deals with everyday life; the other – the ‘Daemon’ – is more difficult to comprehend having aspects that might be called ‘unconscious’ and transcending mundane limitations.

Significantly, Peake argues, the Daemon is the vector for the puzzling experiences of being out-of-the-body (OBE), or of extra-temporal ‘memories’ such as of ESP, past lives, precognition etc. These may mean nothing to the diehard materialist but often seem profound and even life-changing to those that experience them and deserve intelligent study for that aspect alone. Peake’s next two books – The Out-of-Body Experience (2011) and The Labyrinth of Time (2012) – explore, in considerable depth and ingenuity, both OBEs and Near-Death-Experiences (NDEs) and anomalous experiences of time. In fact, his conclusion that our experience of time as a mentally-constructed illusion is in line with the wisdom of ancient sages, but here argued through reason and examples rather than through mystical revelation. The entire argument is rehearsed in Peake’s follow-up – The Immortal Mind (2014) written with fellow researcher Ervin Lazlo – and reinforced with new evidence from the neurological and psychiatric sciences, and in comparing ‘normal’ and pathological conditions and experiences with those we call anomalous.

Time and again we return to the observation that some people have subjective experiences which transcend our familiar understanding of time and space – the sensation that, somehow, a part of us exists outside of time and space. This is the frontier that Peake is scouting and the theme of his latest report. Taking his cue from Aldous Huxley’s own exploration of the nature of consciousness, Peake throws open ‘the doors of perception’ and invites us to drink in the profound vista that reveals to us.

What is important is that Peake is not afraid of tackling some of the most profoundly entrenched ideas about the mind-brain interaction and, in reviewing the current literature on neuroscience and physics, he has indeed found – and more importantly, brought together and considered intelligently – some very interesting lines of inquiry. By this I mean Peake does not claim to have found evidence or proof, but signposts and hints that may turn out to be significant and therefore deserve serious research and investigation.

While physical materialism steadfastly confines that most mysterious and wonderful thing – consciousness – to the brain, the historical wealth of well-documented narrative experience (once fraudulence, delusion, misperception and misunderstanding are eliminated) would have us believe otherwise. Peake extrapolates several important strands of scientific research : that consciousness may be a distributed function (a biological equivalent of the computing technique), that the physical nature of ‘reality’ at the quantum level seems to have holographic aspects or behave like a hologram, and that the deeper inquiries are made into the building-blocks of the physical world the more the results (or effects) challenge our understanding of the nature of time and space.

The implication of a holographic model of the mind-brain function is very interesting. For me it resembles the Daoist depiction of the fundamental potential our existence as an Uncarved Block, pregnant with myriad forms awaiting revelation by the sculptor. While the block itself contains near infinite possibilities, the action of sculpting (our interaction with the world) whittles away the potentiality; in this it can be said to be ‘inhibiting’ that potentiality, confining or restricting it to a single ‘fixed’ form. However, the hypothetically ‘infinite’ potential of a newborn’s life does not follow a single linear path as, at each and every micro-moment, it faces a new universe of potential.

Thus, as in physicist Hugh Everrett’s ‘many worlds’ theory, all of us are spinning off myriads of time-lines, the consequences of different choices or actions. In Peake’s model the function of our Eidolon (our person) is to navigate a single route along the branching timeline, this is our immediate experience of daily life. The Daemon, however, is not a part of everyday awareness but that part of us, somehow ‘above’ (separate or Platonic ‘immortal’), that or manages the many branching Eidolons on their many timelines. In this model, each of us can be seen as experiencing many variant lives (possibly simultaneously as sequentially has no meaning in this context); each necessarily unaware of the others, we presume, so that the full potential of ‘reality’ can be experienced in all its variations. Yet, on occasion, an anomalous event or experience will crack open our perceptual doors enough to hint at something far more wonderful than the mundane.

Consciousness, then, is not confined to the brain but is, potentially, everywhere, only limited to the here and now by the brain. We have not one life, but potentially many, limited to the current one only by the immediacy of experiencing and surviving in the here and now. Our perception and experience of time and space can be unlimited, but is limited only by focus on our immediate daily life. This is something mystics and shamans have been telling us throughout the ages and now Anthony Peake and his colleagues are beginning to quantify the process. As Forteans this is crucial to an understanding of both the nature of perception and of ‘normality’, the better to judge what is ‘anomalous’.