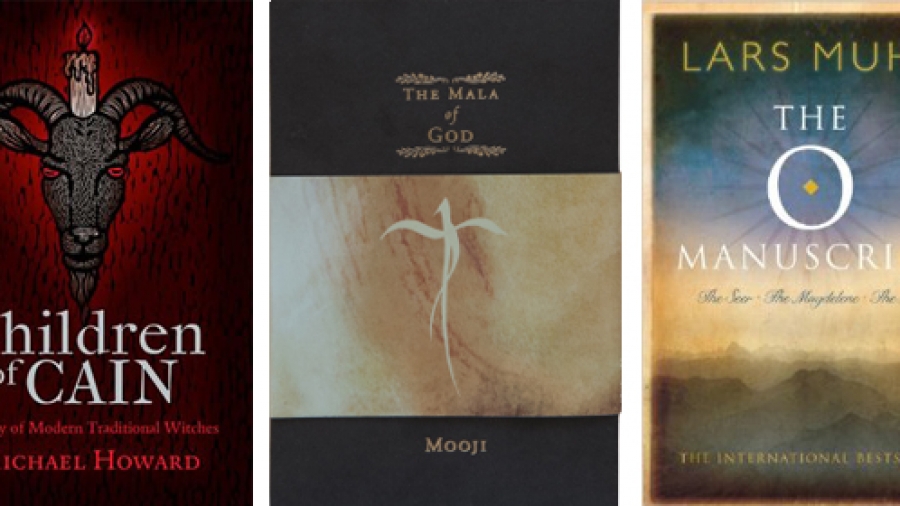 This month’s bestsellers include Michael Howard’s history of Traditional Witchcraft, Lars Muhl manuscript and the inspiring The Mala of God, written by Mooji.

Mooji
The Mala of God
£14.50, Mooji Media
The Mala of God is more than just a book; it is a spiritual gift, an expression of the grace-filled heart brimming with prayer, devotion and gratitude to the Supreme, yet it is imbued with the unsparing clarity and power of non-dual wisdom.

Michael Howard
Children of Cain
£32.99, Three Hands Press
Based on over forty years of research and private collaboration with practitioners, Michael Howard’s Children of Cain is the definitive history of Traditional Witchcraft and its key operatives in Britain and the United States.

Lars Muhl
The O Manuscript
16.99, Watkins Publishing
In the opening scene of The O Manuscript, Lars Muhl is an aging, washed-up rock star who has been lying in bed for three years. Abandoned by doctors and living alone on an island, a friend gives Muhl the phone number of a ‘seer’ in Andalusia. After a single phone call, Muhl is back on his feet and a three-year apprenticeship to the seer ensues. During their time together, the seer challenges Muhl to abandon his old life and initiates him into the mysteries of the Montsegur and the Cathars.

Robert Henderson
Emotion and Healing in the Energy Body: A Handbook of Subtle Energies in Massage and Yoga
£16.99, Inner Traditions Bear and Company
In this comprehensive guide to subtle energy and its associated physical manifestations, Robert Henderson reveals how the discomfort and pain you carry in your physical body is related to the energies of the life you have experienced.

Drew Heriot
The Power of the Heart
19.99, Beyond Words Publishing, DVD
This breathtaking film features the wisdom of Dr. Maya Angelou, Deepak Chopra, Eckhart Tolle, Gary Zukav and the stories of souls transformed by love. Written and Directed by: Drew Heriot