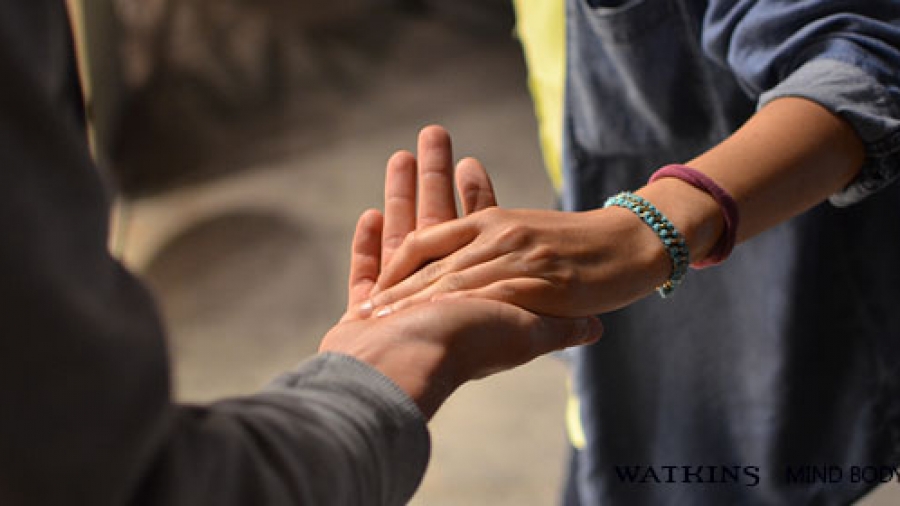 What did the Dalai Lama say to the hot dog vendor?

‘Make me one with everything’.

That’s how I open my new book titled—Make Me One with Everything. It’s a joke, but there’s more to it than that. Becoming ‘one with everything’ by seeing through separateness and rigidity is the heart of what I call inter-meditation. As I write:

It’s time for us to move from me-ditation to we-ditation. We is the new i. Inter-meditation means meditating with—the practice and art of intimate union with whatever is, just as it is. It is the yoga of convergence, connection, co-meditation, and spontaneous oneness. It’s a path we can take to overcome all our illusions of duality. This is the direct way to joy, inner peace and stillness, happiness and contentment. Everything we seek is within, when we look deeper.

Looking deeper means bursting through the illusion of separation, discerning what is authentic and essential. Inter-meditation implies and includes seeing into others as well as ourselves, feeling what they feel, intuiting what they intend, and being moved to interact meaningfully, as one soul to another, and not just at the habitual physical and mental level. Fools seek from afar, while the true path runs beneath our feet, even now. We may feel removed from IT—the Divine, God, the sacred, Buddha, and the inner light—but it is never removed from us. I’ve checked!

When practiced with meditative intent, dance becomes sacred, exercise becomes yoga, good wishes become genuine empathic compassion, and Thanksgiving dinner becomes communion. Inter-meditation is genuine lovemaking—spirits connecting on multiple levels at once, both conscious and unconscious. It’s giving birth, and it’s being truly with someone and there for them as they’re dying. Inter-meditation is how we open to inseparability and mutual oneness, savoring every step along the path we think of as our daily lives.

Here’s one of the many practical, original inter-meditation practices I’ve shared in Make Me One with Everything—I call it Presencing.

This is the secret: letting go means letting things come and go, letting be.

I’m a Buddhist meditation teacher and retreat master. People often tell me they like to meditate, do yoga, chant, and pray, but they don’t have time or space. I tell them that the where and what have little or nothing to do with what contemplative practice actually entails. ‘This is how God prays: by dancing’, wrote the brilliant Benedictine monk David Steindl-Rast. The French philosopher and Christian mystic Simone Weil described prayer as ‘the highest state of attentiveness’ or undivided attention. Similarly, inter-meditation has many different definitions, faces, and aspects. There are as many ways to inter-meditate as there are ways to pray or ways to live.

Whenever I see a body of water, I instinctively relax, dissolving into its movement and flow, sounds, and ripples, or simple it’s stillness—in such short supply today. This non-meditation or natural meditation is the essence of inter- or co-meditation, meditating with nature without doing much at all, while undoing the tiresome habit of overdoing and entering into the natural state of inseparability and unity consciousness. Try it. If I can do it, you can do it. We can all do it—together! We may too often feel far from the sacred zone, but I assure you that it’s never very far from us!

When I get clearer, everything becomes clearer; this is simply how things work. We may not get entirely new eyes, but we do start to see things differently. We can find the purpose and meaning of life in our own lives, and feel at home, fulfilled and complete. The father of Western philosophy, Socrates, famously exhorted: ‘Know thyself’. A thousand years ago, Tibet’s greatest yogi, Milarepa, sang, ‘The ultimate view is to observe one’s mind, steadfastly and with determination’. When the Buddha taught, over twenty-five hundred years ago, that anyone could become enlightened through applying his teachings, he meant it. When we realize who we are, God and the entire world is included—or so the sages of the ages have proclaimed.

In A Dear Treasure for Destined Disciples, presented at the Millennium Summit of the United Nations, in 2000, His Holiness Dudjom Rinpoche said:

Generally speaking, the word ‘meditation’ means sustaining the continuity of awareness with natural and innate mindfulness, resting in lucid undistracted non-fixation, and growing accustomed to the innate nature. If you don’t meditate and familiarize yourself with the inner mind and its workings, you won’t gain certainty. If you do meditate, certainty and conviction will be attained. By meditating with strong diligence, the uptight fixation on solid duality will gradually grow more relaxed. Wisdom will dawn within and you will become more equanimous, serene and centered amid all of life’s inevitable ups and downs.

We can say the same for inter- or co-meditation. It is a way of awakening now and together from the sleep of illusion and delusion, the somnolence of being like a dead-hearted, ambulant zombie stuck in the mire of mindlessness. It is delicious, contemplative practice intent upon the ultimate spiritual goal, or however you might define that: enlightenment, Nirvana, oneness, God-realization, cosmic consciousness, and so on. It’s also been proven—by tradition as well as by modern scientific research—a very healthy and healing, relaxing and therapeutic, sane and wise thing to do and incorporate into one’s life, with or without the religious trappings.

I’ve been meditating with some of the best of them for decades, but sitting like a stone statue in gardens and caves isn’t the point, not really, nor is becoming stiff like a wooden Buddha or indulging in passivity and indifference. Inner freedom, wisdom’s clarity, equanimity, authenticity, and naturalness are so much richer, love-lier, and deeper.

Wait! There’s more to my joke that I want to tell you. After His Holiness said, ‘Make me one with everything’, the hot dog vendor immediately started doing his thing, and then he handed the hot dog over to the lama, laden with all the trimmings—mustard, ketchup, relish, onions, sauerkraut. The lama gave him a $20 dollar bill, which the vendor accepted and then went about his business, wiping down the ketchup dispensers and salt and pepper shakers, toasting buns, putting more hotdogs on the grill….

The Dalai Lama just stood there for a while holding his hotdog. Maybe he was meditating? Or was it some kind of stare-down?

Finally, he asked, ‘No change?’

The vendor replied, ‘Change comes from within’.

Change is the only thing that is consistent. Don’t we wish to genuinely change our lives and this world, for the better? So many of us say we want to change, and for the better. Yet, who among us is genuinely ready, willing, and able to change? How to make a quantum leap and not just settle for small incremental, gradual improvement?

My answer, again, is inter-meditation. Seeing through oneself is seeing Buddha and being Buddha, seeing God and being God. At least for an instant… but that moment of total awareness is one moment of genuine freedom and enlightenment. Oh, the exquisite joy of shared spirituality, of consciously awakening and aware-ing together, two as One and inseparable! Let’s dive into the flow! Join the we-volution, from me-ditation to we-ditation. We need each other to become enlightened and create a better world and sustainable future. We are far more Buddha-like than we think.

About the author: Lama Surya Das is one of the most learned and highly trained American-born lamas in the Tibetan Dzogchen tradition. He is the founder of the Dzogchen Foundation and the author of many books, including Awakening the Buddha Within and Awakening to the Sacred.

Lama Surya Das
Make Me One With Everything: Buddhist Meditations to Awaken from the Illusion of Separation
£14.99, available from Watkins Books