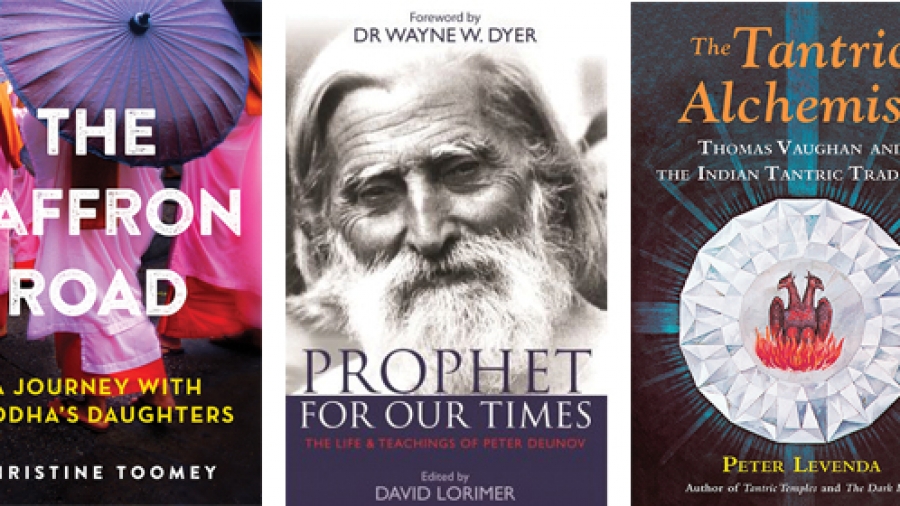 by Watkins Books
with 2 comments
Bookshelf

With the new Watkins Mind Body Spirit, issue 45, a selection of new titles landed on our shelves. Watkins staff hand picked three of them, and these include Christine Toomey’s odyssey on the discovery of buddhism as told by contemporary women; the inspiring life and teachings of Peter Deunov and the secret mysteries behind the death of Welsh alchemist Thomas Vaughan, his partner and their experiments with psycho-sexual techniques at the root of both Tantra and Alchemy. Discover more, visiting our bookshop.

Christine Toomey
The Saffron Road: A Journey with Buddha’s Daughters
£14.99, Portobello Books
A meeting with a Buddhist nun inspired Toomey to go on a 60,000-mile odyssey to learn more about the contemporary women choosing to become part of a long tradition of female spirituality that stretches back through the centuries and now embraces the possibility that the next Dalai Lama could be female. Combining travelogue, history, and interviews, The Saffron Road opens the door to a rarely glimpsed world of ritual, discipline and enlightenment.

Edited by David Lorimer (Foreword by Dr Wayne Dyer)
Prophet For Our Times: The Life & Teachings of Peter Deunov
£12.99, Hay House
Peter Deunov was a great and inspired teacher of the Perennial Wisdom, that essential thread of truth running through all the major world religions. His teachings are both direct and clear, and will speak to everybody whatever their creed. Essentially they give a prescription for living in harmony with others, with the Earth and with the Divine. “The whole world bows down before me; I bow down before the Master Peter Deunov.” – Albert Einstein

Peter Levenda
The Tantric Alchemist: Thomas Vaughan and the Indian Tantric Tradition
£30.00, Ibis Press
In the seventeenth century the Welsh alchemist Thomas Vaughan, and his wife and alchemical partner Rebecca, died under mysterious circumstances.  What they were doing and how it might have led to their deaths has remained a secret – even though the true nature of their experiments is described in code in Vaughan’s published works. Readers will find that the many disparate threads of an authentic spiritual tradition are woven together here in a startling tapestry that reveals the psycho-sexual technique at the root of both Tantra and Alchemy:  that is to say, of both Asian and European forms of esoteric praxis. The Tantric Alchemist is a work on Alchemy as decoded by Tantra… and a work on Tantra as understood by Alchemists.