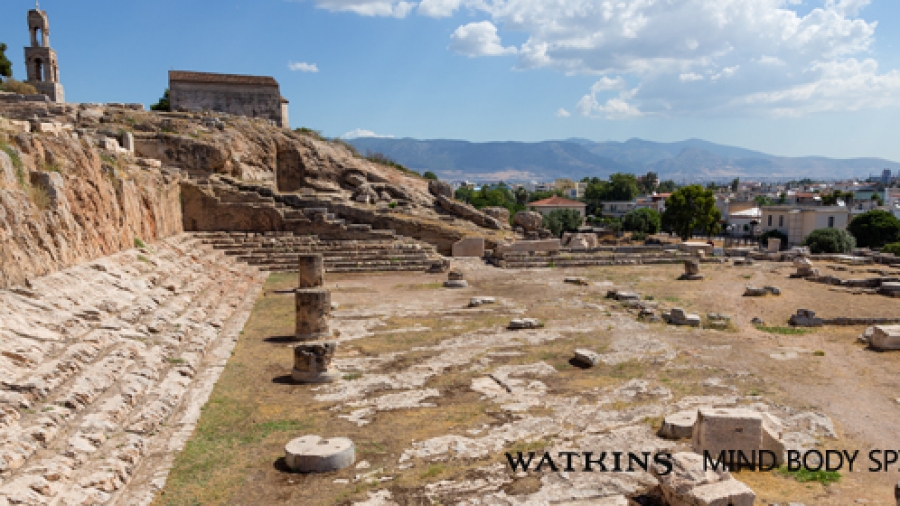 I reached the boundary of death, and set foot on threshold of Proserpina, and then I returned, carried through all the elements; in the middle of the night I saw the sun blazing with bright light; I approached the gods below and the gods above face to face, and worshipped them from nearby.

[dropcap]T[/dropcap]hese are the words used by Lucius, the hero of Apuleius’ novel The Golden Ass, to describe the experience of his initiation into the mysteries of Isis, and they are for me the best description we have of what it was like to be part of an ancient mystery cult. Mystery cults were a feature of the ancient Mediterranean world from around 700 BC until the changed social climate in the years after AD 400 saw the sanctuaries and meeting-places abandoned or closed down. Before that happened the expanding Roman empire had brought such cults as far as Britain. Along Hadrian’s Wall, groups of Roman legionaries would gather in Mithraea, small cave-like chapels, to discover their true place in the cosmos, and similar meetings would have taken place across the Empire, from the Tyne to the Euphrates. In parts of Anatolia and Greece and Italy, bands of women would go out onto the mountains with flutes and tambourines to dance in honour of Dionysus or the Mother of the Gods, and to meet those gods in their own terrain. And in ancient sanctuaries in Athens and Samothrace and elsewhere, groups of initiates would purify themselves, fast, and in nocturnal rituals have communion with the Great Goddesses or Gods. Crinagoras, a poet, wrote after experiencing initiation into the Eleusinian Mysteries in Athens:

Even if yours has always been a sedentary life, and you have never sailed the sea, nor walked the roads of the land, you should nevertheless go to Attica, so that you may witness those nights of the festival of great Demeter. For then your heart may be free of care while you live, and lighter when you go to the land of the dead.

Perhaps, buried in the industrial landscape of the Greek petrochemical industry, the sanctuary of great Demeter has lost much of its mystique, but other sanctuaries still retain their sacred atmosphere. I learned much from visiting the sites where mystery cults took place, and even where the sites themselves remain undiscovered, they have left their mark: a long and detailed inscription describing the regulations for the procession and festival in honour of the Great Gods of Andania is now built into the door frame of a church in a little village in southern Greece.

Mithras killing a sacred bull (tauroctony), side A of a two-faced Roman marble relief, ca.2nd or 3rd century AD.

Controversy and confusion characterize much of what has been written about these cults in the past. The very term ‘mystery cult’ suggests that in these rituals initiates learned secret doctrines and occult wisdom, and certainly it was considered a great crime to reveal what went on. Many people have tried to discover what these secret doctrines were, and have produced as many conflicting answers. I show in the book that they have been looking in the wrong place: the mysteries did not offer access to secret doctrines, but something greater, direct access to the divine presence. So often ancient authors who write about the experience of initiation talk of going from darkness and confusion to a place of pure bright light, a sacred meadow where all is full of joy and peace.

The book is filled with photographs of cult sites, cult objects, and depictions of ritual activity. We are never shown secret rituals – although some people have thought that the strange frescoes from the so-called Villa of the Mysteries at Pompeii illustrate some form of Bacchic initiation – but we are shown enough to be able to get a good idea of what initiation involved.

The ancient mystery cults had disappeared by the end of the fifth century AD, not so much because of Christian persecution, but because wealthy non-Christians were becoming a rare sight, and it was always the rich who had been the patrons of religious activity. But the experience these cults offered, of unmediated contact with the divine, has not altogether disappeared. The whirling dance of Sufic brotherhoods in Anatolia and beyond, an activity frequently condemned by more orthodox Islamic groups, is said by participants to lead to an ecstatic state of union with God. And in a fascinating book, Salvation on Sand Mountain, the journalist Dennis Covington describes his investigation of serpent-handling churches in southern Appalachia in the USA, and his own experience of being caught up in a service and picking up a rattlesnake:

I felt no fear… I could not hear the earsplitting music. The air was silent and still, and filled with that strong, even light. And I realized that I, too, was fading into white… There is power in the act of disappearing; there is victory in the loss of self. It must be close to our conception of paradise, and it’s like before you’re born or after you die.

Meet the Author: Hugh Bowden is Senior Lecturer in Ancient History at King’s College, London and an expert on ancient religion. He has published numerous articles on Greek religion and history and is the author of Classical Athens and the Delphic Oracle: Divination and Democracy (2005) and co-editor of Herakles and Hercules: Exploring a Graeco-Roman Divinity (2005). He is currently editing Oxford Readings in Ancient Mystery Cults, a collection of major Scholarly articles on mystery cults (2010). He is also editor of an historical atlas, The Times Ancient Civilizations (2002), and has been a consultant for a large number of general and children’s books on the ancient world.