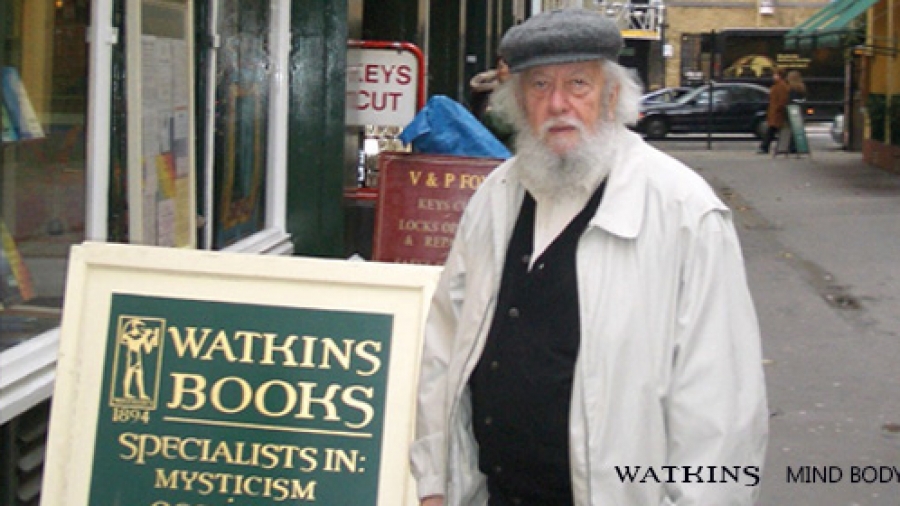 James Wasserman remembers legendary bookseller and publisher Donald Weiser, passed away peacefully at age 89, surrounded by family, in his home in Florida on April 12, 2017.

Samuel Weiser Bookstore opened its doors in New York City in 1926 in the historic Book Row district. As a young man, Donald worked alongside his father. Selling used books at first, the store grew during its nearly 70 years to become the world’s largest “Specialist in the Occult, Orientalia, and Metaphysics.” Weiser’s bookstore changed the lives of countless people. Among its better known patrons were Harry Houdini, Karl Germer, Madame Jeanne de Saltzmann, Harry Smith, Alejandro Jodorowsky, Patti Smith, Barbara Somerfield, Jimmy Page, and many others.

In the 1960s, Donald was joined by his brother-in-law Fred Mendel and the talented Chip Suzuki. Business skyrocketed as contemporary culture embraced Eastern religions, the Occult, and New Age thought. Weiser’s extensive collection of antiquarian books, imports, and new titles perfectly served the needs of this growing philosophical, religious, and spiritual community.

Samuel Weiser, Inc., the publishing company, grew organically from the bookstore. In 1957, it released several reprints of out-of-print pamphlets that were being requested by its more erudite customers. Under Donald’s leadership, the company grew to produce well over a thousand titles and become the world’s largest and most respected esoteric publishing house.

I first met Donald in 1969, in the early years of what was to be my lifelong pursuit of esoteric wisdom. I bought a copy of Diary of a Drug Fiend, the recently reprinted novel by Aleister Crowley, along with several other books. I next got Crowley’s opus Magick: In Theory and Practice, which completely captivated my imagination and became the central focus of my studies. Later that same year, Weiser released its reprint of The Book of Thoth, Crowley’s masterpiece on Tarot. It has remained a bestseller ever since. (It has just been released again in a deluxe hardcover edition in celebration of the company’s 60th anniversary.)

I began working at the bookstore in 1973, the heyday of the occult renaissance. Here I re-embraced Crowley after a period of involvement with Eastern teachings. The bookstore was the crossroads of the occult world, and the publishing company was just branching out to produce original works along with its reprints of classic titles. I moved from the bookstore to the publishing department where I was to work closely with Donald for the next four years, serving as general manager. This period is discussed in some detail in my memoir from Ibis Press, In the Center of the Fire.

Donald was a founding member in 1975 of Inner Traditions International, which has grown to become a most successful publisher of body, mind, and spirit books. In 1981, he moved to York Beach, Maine. The NYC bookstore closed its doors in the early 1990s. In Maine, Donald focused on his publishing and distribution efforts, helping to build then-wife Betty Lundsted’s Nicolas-Hays line, and conducting rare book sales through Weiser Antiquarian Books. In the 1990s, Donald was instrumental in the revival of Watkins Bookstore, London’s oldest esoteric emporium and publisher. In 2000, Samuel Weiser, Inc. was sold to become Red Wheel/Weiser Publishing.

In 2005, Donald relocated to Florida with his wife Yvonne Paglia-Weiser. Retirement eluded him, however, as he and Yvonne continued with Nicolas-Hays and started Ibis Press. They produced some 150 titles of the world’s finest esoteric literature together and their legacy will continue under Yvonne’s leadership. I have been intimately involved with the company, essentially picking up where I left off in 1977.

A celebration of Donald’s life was held at the Open Center in New York City on May 31. A lively gathering of family, colleagues, friends, former employees, and loyal customers shared their memories of this remarkable man—a giant in the occult field—whose diligence and brilliance will never be forgotten. Donald was my mentor and friend, a guide whose influence never waned for almost half a century. Raconteur, connoisseur, and bon-vivant, he will be sorely missed. He is survived by Yvonne, his four children, six grandchildren, four step-children, and sister.