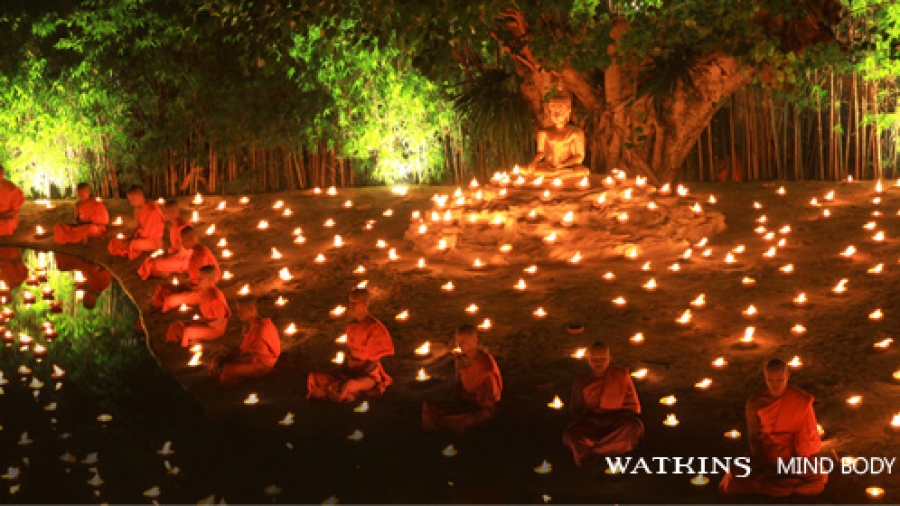 [dropcap]P[/dropcap]ictures of Jesus in the desert or Siddhartha wandering the forests are powerful representations of spiritual seeking removed from the influences of society. Jesus triumphed over Satan’s seductions while Siddhartha underwent austerities finally settling under a Bodhi tree. There he called on the earth as a witness to the sincerity of his efforts. He defeated doubt represented by the spirit Mara who taunted him. In so doing, Siddhartha became Buddha, an awakened one.

Sitting in my warm house facing my computer, with my car in the driveway, a bit of steel in my artery to keep the blood flowing, telephone, email and a freezer full of food, the life the Buddha led could hardly be more alien. The semi-tropical forests of ancient India were replete with snakes, insects, and dangerous animals but also indigenous hunter-gatherers who shared few of the values of the emerging civilization from which the Buddha came. The Buddha forsook the comforts of his society and royal family to face life in the raw. His retreat to the forests set an example for a narrow lineage of practitioners who emulated him over the subsequent millennia. But as the Buddha pointed out, it was not a practice for everyone. You needed the right disposition, otherwise the forests might “whirl away your mind.”

Why undertake such an endeavor? And what might one learn from it? If we look at the Buddha’s forest sojourn and those who followed this path, we can see some of the compromises our comforts impose on us. The Buddha was concerned that the pleasures afforded by civilization and the distractions of social life would both inflate and obscure the painful mental states which lay at the heart of what he called suffering. So, following the Buddha’s example, ancient Indian and more recent South East Asian Theravadan “Elders” took to the woods with only three robes, a begging bowl, and an umbrella tented with mosquito netting. They wandered about and begged where they could for their food, sometimes not eating for days. Each evening they would settle at the foot of a tree and sit upright pledging not to move until the sun rose. In China and Japan, Mahayana Buddhist recluses and hermits, heirs to different traditions, occupied huts in the mountains, cultivated small gardens and lived off of wild edibles they gathered. All withdrew to the wild, vowing to live non-harmingly.

The undisturbed forests of south and south east Asia are particularly dangerous and the mountains of China and Japan have their insects, rain and snow, their heat and cold and the challenges of finding sustenance. Ajaan Tate, a Thai forest monk, illustrates what a vow of non-harming can teach:

“I lived in a forest about half a kilometer from the village. One day I heard the calls of two elephants fighting, one a wild elephant and the other a domesticated elephant in rut. They battled for three days running, until the wild elephant could no longer put up a fight and died. With that, the elephant in rut went insane, running wild through the forest where I was staying, chasing people and goring them with his tusks…. I decided to depend upon my powers of endurance and my belief in the power of loving-kindness….Hearing his call I stuck my head out and saw [the elephant] standing there in a frightening stance with his ears back and his tusks gleaming white…. I lost my nerve. I jumped out of the hut and ran [to climb a tree]. [As I] had taken my first step up the trunk, a sound like a person whispering came to my ears: “You’re not for real. You’re afraid to die. Whoever’s afraid to die will have to die again.” Hearing this I let go of the tree and hurried back to the hut. I got into half-lotus position and, with my eyes open, sat facing the elephant and meditating, spreading thoughts of good will…finally the elephant flapped its ears up and down a few times, turned around and walked back in the forest.” (Tate, A. , The Autobiography of a Forest Monk)

Although Ajaan Tate and I come from different cultures and we practice differently, his experience rings true to me. Bears who have approached me while I was meditating in the woods of northern Canada or New Mexico, were powerful messengers of the fragility of my own existence, but unlike Ajaan Tate my history in the woods has not been based on a commitment to non-harming. And fear, of course is fear. As any serious meditator knows, it can be an uninvited guest even during a cozy retreat. But encountering fear while meditating where there are real consequences gives a special urgency to the experience. It also may take us back to the circumstances in which the Buddha originally made his discoveries.

In China and Japan, the aesthetic of forest practice differed as much as Mahayana, Zen, Taoism and Shinto differ from Theravada, and as the landscape and culture of the Far East differ from those of India and South East Asia. Poetry and painting became the vehicle for describing the experiences of recluses. For Cold Mountain:

…A recluse needs to be willing to live with:

Thin grass does for a mattress, 3

A tiger roars and the heart of a recluse freezes. The reality of nature is unavoidable. Collecting wild greens not only takes effort but becomes a lesson in itself. As Ryokan, a famous Zen hermit, puts it:

Torn and tattered is this life.

Food? Wild vegetables from the roadside.

Wandering among the flowers, he forgets to return to his hut. While the monks of India and Thailand approach forest practice with a kind of unadorned simplicity, East Asian recluses and hermits touch more of our sentimentality and our romance about nature. This is reflected in my own experiences:

Silently the sun moves to the west over a frozen marsh on a warm February day in New England. I emerge from the meditation hall during a retreat and hike over the icy, crusted snow down the sloping landscape, across frozen cornfields and through the woods to a beaver marsh about a half a mile wide and a mile long. My footsteps encounter many different textures. Sometimes my insulated boot crashes through the crust, sometimes just my heel. Occasionally I fall when my foot slides out from under me. As I near the marsh, I am greeted by fallen trees and standing, dead trees ringed with tooth marks. On the marsh, the smooth ice is punctuated by crusts of snow, tufts of grass and deer prints frozen from warmer days. Calmed by the tranquility of the retreat and buttressed by hours of meditating next to the marsh, I can feel the stillness in contrast to the incessant chatter in my head. I sleep for a while on a rock in the warm winter sun. On waking, the sun has advanced towards the trees on the opposite shore. For a moment I am awed by the silence, indifference and inevitability of nature. Then I begin to think again. I feel an urgency to be on time for the evening sitting in the meditation hall, and the problems of my life again possess me.

Forest practice is not for everyone. Basho, the most famous Zen hermit, could give voice to the romance of the life, but he was a failure at meditation. For most of us, we have neither the inclination, the time, nor the opportunity to meditate in the wild. Whatever the circumstances of our lives, recluses, hermits and forest monks provide a picture of what a studied, direct encounter between our humanness and raw nature is like. They remind us to connect to whatever bits of the wild that survive and give insight into the character of our own discontent.

About the Authoe: Charlie Fisher has a doctorate in mathematics from the University of California, Berkeley. He was a professor of Sociology at Brandeis University where he taught subjects ranging from history of science and the environment to the social psychology of consciousness. He spent months at a time meditating in the woods and taught meditation for many years. He is the author of Dismantling Discontent: Buddha’s Way through Darwin’s World. meditationinthewild.com

Charles S. Fisher
Meditation in the Wild: Buddhism’s Origin in the Heart of Nature
Changemakers Books