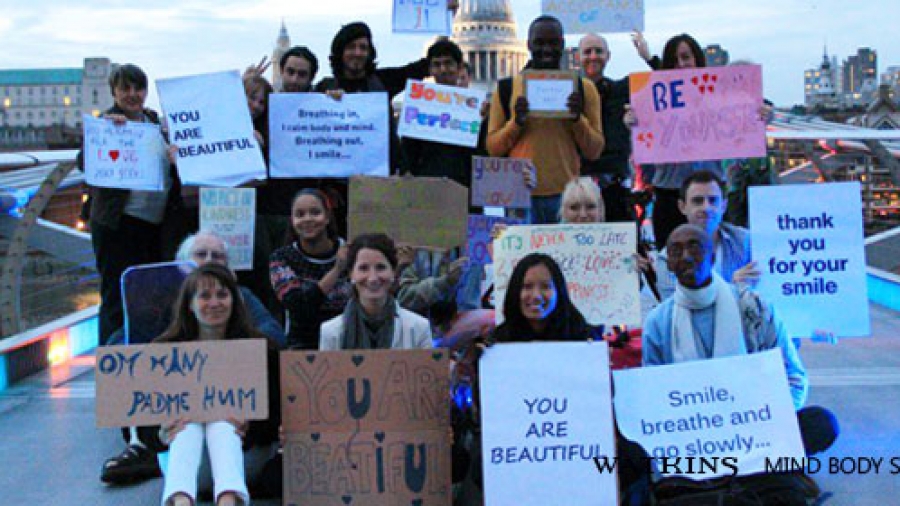 Meditation is going through something of a renaissance. What was once practised behind closed doors can now be seen in full view on the busy streets of central London. For the past year there has been a growing trend of predominately young people coming together in large numbers to meditate in open spaces unshielded from the general public. These bold but grounded gatherings have come to be known as ‘Meditation Flash Mobs’. For many young people who are looking for a spiritual path or for those just looking to feel a sense of community in a city that can feel cold and disconnected, the Flash Mob group provides a safe haven for people to congregate, and practice meditation.

Often held in the evenings, most people arrive at these meditations having come straight from their busy, stress-filled jobs in the city. For many it is an opportunity to unwind, and an opportunity to release the daily pressures of living in a fast-moving city. There are now dozens of sitting groups in and around London, but this is no ordinary meditation group. These flash mobs send out a very bold message to the public. The young people who congregate at these gatherings want to redefine the way in which they experience spirituality by bringing sacred practices like meditation out of the closet and in to the world in which they live and function.

As a result of video-sharing websites such as Youtube and social networking sites like Facebook, it has become much easier for young people to find and access key spiritual figures, New Age literature and Meet-up groups. But whilst this has helped many to delve more deeply into their spiritual journey, many are beginning to ask how can they integrate their spiritual practice with their everyday lives, and how can they engage with the world around them from this centred place?

The meditation flash mobs, which are organised by Wake Up London, consist of young mindful practitioners inspired by the teachings of Thich Nhat Hanh and are helping people to answer these probing questions. Since their inception, meditation flash groups have become something of a worldwide phenomenon, popping up in Jerusalem, Mexico, USA, Russia, Hawaii, Bulgaria, Germany, and Ireland to name a few. However, it all started with one girl, who had a vision of bringing masses of people together under the umbrella of meditation. The girl in question is 27-year old Elina Pen, who is a practising Buddhist.

Since their creation, the flash mobs have taken place in some of the capital’s most frequented hotspots, such as Trafalgar Square, Piccadilly Circus, City Hall, and the Tate Gallery. For many of the regular meditators, the flash mobs have become their way of making a difference in the world. Aleksandra, who works in hospitality, says that the experience of participating in the flash mobs keeps her centred. ‘‘It motivates me to keep meditating. You can do it by yourself, but when you know you have 20, or 40 or 100 more people with you, it’s even more empowering. And who knows, someone might see us meditating and it might inspire them to go read a book like ‘The Power of Now’, they might decide to go to a Yoga class, or do something creative. It doesn’t have to be spirituality. Any sort of creativity; anything can be meditative.’’

Katrina who has been part of the Wake Up London group since its inception but only recently attended a flash mob, says that she found the experience of meditating on top of a roof terrace next to St Pauls Cathedral to be just as powerful as her more personal experience of meditation. ‘‘I think they are both very different experiences, and I think both are needed,’’ she states. ‘‘When you are in a group it may not be as quiet, but then again you’ve got a group of people together feeling that collective energy, especially the chanting. You can’t chant the same as if you were by yourself,’’ she explains. When asked whether the flash mobs can help people to enhance their spiritual practice, Katrina says it all depends on how open you are to the experience. ‘‘If you’re unsure about doing something like this, then you’ll bring it with you and you’ll sit down and feel weird. I’m naturally more of an introverted person, but I’ve realised that there is something very powerful about us coming together like this. And although I’m not sure what the long-term effect will be, on an unseen, energetic level I think people are profoundly affected by gatherings like this.’’

Elina is optimistic about the future of the flash mob meditations, and will continue to organise them as long as there is a demand for it. ‘‘Every month I always think to myself, why am I doing this? Will people even come? But they always do,’’ she says. ‘‘I’m beginning to see that the city is like our canvas, and we can do whatever we like to it. I get such a warm feeling whenever I walk through some of the spaces that we’ve meditated in, like Trafalgar Square, because I know that we’ve meditated there, I remember the energy there. It’s like I’ve transformed it, in my mind I’ve transformed it. And I feel that maybe people have transformed their view of London through the flash mob meditations. Practising mindfulness is not just in sitting meditation, it’s a way of life.’’

Elina Penn was born in Gravesend, Kent to Cambodian refugees who had fled the Khmer Rouge regime, 27 year old Elina says she stepped on to the spiritual journey at a young age. After participating in a peace walk in protest of nuns who had been dispelled from their monasteries, Elina felt inspired to create a movement which combined spirituality with activism. The meditation flash mobs have become a reflection of this vision. Currently working for a women’s empowerment charity, it is Elina’s intention to use the Flash mobs to create a worldwide grass-roots movement of spiritual consciousness.

If you would like to find out more about Wake Up London please visit the website. You can also see one of the flash mob meditations in action.

Meet the Author: James Barber began his journalistic career at 17 writing for Headliners, a national children’s charity. As a budding journalist he found himself writing for The Times and The Independent. After graduating from university, he branched out in to television working for the likes of CNN, BBC, and Channel 4. He is currently training to become a therapist/counsellor at Queens Mary University, which has taken him deeper in to the path of healing and transcendence.