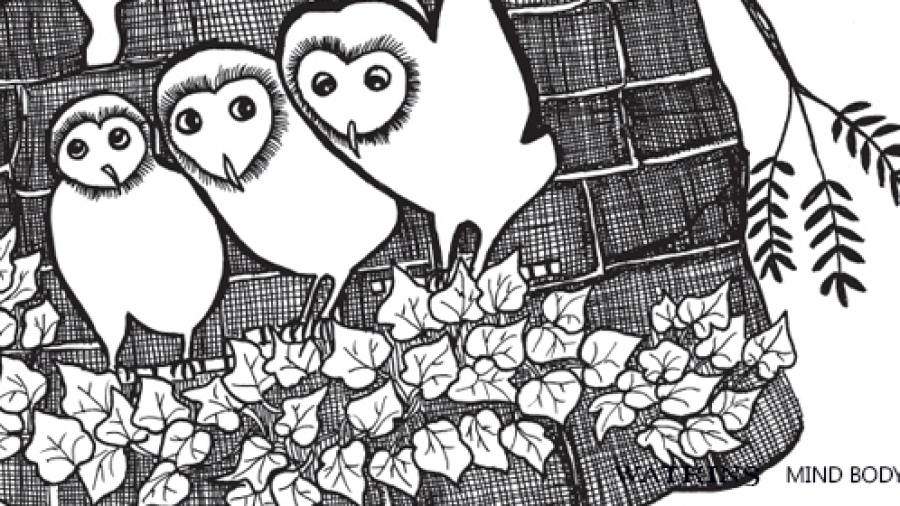 As I walk on Wenlock Edge, the wooded limestone escarpment in Shropshire where I was born and where I live, I am constantly reminded of other kinds of ‘edge’. The edge between night and day, shadow and light, wood and field, stream and stone, earth and sky, life and death: a constantly changing web of lines. I look out from Wenlock Edge into what Shropshire novelist and poet Mary Webb described as a ‘betwixt and between’ kind of place. So much has changed since the 1920s when Mary Webb wrote about the Shropshire countryside but I don’t have to pretend not to see distant street lights or hear the nag of traffic noise to feel her truth. I look out on a land between England and Wales, betwixt clod-stubborn reality and mysterious shadow. My own story wanders across the margins of this land, stitching the gaps between one thing, one place, one state of mind and another into a life.

Personal stories are about moving from place to place, and these places can be internal as well as out there in the world. Things happen in places which fix them in the memory like a photograph or rub into the imagination like frottage. Sometimes these images remain vivid, sometimes they fade into ghosts. Places have an identity, genius loci, a spirit of place. And yet places are dynamic, changeable, moody beings which shape their inhabitants and are shaped by them at the same time. Some places change so much they lose their identity and become placeless, existing only in the presence of a bird, a patch of sunlight or even a thought passing through them.

I like maps, I admire their certainty, but I don’t believe them. The Earth has tides of time and space which are never still and attempts to plot their movements lose the plot of their story. I am looking for these shifting boundaries, for thresholds, roads, rivers and Rubicons to cross. I am fascinated by things washed up by such tides or buried, lost, found, hidden or so obvious we never see them.

A lifelong fascination with natural history convinces me that wildlife, wherever it is found, is every bit as wild as in those places we think of as wilderness. Wild is a quality of Nature, a mode of existence and its life is not captured by the managerial language of biodiversity, neither is the wild a destination. Wild Nature is something words are meant to tame. Words define, order, categorise and oppress; wildness is too slippery for that, too indomitable and so it’s a fugitive from language. As such, it may appear to be holed up in those remote fastnesses where it can remain defiantly poetic in its sense and emotionally evocative in character. And yet, the more I look, the more I find the wild everywhere, hiding in plain sight, around and within. I am wandering about finding wild lives which inhabit places so wildly marginal their existence is miraculous. To witness these miracles and attempt to articulate them is really the point, if a point is needed, of my journey told here. This travelling is a rather serendipitous, undisciplined, hands-in-pockets sauntering kind of adventure. Through it I am discovering a sense of community with other wild creatures which trespass between boundaries. Through them I am not only redefining the edges around and within me but what I mean by me.

Britain has no wilderness, I am told. Scratch farmers of the Neolithic and forest-clearing axe-men of the Bronze Age began the attrition of what we imagine of the wild wood. In more recent centuries, moorland was purged of people as well as trees for sheep farming and grouse shooting. The lowlands turned into countryside, which, as far as wildlife is concerned is, to use a technical term, ‘knackered’, as are the coastal waters and seas.

Something like wilderness is restricted to cliffs, estuaries and dreams. Elsewhere in the world, the traditional idea of wilderness has long been compromised by people who go in search of it. Whether on a quest for an earthly paradise, the healing of wounds inflicted by modern society, an ecologically authentic sense of self or a more dangerous adventure overcoming ancestral challenges, wilderness tourists make demands on Nature’s indifference, arguably more so than those who have lived there for countless centuries. Despite appeals to re-connect the urbanised, industrialised consumer with Nature and think differently about the non-human world, the war against Nature intensifies. This is not a war first prosecuted by modernists, it is one which began with the origins of civilisation when a fear of Nature I describe as ecophobia became a fundamental part of human existence.

This fear persists and, even with the rise of environmentalism, it is responsible for atrocities to Nature as brutal as any war of these mad times. Floods, droughts, storms, desertification, melting ice caps and tundra, oceanic pollution, atmospheric pollution, deforestation, urban sprawl, intensive agriculture, over-fishing, globalisation, species extinction: how sickening the litany of destruction and its anxieties has become. However, this wave of nausea masks the unnoticed creation of new kinds of wild. Degraded habitats, swarms of ‘invasive’ species, novel pathogens and diseases: a Nature we don’t like is replacing the Nature we do.

The creativity of Nature lies in the old chaos, it surges from Earth’s fault lines. Life leaks from the cracks and not from the wishful thinking of balance that people have struggled to engineer. This is not a good thing for those who cling to a pastoral vision of Nature and the duty of stewardship to manage it for the good of humanity. Although this is a romantic impulse I recognise in myself, I now know that game is up. ‘Nature is good,’ says philosopher Alan Holland, ‘even if it’s not good for us.’ In a time of environmental and social crisis, there is a risk of taking myself too seriously and I apologise (sort of ) for a pervading sense of melancholy in this story. There are, however, surprises, discoveries and excitements which bring moments of real joy to this journey and, I hope, a sense of humour which appreciates the absurdity of our plight. Even in this terrible undoing of the world, I feel a dark wonder for what will replace it.

This journey into Britain’s secret wilds begins when I resolve to stop looking for them. One thing leads to another and the wild finds me. Decisions about where to go and when are made more by happenstance and random coincidence than planning. The only conscious thing I do is to keep notebooks of writing in the field. These field notes link back to others because, as a writer, journalist, broadcaster, conservationist and gardener, I’ve been very fortunate to have done a lot of wandering around looking at wildlife and landscapes and writing about it.

When I begin to fit these field notes together, what emerges is a journey through Britain’s changing landscapes. From Ice Age caves to suburbia I scramble about in the ruins of utopian dreams and dystopian nightmares, picking through the strandline, ducking in and out of shadows between wood and heath, listening to the thinking swarms of life, standing in a ghost forest, haunting the dusk. I meet extraordinary people and learn from their journeys. In the strange yet ordinary ridgeways, shingle spits, fens, woods, streets and ditches, the land’s stories find me. All I do is splice together what I’ve learned from natural history, literature, art, philosophy and folklore with raw intuitions and experience, to describe a Nature that is inspiring yet intimidating, miraculous yet mundane, sacred, wasteland.

This is a work of dark wonder for what is happening to the land in which my story lives. It is a journey with no idea where it’s going, no ideological compass and no map on which the secret wilds can be plotted. These are a few field notes from along the edge between the fear and love of Nature, without which there is nothing.

Extracted from: Field Notes from the Edge: Journeys through Britain’s Secret Wilderness by Paul Evans.

About the author: Best known as The Guardian’s Country Diarist, Paul Evans is a nature writer, playwright,

poet, broadcaster and environmental journalist whose work includes the book Herbaceous. His practical background in horticulture and nature conservation combine with an academic interest in environmental philosophy into a creative practice which seeks to articulate a personal and cultural relationship with Nature. He writes for publications including BBC Wildlife, Geographical, Resurgence, The National Trust Magazine and Country Living and his work appears in many anthologies. In his time he has also been a grave digger, a gardener for the National Trust, worked for Percy Thrower, been commissioned by a billionaire to collect samples of all the plants in eastern North America, fronted a Punk band and looked after botanical gardens in New York.  He has had his poetry set to music by an American folk group and even been the subject of an MA at a Belgian university. He lives with his family in Much Wenlock, Shropshire where he was born.