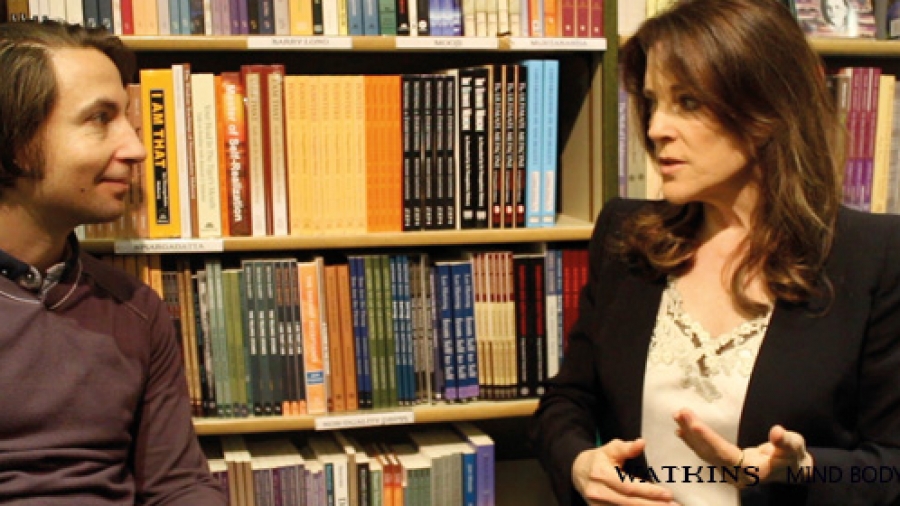 An Interview with Marianne Williamson on the role of the feminine, meditation and engaged spirituality in today’s world by Etan Ilfeld.

Etan Ilfeld: I notice that you mention God a lot, but you always use the masculine – why is that?
Marianne Williamson: I actually wrote a book called a Woman’s Worth, and it’s all about the Goddess – but I write primarily on the principles of the Course In Miracles. There’s one Truth and it’s spoken in many different ways. I do believe that they’re all just kaleidoscopic visions of universal, spiritual themes. But as someone who does lecture and write on the Course in Miracles, that is the language of the course; the traditional Judeo-Christian ‘God’ is He, and as I am Jewish and was raised Jewish, God being a he was never a problem for me. I appreciate that this may be a problem for some people and by all means they should use the language that works for them. Nobody up there is going “oh my god, get the words right!”

EI: Alanis Morissette played God in the film Dogma…
MW: As the Course in Miracles says, words are, at best, symbols. Now, I will say this as far as God being ‘he’. In the eastern religions there’s the Yin and the Yang. Yin is the feminine, earth principle and Yang is the masculine, sky or spirit principle. Now we call ‘Mother Earth’ feminine all the time – I never hear a man say “Why do we call it Mother Earth? Why don’t we call it FATHER Mother Earth?!”. Instinctively we relate to the energies of the earth as female; it’s kind of like a male or female plug, it’s not a genital issue, but it is a profound sense that the masculine enters into the feminine. In the sense that God is Masculine, Humanity is she, and the idea of God entering your heart, which is the mystical Christic perspective, that you are penetrated and impregnated by God, and out of your humanity, which is feminine, there is born the Christ which is neither masculine nor feminine. And so, there are ways in which the beautiful interplay of the masculine and feminine is experienced, as long as we keep it out of our anthropomorphic gender, genital based filters.

EI: You described a pseudo-Buddhist piece of Graffiti you once saw: “Don’t just do something, sit there!” . The Ego always wants to do something, and it’s important to, as you put it, “quietly seek the peace of God”. So often we forget that knowing how to not-do, is an action, too.
MW: Well, living in the modern world, we are constantly barraged by a clutter of ultimately meaningless stimulus. That’s day in, day out. Our ancestors didn’t have to deal with that, and the human brain literally is not set for that. When you do physical exercise you are training your physical muscles so that you can move. When you do spiritual exercise, you are training your internal, attitudinal muscles so you can remain motionless and non-reactive. People have no impulse control, the whole world has shpilkes, where the nervous system is like a crystal vase, too much water is coming in and everyone’s nervous system is shattered! And that’s what meditation helps with.

A lot of the spiritual reclamation of the soul has to do with the cultivation of a quiet mind, a quiet environment. In Judaism and Christianity, there is an expression: ‘the small still voice for God’. The ego speaks first and speaks loudest. And meditation gives us the capacity to hear this small still voice, that will not impose itself upon you but is there. Through meditation, prayer, serious spiritual practice we become finely tuned intuitional instruments.

EI: I understand you’ve got a new book coming out soon. I’d love to hear what it’s about.
MW: The title is ‘Tears to Triumph: The Spiritual Journey from Suffering to Enlightenment’. There has developed in our culture a way we’ve put a cheap yellow smile, the happy face, all over everything. It has given us a distrust of unhappiness. And just as there are storms in nature, and they serve a function, there are storms in normal life. People die, divorce, heartbreak, grief, financial loss, financial ruin, recovery, losing your job… and these can lead to very dark nights of trhe soul.  What I think of as a psycho-therapeutic-pharmacological-industrial complex has kind of appropriated depression for its own purposes over the last few years, and woe to the person who questions that. Many depressing periods in life are certainly, validly deemed spiritual crises. And some may say “but you’re not a doctor!” and to them I would say, “How can I look to your mindset to heal a crisis of the soul if you don’t even acknowledge that the soul exists I hear people say that they have an anxiety disorder – this whole nation has an anxiety disorder!

Unfettered global capitalism is insane. The way we treat the planet is insane. We now know you can’t talk about the mental and emotional problems of an adolescent outside the context of the full family system. I think that now we need to talk about how we can’t take about the nature of individual suffering outside the context of the social-political structures of the nation. I think the issue is for us to realise is that over the last 100 years we have taken suffering and made it so much the issue of the individual that this has kept us from recognising some of the larger social forces that are depressing all of us, and that then keeps us from changing those forces.

EI: A Course in Miracles talks a lot about how Love and Fear are powerful drivers – the drivers. There’s a sentence that talks about how military power might try to take on terrorism, but only love has the power to dismantle the hate from which terrorism emerges. Could you explain that?
MW: First of all if, in the years previous to 9/11 if more people had seen the American flag decal on schools, roads, hospitals, supporting what they knew to be genuinely democratic institutions, then I think there might not have been a 9/11. There is no way to overestimate the part that the invasion of Iraq played in the creation of ISIL. In terms of spirituality, we have atoning to do.  I don’t think Germany would be doing as well as it is today socially and economically if they had not done full mea culpa, full atonement, including reparations after World War 2.

Nations atone – the same spiritual principles that rule the transformation of an individual apply to a nation, because the nation is just a group of individuals. So, I don’t expect Tony Blair or George Bush to get on TV sometime soon and atone, but I think that is what we can do.  The energy that pervades a system when a critical mass of the population comes to a new way of thinking can not be overestimated. The geopolitical economic principles that rule our society are not based on love, they’re based on short term economic gain for huge multinational corporate forces. As long as that is our bottom line as opposed to genuine humanitarian concern for a real effort to assuage unnecessary human suffering on this planet, then that will continue. Only deep spiritual reflectiveness and activism can make it right.

About the author: Marianne Williamson is an American spiritual teacher, author and lecturer. She has published eleven books, including four New York Times number one bestsellers. She is the founder of Project Angel Food, a meals-on-wheels program that serves homebound people with AIDS in the Los Angeles area, and the co-founder of The Peace Alliance, a grassroots campaign supporting legislation to establish a United States Department of Peace. She serves on the Board of Directors of the RESULTS organization, which works to end poverty in the United States and around the world. Williamson is also the force behind Sister Giant, a series of seminars and teaching sessions that provides women with the information and tools needed to be political candidates. Through these seminars, she encourages women to run for office and align their politics with their spiritual values.

You can listen to the full interview on Watkins Books youtube channel.