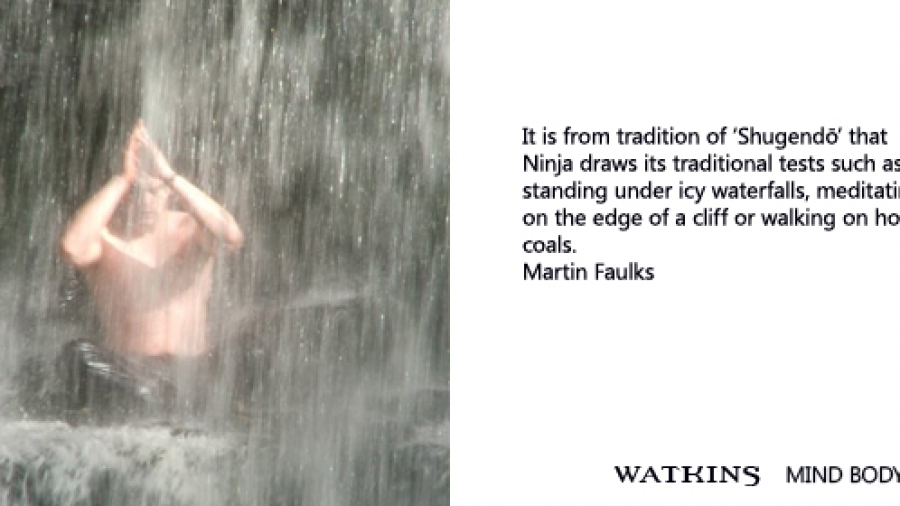 [dropcap]T[/dropcap]he word Ninja instantly brings to mind the image of a martial arts master in a black suit that uses silent cunning and exotic weapons to assassinate his opponents. A master of a secret art that allows him to turn invisible, read minds and even control the very forces of nature. This image is so powerful that in the West our entire culture is infiltrated with the Ninja.

The Japanese word Ninja may be translated as “one skilled in the art of stealth”. But Nin can also mean “to Endure”. So one alternative meaning is “the art of enduring” or one who is skilled in the art of enduring. The original Ninja recorded in Japanese history were in fact a group of highly trained warriors who lived up to both possible interpretations of their name. They were not only skilled in the invisible arts but also legendary for their ability to live through difficult and dangerous circumstances. The Ninja were a group who chose not to be limited by the strict Samurai warrior code. The Way of Samurai or Bushido, as it was called, consisted of a very rigid code of conduct with a focus on directness, truthfulness and self discipline. They practiced a system of extremely sophisticated warfare that incorporated techniques of assassination, espionage, information gathering and spiritual development. When the odds were against a family or army the Ninja could be hired to bring victory when others could not. The Ninja favoured cunning and subtlety over the Samurai forcefulness and directness, applying the method that required minimum effort to achieve a result, while exposing themselves to the least amount of danger. Often a few Ninja could achieve through subtle social manipulation or deception what it would take many years of bloody combat to be achieved through normal means.

In this respect Ninjutsu was simply the art of winning. Because of their freedom from such concepts as honour and fair play they were infinitely adaptable and thus able to truly focus their creativity on achieving their goals without consideration of others opinions. Becoming a Ninja Warrior is the story of my quest to Japan to learn the secrets of Shinobi Night warriors from the last living Ninja, during which I discovered that spiritual enlightenment and mystical training are in fact the most deadly weapons in a ninja’s arsenal.

Becoming a Ninja Warrior: A Quest to Recover the Secret Legacy of Japan’s Most Secret Warriors by Martin Faulks, published by Ian Allan publishing, Hardback (320 pages).

The Ninja didn’t just practice the arts of combat and stealth. They also had a whole spiritual tradition drawn from a Japanese spiritual sect called the Yamabushi. These secret teachings included methods of meditation, mantras and secret magical hand signs all with a focus on learning to understand, overcome and control the elements of Earth, Air, Fire and Water.
Yamabushi literally translates as “One who lies/hides in the mountains”. Yamabushi are Japanese mountain ascetic hermits with a long tradition as mighty warriors endowed with supernatural powers. They follow a path called Shugendō which translates literally as ‘magical powers through spiritual trials’. It is from this tradition that Ninja draws its traditional tests such as standing under waterfalls, meditating on the edge of a cliff, being buried alive, or walking on hot coals. Firewalking to the Ninja is of course a trial associated with overcoming and mastering the Fire element.

On the 11th of November 2010, I performed a fire walk at a fundraising event for Break Charity at the Kings Head pub in Letheringsett, Norfolk helping to raise over £8000 for charity.
Looking out of the window of the pub I could see the flames of the long, thin fire reaching almost to my waist level. The wood burning looked just like a barbeque. I remember being surprised. I don’t know what I thought when I signed up for the fire-walking challenge, but I believe that some part of me subconsciously expected the fire to be fake or safe in some way. Perhaps I thought it would be a projector or special types of wood which didn’t burn as hot as others. Maybe I thought they were going to line up lots of Quality Street wrappers and shine bright lights underneath them for me to walk across.The actual primeval impact of the fire brought the reality of what I was about to do into my mind’s eye. I have had many forms of trials in my life, but this had a different feel. I was about to walk over a fire in front of a big crowd of people.In preparation for the feat, I put myself into a state of inner calmness and tranquillity.

From left: A traditional Yamabushi fire walk and Martin treads the hot coals for Break Charity

As I approached the glowing embers, I felt nothing but a sense of elation as my feet touched on the hot coals. As I continued to walk, I could feel heat beneath my feet, but no pain. There was a feeling of indestructibility as I continued from one side to the other. Only when I stopped, did I notice a hot coal caught between two of my toes and felt the searing, burning pain as I kicked it quickly away. The fire-walk was over, but in my mind I thought about the hidden capabilities that we all have, but hold back.

The charity Break (www.break-charity.org) provides a variety of high quality services to a range of vulnerable children, adults and families. If you have an idea to raise support for Break, please contact Martin Green: Martin.g@break-charity.org. To keep up to date with my Ninja adventures please visit www.martinfaulks.com.

Meet the Author: Martin Faulks is an  author, martial artist and prominent Freemason. For Martin, martial arts are a path of enlightenment, discipline and self control. Their purpose being to develop the will, cultivate the body and to enable the individual to protect themselves and others. He has a black belt in Japanese Ninjutsu (Bujinkan Budo Taijutsu) and the Korean martial art, Kuk Sool Won and is proficient in the spiritual disciplines of China, including Tai Chi, meditation, Qi Gong and the legendary form of Yi Jin Jing. He is a four time national martial arts champion and a regional fencing champion. Visit his website: www.martinfaulks.com