The full catalogue is available to view HERE.

‘Avatars’ because some Hindus believe that the image (‘arca’ in Sanskrit) of their god is an actual incarnation or ‘avatara’ of Vishnu. Most probably believe that images, even ones made in cheap, huge runs like calendar prints, offer a way to access the gods or at least worship them. Nearly 80% of Indians are Hindus, which probably means that more than a billion people worldwide believe to some extent that ‘arcas’ are the way to their ‘avataras’. For Hindus, they are ‘darshan’ or an auspicious sight of the hold deity that reflects back on the observer. The holy being transmigrates into the image when it is established through the making of a religious object, ritualized homage, offerings and worship and becomes an ‘avatara’ or an incarnation of the holy being, a translucent vehicle of ‘darshan’. As the thirteenth century theologian Pillai Lokacarya, describing the incarnation of Vishnu, put it:

‘But his incarnation in an image is like the full deep pools in those rivers where water is always available” (quoted p-31 Richard H. Davis – Lives of Indian Images, 1997). 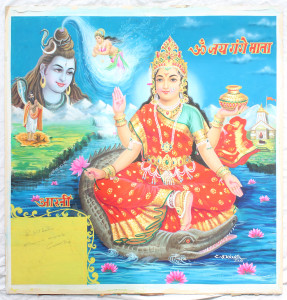 They still create a buzz of surprise a half century or so after many of them were first stuffed into the student backpack, or loaded into the VW camper, along with the Afghan coat, Patchouli oil, new religious movement and harem pants – trophies from the ‘hippy trail’ that hung up in the bedsits and communes of London and Berkeley. They are mixed here with gouaches aimed at the Islamic peoples of India and there is even one very odd looking syncretic Indian Madonna and several Indian ‘modernist’works made for advertising beedies, radios or whatever, just like the ‘sacred’ ones but in a secular style.

These intensely colourful paintings are industrial objects, a sort of ‘source code’ for mass produced calendars, adverts and framed pictures that are still sold in the vast market network of small shops, pilgrimage sites, picture marts and framed art outlets of India and hung up in every location imaginable from over the shop till for good fortune or on the wall of a new business, or in the ticket office for safe travels and in the family home of village and city.

The ‘backs’ are almost as interesting as the images, the card support is often covered with rubbish paper, written over and crossed out and rejigged again and with pinholes and glue spots from tacking up. Virtually all the corners are bumped because runners moved them around and photographed them repeatedly. They are remarkable survivals of a gritty and challenging industrial milieu. They bear redundant classification systems, numbers, classmarks and rubber stamps and, as it is India, absolutely everything is reused; as in our example of Radha and Krishna where the artist just flipped over the board and started again.

They are a rich source for modern offset printing history and were largely created for the printer/publishers of the small town of Sivakasi in Tamil Nadu, a major world print-production and publishing centre that you’ve never heard of and that was once called ‘mini Japan’ by Nehru. They were essentially a by-product of the need for decorative labels for fireworks, a business in which the enterprising Nadar caste in Sivakasi were pioneers.

Roots go deep, in terms of style, aesthetics and the way they are manufactured, they are related to the Kalighat paintings of the Patuas of West Bengal that spanned the early nineteenth to early twentieth centuries. Rapidly painted prints of gods and the stories of the day were produced for the tourist and pilgrim trade of the temple of Kali on the banks of a creek near to Calcutta. More fundamentally, they owe a direct debt to the work of the great Raja Ravi Varma. His paintings sell for ‘respectable’ sums and he set up an eponymous, now famous, press in the late nineteenth century to reproduce his art as cheap oleographs. There were many others who heeded his example and ploughed their own furrows.

Of course, they reflect the longstanding formal religious traditions of India but also the popular culture of the mass media, they are entwined with very popular TV serializations of The Epics and the Bollywood film industry and vice versa. Once looked down on by Indianists and Westernisers alike, they are now seen as‘authentic kitsch’ as the anthropologist Christopher Pinney once described them. Avatars of the Indian gritty Indian bazaar, the printed versions are egalitarian objects that are revered and garlanded in the homes of village, town and street.

They were bought by John Randall in India, at source, in commerce and not from the ‘sophisticated’ art and antiques markets and showrooms of the Western World. They were produced by makers and artists, often in family businesses, and not thought up by Indian ‘Mad Men’ interrogating a focus group. In a sense they are the most important of the arts of modern

India, they are Indian Pop Art. ‘Bazaar Avatars’, the catalogue and show, is perhaps unprecedented as I don’t think there has been a commercial ‘selling’ exhibition dealing with late twentieth century original ‘calendar art’, or at least not in London.

To our knowledge, there been very few organised exhibitions of even the printed ephemera. One of these was 1997’s ‘Changing Myths and Images: Twentieth-Century Popular Art in India’ an exhibition at the Indiana University Art Museum. This was largely based on the co-curator and cataloguer H. Daniel Smith’s 3500 plus item poster archive, now in the Special Collections Research Center at Syracuse University Libraries, and also upon the Ainslie T. Embree Collection. The catalogue for this exhibition has been extensively consulted for ‘Bazaar Avatars’, along with Smith’ Excel ‘handlist’ for his poster archive. There was another seminal show, again of the printed works, at the Eicher Gallery in 1996 entitled ‘From Goddess to Pin-Up’ curated by Pattrica Uberoi, as the title suggests it focused on representations of women.

Original poster designs, such as these, seem to be rare in the world’s libraries and museums with institutions tending to acquire only the printed versions in large quantities, as with Syracuse University and the British Museum. ‘Bazaar Avatars’ presents the private collector, donor or institution with a possibly unique opportunity, thus far, to acquire original artworks that are the basis of those multitudes of posters.