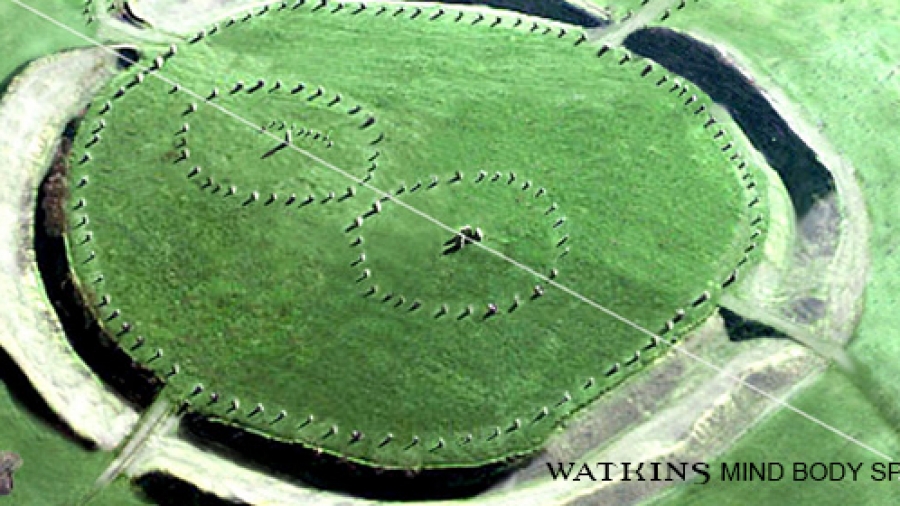 [dropcap]W[/dropcap]hen I first visited Avebury, as a student in 1981, I sensed that I would one day write about it; but the subject of the book eluded me for many years: every time I tried I found I could add nothing to our understanding of this monumental site of British prehistory.  Not until twenty-five years had passed, and software had arrived that was capable of recreating the ancient night sky—effectively giving me a desktop prehistoric planetarium—did the final piece of my Avebury jigsaw puzzle fall into place.  Professor Ronald Hutton comments on the back cover of Avebury Cosmos that the sky is ‘the one part of the prehistoric landscape which can [now] be reconstructed with real accuracy’.To do this for any particular location, you also need reasonably precise dates for its construction. Over the last ten years, these dates have been methodically produced for Avebury via carbon-dating. Once these two pieces of information were put together—the dates and the sky-maps—I was able to see how profoundly the Neolithic people were connected to the sky: it was these sky-mysteries, above all, that motivated our ancestors’ creation of one of the most extraordinary monuments in the prehistoric world.

In the book I invite you to stand beside the megalith builders, look at their sky and reimagine their world and their motivations. Thanks to recent archaeology we have a pretty clear idea of what the lost parts of the Avebury complex once looked like. The challenge now is to imagine how the Neolithic people saw their surrounding world. In navigating their way through this vibrant, mysterious and sometimes dangerous environment they were undoubtedly guided by different numinous powers, including Sun, Moon and stars.

It was no surprise to me that our prehistoric ancestors organized their world through the solar and lunar cycles; after all, these cycles are primary influences upon our bodily rhythms as well as those of our environment.  But what astonished me was how deeply these ancient builders had explored the mysteries of the stars.  For example, I realised from the main alignments of Avebury that the Neolithic monument builders would have been aware of precession—the 26,000 year movement of the stars relative to the seasons. Yet it seems they did not see this process as we do, in terms of orbits and calculable numbers, but rather in terms of changing patterns of divine power. Their monuments reveal that their collective aspiration was to be attuned to all the cycles of the cosmos.

As I scanned the ancient star-maps, I came to see how the relationship between the heavens and their monuments would have provided our ancestors with vital calendars—fixing auspicious times for festivities and rituals, giving timing for the hunt, guiding the new agricultural labours, and measuring the fertility cycles of humans and their domesticated animals.  If they acted outside of these divinely ordained cycles, thereby breaking their sacred bond with divine law, or if the hunt or their harvests failed, then their great monumental sites also gave the Neolithic people the perfect place and opportunity to propitiate the cosmic powers, and realign themselves to their changing order.

I believe we could learn a great deal from the reverent relationship to both earth and sky upheld by our distant ancestors.  The first legal codes began from observation of the heavenly cycles, astronomy began as divination or astrology. By forgetting our ancestors’ laborious efforts to remain in harmony with a cosmos they perceived as divine, we may have made ourselves more rational, but we are both spiritually and morally poorer.[span3]As I scanned the ancient star-maps, I came to see how the relationship between the heavens and their monuments would have provided our ancestors with vital calendars—fixing auspicious times for festivities and rituals, giving timing for the hunt, guiding the new agricultural labours, and measuring the fertility cycles of humans and their domesticated animals. [/span3]

While all Avebury’s sky-alignments marked soli-lunar time, I found that key alignments from Windmill Hill, Avebury and Silbury Hill were to forgotten southern stars, especially to the second brightest star in the sky, alpha Centauri, and the Southern Cross.  At this time, these stars not only rose and set on the site’s main alignments during winter nights, but their visibility also coincided with a spectacular sky phenomenon, as the entire circle of the Milky Way formed a complete ring around the horizon of Avebury. When the great circle of white chalk that comprised Avebury henge was being built in the early third millennium BCE, it would have mirrored the galaxy.  Avebury henge is a model of the Milky Way!

Once it became clear what its builder’s were looking at, new light could be shed on the creation of Avebury’s later monuments, especially Silbury Hill. The womb-shaped Hill was built after 2400 BCE, in the context of a precessionally changing night sky and a simultaneously changing social order at the beginning of the Bronze Age. As the order of the heavens changed, crucial stars became lost from view, while the complete ring of the galaxy was no longer visible. Did the monument builders see this as a cause of change in human fortunes upon the Earth? Was the construction of Silbury Hill an attempt to mark or even stop these changes taking place in the heavens, changes that were seen as having a serious negative effect upon the Earth?

So what relevance does Avebury have for our lives today?  What lessons can we learn from this era of prehistory?  At the end of the Industrial Revolution, we are now faced with impending social, economic and climatic changes as great as or greater than those faced during the Neolithic agricultural revolution.  What are our means for understanding this impending change? Can we realign ourselves to the divine order honoured by our ancestors?  Our scientists may have reduced the genetic and cosmic orders to codes and numbers, but they still influence our lives, just as modern ethics, statutes and morals still have a (seldom-acknowledged) relationship to divine law. Where are we now in the great cosmic order of things?  And where are the great terrestrial monuments of our generation that keep us attuned to the life-giving heavenly order?

About the Author: Nicholas R. Mann’s books include Sacred Geometry of Washington DC, Glastonbury Tor, and Isle of Avalon. A poet, geomancer and artist, Nicholas is currently engaged in a work he thinks likely to remain unfinished, The Soul.  He lives in Glastonbury with his partner, astrologer and writer Philippa Glasson; their website is: www.britishmysteries.co.uk