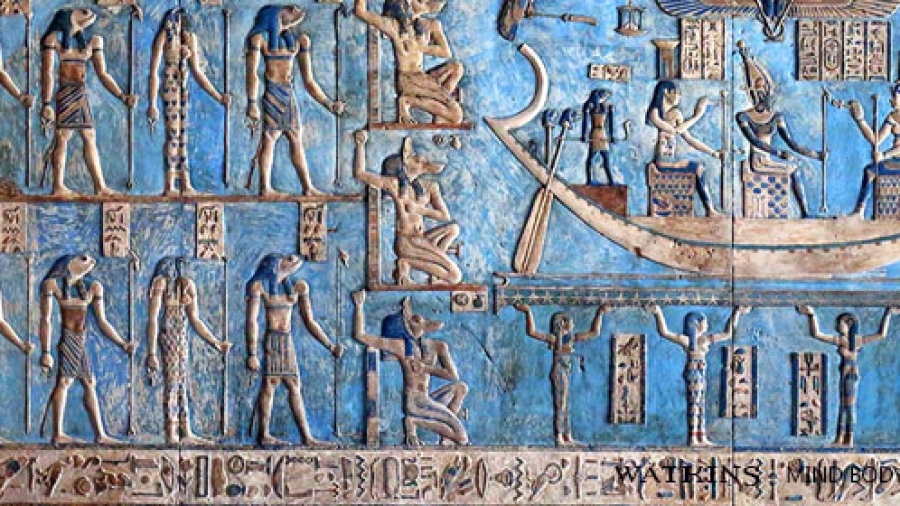 [dropcap]T[/dropcap]he interest in the religion and spirituality of the Egyptians is increasing steadily as people begin to realise that it is possible to follow this ancient belief in the 21st century. This religion is the oldest recorded belief system in the world, having just entered its sixth millennia – and can still teach us how to live in both earthly and cosmic harmony.  But first, we need to put things into some sort of perspective…

In Egypt, the actual worship of the gods was performed by a professional high priesthood with two main functions: the god’s daily offering ceremony (which was a private affair) and the periodic public festivals. At the next level there were the lower ranks of the priesthood who performed other tasks within the temple precincts at different levels of importance: men and women of letters who maintained the order within the establishment.

On a popular level, the seasonal festivals commemorated various events in which the people could participate, i.e. New Years Day, the sowing and the harvest, and the Inundation of the Nile. Ordinary Egyptians only participated in temple ritual if it linked their destiny or well-being with that of Pharaoh or State (which was one and the same thing), but no doubt they all turned out in force at the great temples when Pharaoh fulfilled his obligations on the principle feast-days. Historical records show that even the poorest were given to celebration and feasting whenever the opportunity allowed, although neither the public nor the lesser priesthood were admitted within the precincts of the inner temple.

To overcome this exclusion, ordinary people set up their own sacred areas for worship, which have been found on the periphery of the temples, in their homes and tombs. These rites, whether celebrated in the outer courts of the temple, or in a private personal space, were all considered a divine act of worship in favour of their particular god. If they required a spell casting or a magical talisman made, they went along to the appropriate temple and the priest provided whatever was necessary.

Let’s make no bones about it, today’s Egyptian interpretation belongs to a revivalist tradition and should not claim to be anything else. Nevertheless, the system needs to be as close as it can to the beliefs of ancient Egypt without falling into the trap of lumping all the gods together in one ageless pantheon … and expecting their heka to work!  In order to follow the Old Ways, it is easier to understand if we use three separate approaches:

This three-fold approach needs to be understood from the start, but so does the enormous time span of Egyptian history, which always tends to complicate matters when identifying with a particular deity or Dynasty.  For example a pre- or early dynastic Egyptian would probably not have a clue who Isis or Osiris were if they did not live in the particular province or nome, of which these were merely localised deities.  Conversely, a New Kingdom priest would look upon Neith as simply a minor funerary goddess, when in her hey-day she was the mighty hunter-warrior goddess of the pre- and early dynastic Egyptians.

A fundamental study is necessary because not everyone works magically or mystically, at the same level. Some take longer to realise that an intimate knowledge of Egyptian myth and its attendant politics is essential for the effective practice of magic/mysticism at a higher level of awareness.  A knowledge that has to extend beyond the stereotypical deities of popular Egyptomania to embrace a wider and loftier range of supernatural beings; and to accept that the deities are not real ‘gods’ at the student’s beck and call.  This is why it becomes so important to successful magic to be able to differentiate between the different levels of magic, historical influence and religious emphasis that mark the subtle shifts of importance between the different Paths. And to do so safely.

It may appear that this is merely massaging a system that purports to be all things to all men, but this is not the case. The original Egyptian religion was stellar based. Early texts refer to the stairway to heaven, and the alignment of the mortuary temples situated toward the north (the direction of the circumpolar stars) reveal the importance of the Imperishable Stars within the Mysteries. According to Egyptologists, the architectural changes in pyramid design reflect the shift from a stellar cult to one that was fully solar as the religious ideology changed and the newer priesthood gained power. As each new centre became the focus of power, so the religion altered and a new set of myths were created to attest to the local gods’ supremacy over the Old Ones.

These shifting influences on Egyptian history meant that reference texts fell roughly into two separate categories. Firstly, actual magical, religious and mythological sources written by the early native priesthood for the Egyptian people and secondly, later accounts of magic, religion and mythology translated by Greek and Roman historians and philosophers, who recorded information as told to them by latter-day Egyptian priests, since they were unable to read the texts for themselves. And by the time of the Graeco-Roman invasions the priesthood were themselves extremely vague and uncertain about the early dynastic religion of their own country. Subsequent translations indicate that they did not really understand the rudimentary principles of the archaic religious system, the primitive stellar-cult, or the nature of its symbolism.

Unfortunately, many present-day writings on the Egyptian Mystery Tradition make no attempt to unravel the tangled skeins of this magico-religious evolution. Rather, they impose some over-simplified form of order on the chaos created by the multitude of dual-purpose gods from different periods of history. But there is no way of simplifying this complicated tapestry because of the immense time span from pre-dynastic times to the Battle of Actium, which sealed the fate of the last ruling Great House of Egypt. Cleopatra, in terms of dating, was nearer to man landing on the moon than to the building of the Great Pyramid at Giza (Old Kingdom).

In the days of Egyptian antiquity, however, many of the gods were abstract concepts rather than actual anthropomorphic god pictures familiar to us today.  Many of the later fully-morphed deities were originally theological concepts represented by a distinctive hieroglyph, very similar to the correspondences used in modern ritual magic. As the need for a controlling religion grew, so did the spiritual need for more tangible forms on which to focus the common people’s devotions.

The common man’s mind dwelt on the concrete, not the abstract and so the gods took on those easily recognisable animal-human shapes to satisfy the religious-teaching-by-pictures demands of less scholarly folk.  The images recorded in tomb paintings, bas-relief and statuary were intended to represent living forms of the gods themselves, or Pharaoh as a god.  There was a simple reason behind this. Egyptian life, magic and religion were inextricably intertwined, one simply could not, and did not exist, without the other. God, or a male/female/multiple concept of that god, was manifest in everything animate and inanimate.

By the Middle Kingdom, the attributes of the major gods were subsequently extended to create a whole pantheon of relatives and helpers. For example, the concept of Ma’at as the symbolic terminology for cosmic order, and earthly truth and justice, was depicted in the Pyramid Texts by an ostrich feather. This concept later metamorphosed into a beautiful woman, who sat in judgement on those in the Underworld; she was sometimes shown as the wife of Thoth, or the female embodiment of the god himself.  In fact, the popular form of Egyptian religion, as most people know it today, is fundamentally a Greek interpretation.

Egyptian religion developed over thousands of years, with each deity assuming many forms under the influence of the many different religious movements and/or foreign invasions. Each form also developed its own positive and negative aspects, which responded in various ways to different people, and so it is impossible to be dogmatic about how the gods of those different theologies relate and blend.  It is also important to realise that the original religion was never an earth-bound concept since the priesthood explored mysticism on a cosmic scale: their spirituality extending to the stars and beyond. The Egyptian civilisation took over 3000 years to fully evolve and a further 2000 years to decay, which is why the Egyptian Mystery Tradition cannot be encapsulated into convenient modern packaging.

What the Temple of Khem’s teaching attempts to do is to offer a complete guide to practising the ancient system of belief based on sound archaeological and anthropological evidence combined with proven [modern] magical techniques. With its own authentic temple calendar providing a daily framework of observance and dedication, it becomes possible to follow in the actual footsteps of the ancient people of the Nile Valley.

This new ‘Egyptian Book of Days’ has been compiled from the various Greek and Demotic Magical Papyri lodged in the British Museum, the Bibliotheque Nationale in Paris, the Staarliche Museum in Berlin and the Rijksmuseum in Leiden; the Sallier Papyrus IV (No 10184) and The Cairo Calendar (No 86637) currently lodged in the British and Cairo Museums.  The latter reveals that although the document itself was made during the time of Rameses II (Dynasty XIX), it was a ‘reprint’ of much earlier material.

The calendar lists the names of the deities whose anniversaries take place on every day of the year including special spells (prayers) that were devised for the protection on certain ‘unlucky’ days.  Every day was considered to have some magical significance, which caused it to be “good, bad, or partly good and partly bad”.  By consulting these lists of lucky and unlucky days, each individual could protect himself and his family against the danger of the day.

By viewing the Egyptian Mystery Tradition as a continuing and expanding faith, with its own temple calendar, established history and ‘futuristic’ thinking, it is possible to see that this very ancient wisdom has a very positive place in the modern world.