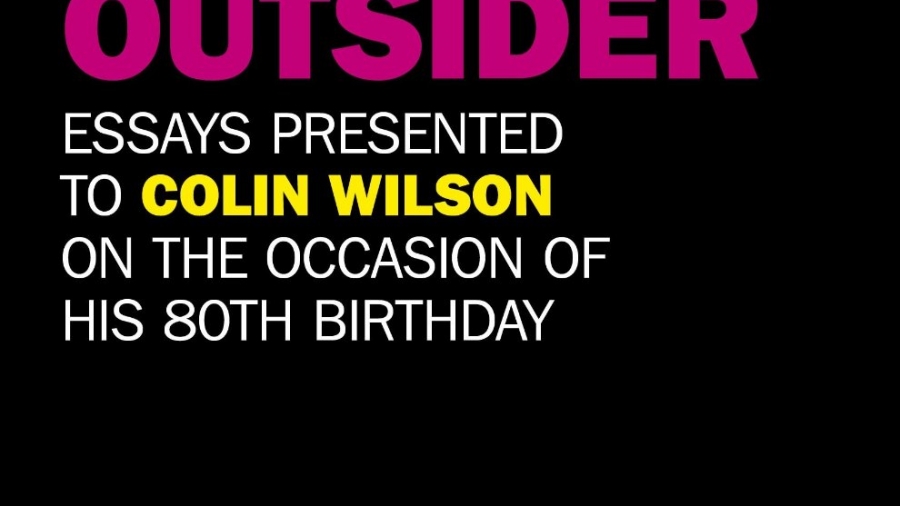 The former ‘Angry Young Man’ Colin Wilson, who achieved overnight success and fame in 1956 with his iconic study of alienation and transcendence The Outsider, and has gone on to produce over 170 books, including the classic study The Occult, is 80 on June 26th. Colin Stanley, his bibliographer, one of his many publishers, and editor of Around the Outsider, a celebratory collection of essays released by O Books on May 27th, looks back on Colin Wilson’s  remarkable life and assesses his work to date.

Around the Outsider: Essays presented to Colin Wilson on the occasion of his 80th birthday

Colin Wilson was born on June 26, 1931 in the East Midlands city of Leicester—the first child of Arthur and Annetta Wilson. When eleven he attended Gateway Secondary Technical School, where his interest in science began to blossom. By the age of fourteen he had compiled a multi-volume work of essays covering all aspects of science entitled A Manual of General Science. But by the time he left school at sixteen, his interests were already switching to literature. His discovery of George Bernard Shaw’s work, particularly Man and Superman, was an important landmark. He started to write stories, plays, and essays in earnest—a long “sequel” to Man and Superman made him consider himself to be “Shaw’s natural successor.”

After a succession of menial jobs, he spent some time wandering around Europe, and finally returned to Leicester in 1951. There he married his first wife, Betty, and moved to London, where a son was born. But the marriage rapidly disintegrated as Wilson drifted in and out of several unrewarding jobs. During this traumatic period Wilson was continually working and reworking the novel that was eventually published as Ritual in the Dark (1960). He also met two young writers who became close friends—Bill Hopkins and Stuart Holroyd. Another trip to Europe followed, and he spent some time in Paris attempting to sell magazine subscriptions.

Returning to Leicester again, he met Joy Stewart—later to become his second wife and mother of their three children—who accompanied him to London. There he continued to work on Ritual in the Dark, receiving some advice from Angus Wilson (no relation)—then Deputy Superintendent of the British Museum’s Reading Room—and famously slept rough (in a sleeping bag) for a time on Hampstead Heath to save money.

On Christmas Day, 1954, alone in his room, he sat down on his bed and began to write in his journal. He described his feelings as follows:

“It struck me that I was in the position of so many of my favourite characters in fiction: Dostoevsky’s Raskolnikov, Rilke’s Malte Laurids Brigge, the young writer in Hamsun’s Hunger: alone in my room, feeling totally cut off from the rest of society. It was not a position I relished…Yet an inner compulsion had forced me into this position of isolation. I began writing about it in my journal, trying to pin it down. And then, quite suddenly, I saw that I had the makings of a book. I turned to the back of my journal and wrote at the head of the page: ‘Notes for a book The Outsider in Literature’…”

Thus was his first, and most famous, book The Outsider conceived—a book that has, to date, been translated into over thirty languages and never been out of print in England and the United States.

It was published on Monday, May 28, 1956, to tremendous critical acclaim. “A major writer—and he’s 24” wrote John Connell in The London Evening News; “…one of the most remarkable books I have read for a long time” exclaimed Cyril Connolly in The Sunday Times; “Mr. Wilson’s book is a real contribution to our understanding of our deepest predicament”  asserted Philip Toynbee in The Observer; “The Outsider is the most remarkable book upon which the reviewer has ever had to pass judgement” judged Kenneth Walker in The Listener.

As a result of this he became a celebrity overnight, alongside John Osborne (whose Look Back In Anger had been premiered earlier that month), John Wain, Kingsley Amis and others, all considered to be ‘Angry Young Men’: a movement created by the media to fill the literary vacuum that then existed, and which was destroyed soon afterwards by the same hands. But out of the ruins emerged a writer and thinker who, some fifty-five years and 170 books later, has produced a polymathic body of work unparalleled in post-war English literature.

In 1966 he completed his important ‘Outsider Cycle’ with An Introduction to the New Existentialism: “If I have contributed anything to existentialism—or, for that matter, to twentieth-century thought in general, here it is…” he declared in a new introduction to a 1980 reprint of this title.

Works of non-fiction were generally accompanied by novels—each entertaining in its own right, but also blatantly making use of various genres in order to put his philosophical ideas into practice. These books, which appeared in a steady stream throughout the 1960s, were usually either given dismissive reviews by the critics, or, worse still, totally ignored.

In 1971, however, the critical tide turned when he published his first commissioned work—a substantial volume entitled The Occult. Since then a number of important (and many secondary) works have appeared. Among the important ones I would list: New Pathways in Psychology (1972), a book about the celebrated American psychologist Abraham Maslow; The Craft of the Novel (1975) in which he propounds his theory of existential criticism (assessing writers for what they have to say rather than how they say it, in particular what they have to say about the meaning and purpose of life); Mysteries (1978) an equally bulky sequel to The Occult; Frankenstein’s Castle (1980) a psychology book explaining the ‘double brain’ theory; Access to Inner Worlds (1983) a practical philosophy book that should be considered as a pendant to the Outsider Cycle; the enormously impressive Criminal History of Mankind which first appeared in 1984; The Essential Colin Wilson (1985) which was a compendium of past work edited by Wilson himself; and Beyond the Occult (1988) which completed the vast ‘Occult Trilogy’.

Colin Wilson’s literary output is staggeringly prolific. But whether writing psychology, true crime, unexplained phenomena, pre-history, the occult or novels, a positive philosophy of optimism pervades all his work, both popular and academic:

“The problem that lies at the heart of my work is the problem of the curiously unsatisfactory nature of human consciousness. Human beings know what they don’t want far more clearly than they know what they do want. The paradoxical result is that man is magnificent in crisis; yet as soon as life begins to flow smoothly, he becomes oddly bored. There is an absurdity in this situation—rather like buying a car that will do ninety miles an hour in reverse, and only ten miles an hour going forward.”

Colin Wilson believes he has found the answer to this crucial problem through his association with Abraham Maslow, in particular Maslow’s concept of ‘peak experiences’ (those sudden moments of joy and affirmation that all psychologically healthy people experience with a fair degree of frequency). He is convinced that if we can make the effort and learn to encourage these moments of affirmation, not only will we live more vital and appreciative lives but this will trigger a change in consciousness that will change everything.

So what of the future? There are more Colin Wilson titles in the pipeline: a book about Shakespeare; and a huge sequel to his novel The Space Vampires (which was filmed as Lifeforce by Tobe Hooper in 1985). Watkins Publishing has just re-released his Supernatural: your guide through the unexplained, the unearthly and the unknown. His 1961 novel Adrift In Soho is about to be reprinted by Five Leaves Publications to coincide with the release of a feature film, by Pablo Behrens, due to be shot in London this autumn. My collection of Colin Wilson’s work now forms the basis of an archive at Nottingham University, here in the United Kingdom, known as The Colin Wilson Collection. It is hoped that this will be opened for the use of scholars and researchers, in July 2011.

Colin Stanley is a freelance writer and Managing Editor of Paupers’ Press. He is the author of two experimental novels and edits the series ‘Colin Wilson Studies’ which features extended essays on Wilson’s work by scholars worldwide.