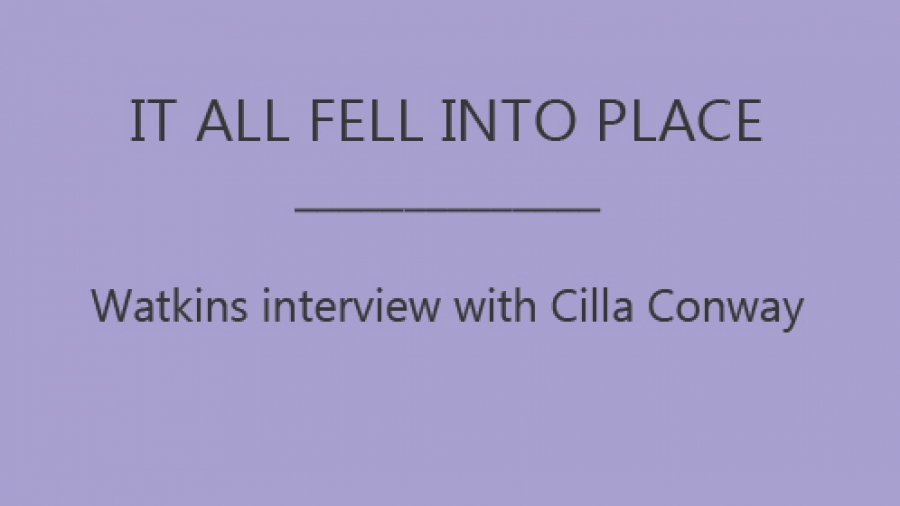 [dropcap]C[/dropcap]illa Conway is an artist, writer and tarot consultant. She is the author of The Intuitive Tarot, published by St. Martin’s Press in 2004, and the Devas of Creation. In 2008 she completed an MA in Psychotherapy & Healing Practice. She is a tarot consultant in Watkins every Tuesday.

W: Can you tell us about your experience and what made you decide to become a tarot reader?

C:I started reading the tarot around 1973 after seeing a programme on the cards on a little B&W television. Initially I thought the cards were very ugly but a few months later I decided I had to get a deck. Unfortunately, though, I found it impossible to work with these cards, so I began to paint my own, learning the basics of tarot as I went on. About a year later,I was doodling one evening. Looking down I saw I had drawn The Fool – or perhaps he had drawn himself. His eyes were utterly compelling, drawing me in. It was almost like I could feel the heat of the sun behind him, in this strange Otherworld he brought in with him. I realised immediately that this was the sort of deck I wanted to paint. The next day I designed The Magician and he also seemed to come from the same world, and have the same numinosity. Gradually all the Major Arcana came through, though it took quite a long time (about 6 years) before I completed the whole deck. By the time I finished in 1981, I knew the cards well and started to read with them. This deck made reading so easy I could hardly believe it. At that stage I was working in a huge oil company and I did quite a lot of readings for people there, as well as friends. People began to ask if they could buy the cards, but it seemed impossible to get publishers interested, so I just carried on for the next twenty years – reading cards, learning and painting.

W: What was the turning point?

C: The turning point came in 2001. I had finished a part-time degree in art, left my corporate job without having any idea of what I was going to do in the future, and met a group of druids including their chosen chief, Philip Carr-Gomm. Philip was getting his own deck painted at the time. Taking my courage in both hands I showed him my own deck. He really liked them, lent me a draft proposal and recommended a publisher. Over Christmas 2002, I drafted out my own proposal and sent it in, and the publishers contacted me the next day (at that time I didn’t realise how unusual that was), saying they liked the cards very much and asking if they could see the originals. They mocked up a deck for the London Book Fair taking place in the next few weeks (without realising, I’d managed to get the timing completely right) and the deck was accepted for publication by St Martin’s Press.

So by 2003 I realised that as I was to be a published artist / author (I was writing the book to accompany the cards), I should begin to read professionally. I knew quite a few people at Watkins, they had a vacancy and it all fell into place, just like that.

W: You are working on a new tarot deck that will be available to the public soon. How did this differ from the others?

Two or three years ago Klaus (one of the staff at Watkins) showed me a postcard someone had sent to him from St Catherine’s monastery in Sinai. It immediately struck me as the Tarot Hermit. Like my original Fool image, it struck me with a kind of instant recognition. I started to think about a Byzantine tarot deck – I knew very little about byzantine art at the time, but the seed was there. About 3 months later one of my American clients asked if I was going to the launch of John Matthews’ Nostradamus Tarot and, as I hadn’t seen her for some time, I came into London for it. When I saw John I mentioned my interest in a Byzantine deck. Coincidentally, he had also been interested in the subject for years. We decided to collaborate on the deck – and, three years later, it has just been completed. It will be published in 2015.

W: It seems you developed your intuition while painting the cards. Did you realise this at the time?

C: I suppose I did, though I never thought about it too hard. I just did what I thought would work best given the meaning (I had about 5 books that I consulted for interpretations, did a small sketch, and painted up the one that looked the best). Later on I realised I’d been using my intuition the whole time and with tarot, of course, that is the best way. Some people try to learn the meanings of the cards by rote, but I could never do that.

W: What is spirituality for you?

Spirituality is the sense of connection with something Other, something numinous and powerful. My second deck, the Devas of Creation, bring this out quite clearly I think. In my first deck, The Intuitive Tarot, there was a sense of connection to another world – like the reflection in a pool. But in the Devas of Creation you sense a whole different dimension. Painting that deck I experienced the phenomenal beings that comprise the universe. The Devas are real beings – energy beings – that can and do communicate with us. This is done mostly through synchronicity or dreams; they are also guides and teachers. Working with them has become my spiritual path.

Images of The Intuitive Tarot

W: I am holding your Devas of Creation and they really feel very special. Did you have a reference before painting them?

Well, the Devas are not a tarot deck – it’s an oracle deck, that is they don’t follow the same format of tarot. There are 72 cards, and I had no reference. I began by saying I would paint a deck of angels as they really are – i.e., if you met one you’d be shaking for a week. The first card I produced was The Sun and as soon as that came through, I thought that what I was accessing was energy rather than angelic. However, after the Sun came some very beautiful high-level angelic images, which amazed me as I’d never painted anything like them. After a while, as I kept on painting, it became apparent that this was my view of creation. The first half of the deck depicts pure energy – the Void, the Big Bang (Divinity) and creation, the angelics, and as the energy gradually slows shadow energies creep in. At the same time the Divinity is creating matter, so the second half of the deck depicts space, our solar system, and the different aspects of life on earth.

W: How did you develop your intuition? Do you do have a little ritual or say a prayer before a reading?

C: No, I don’t do anything like that. I know people clean their cards or pray before a reading but I never have done. I suppose I feel very in tune with both decks of cards – as soon as I get the decks out, they work for me.

W: What was your most meaningful reading?

C: I don’t think there’s one most meaningful reading, but every now and again, someone turns up for a reading and says: ‘I didn’t know why I got on the train toay, but now I realise I came in to see you.’ For some people the reading is exactly what they need to hear at that precise time. It can be life-changing. So it’s really meaningful for me too.

W: What are your suggestions to people who buy your decks?

C: I would hope that they really work with them and learn from them. That they don’t keep them hidden in a box!